And Adam said: This now is bone of my bones, and flesh of my flesh; she shall be called woman (אִשָּׁ֔ה, γυνή, virago) because she was taken out of man.

A virago is "a man-like woman," according to Lewis & Short, who quote usages in that sense predating St. Jerome.

In the Hebrew text, there is a play on words, as “man” is אִישׁ (ish), and “woman” is אִשָּׁה (isha). Jerome explains why he chose to use virago rather than the common word to refer to a woman, mulier.1 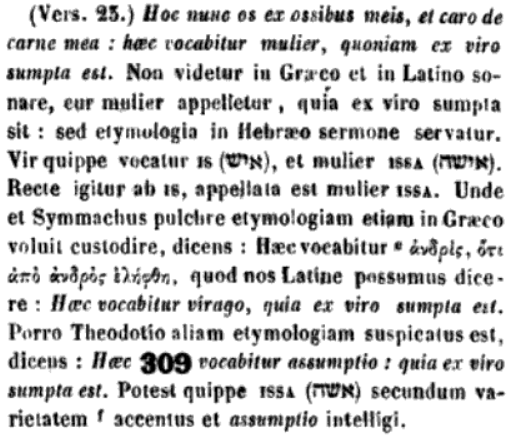 (Vers. 23.) Hoc nunc os ex ossibus meis, et caro de carne mea: hæc vocabitur mulier, quoniam ex viro sumpta est. (Now this is bone of my bones and flesh of my flesh. For this she shall be called “woman,” since she was taken out of man.) Neither in Greek nor in Latin does it appear to indicate why she is called a “woman” since she is taken out of man. But the etymology is preserved in the Hebrew language, because a man is called אִישׁ (ish) and a woman אִשָּׁה (isha). Therefore, rightly is a woman called אִשָּׁה (isha) from אִישׁ (ish). Whence, Symmachus had nobly wished to preserve the etymology in Greek, too, saying, “For this she shall be called «ἀνδρὶς ὅτι ἀπὸ ἀνδρὸς ἐλήφθη», which we can say in Latin, Haec vocabitur virago, quia ex viro sumpta est.

For this reason—to preserve the play on words—Jerome follows suit in Latin with vir and virago. Virago need not literally mean “man-woman.” It can simply describe a heroine, a woman who conveys manly qualities (in the eyes of the Romans), such as courage, heroism, etc.

According to the Wikipedia entry on “virago,”

Historically, the concept of a virago reaches back into antiquity where Hellenistic philosophy asserted that elite and exceptionally heroic men had virtus (Greek: ἀνδρεία, romanized: andreia). Virtus (once again linked to vir, the brave man abiding by society's highest values and ethics as opposed to homo, human being) defined the traits of excellence for a man in ancient Rome (and Greece), including valor and heroism, but also morality and physical strength. Women and non-elite or unheroic men (slaves, servants, craftsmen, merchants) were considered a lesser category, and believed to be less excellent in Roman morality. A woman, however, if exceptional enough could earn the title virago. In doing so, she surpassed the expectations for what was believed possible for her gender, and embodied masculine-like aggression and/or excellence. Virago, then, was a title of respect and admiration.

With respect to both Symmachus and Jerome’s translations of the Hebrew text, neither virago or ἀνδρὶς were the commonly accepted words to describe a woman. Those words were mulier and γυνή. Symmachus more or less fabricated ἀνδρὶς for the sole purpose of preserving in his Greek text the play on words that existed in the Hebrew text of Genesis 2:23.

For more reading on this subject, see the following:

Indeed, Fr. Cornelius à Lapide, S.J rightly unveils the symbolic meaning correlating the sexual differentiation to God and marriage. Also, he correctly explains that “the force of the Hebrew word,” that is אִישׁ, is not well-rendered by virago. However, אִישׁ itself does not ultimately signify that which inheres with the sexual nature (since the sexual differentiation points to two other invisible realities constitutive of human nature). It does primarily refer to the “male of animals,” as אִשָּׁה refers to the “female of animals” (which is basically all the fallen world, especially the culture we live in, knows). Their signified references (significations), however, lie beyond them. Thus, the key is to recognize the exact symbolic comparability between the אִישׁ and אִשָּׁה differentiation (Gen 2:22-23), referring as such to the sexual nature (in the visible order); and the זָכָר and נְקֵבָה differentiation (Gen 1:27), which concerns the two invisible categories of human nature signified by the former (the visible, sexual differentiation). The hinge of this revelation found in Sacred Scripture about the quiddity of man rests on the analogous correspondence between the visible and invisible differentiations of human nature as a tetra-structural whole.

Recall that זכר incorporates the following range of closely connected meanings: “memory,” “remembrance,” “acknowledgment,” “make known,” “being summoned to worship or court;” and, נקבה, the following range: “distinguish,” “passage,” “tunnel,” “opening,” “sudden concavity” [= capacity (the encompassing meaning with regard to the human soul and its union with God)], and even “curse” (consistent with how the curse of original sin came about, i.e. through the perversion of the intellect of the female help brought unto man, see Gen 2:20-22 and Gen 3:6). Hence, a fire (אֵשׁ) does remain there (in the relationship of אִישׁ and אִשָּׁה).

In relationship to the paradigmatic model of the Temple, one can better appreciate the underlying analogousness coupling זכר with the high-priesthood (Holy of Holies (3)), נקבה with the priesthood (Holy (2)), איש with the masculine order (Court of Men (1)), and אישה with the feminine order (Court of Women (0)). The remedy to the physical, moral, and metaphysical horror of homosexuality is given with such a structure, revealed to St. Moses on Mount Sinai, and ultimately raised up by the Incarnate Word after three days (John 2:19-22):

It also highlights the revealed anthropological reasons, besides the intrinsically valid argument of authority made by the Church, against ordaining women to the priesthood. Hence, the intrinsic falsity and deadly confusion at the heart of heretical churches “ordaining” women, a heinous aberration akin to the unnatural sin of sodomy. Maybe the Novus Ordo itself will eventually elect to do likewise one day, for the benefit of those who as yet do not recognize that it is not the Catholic religion.

Noteworthy to remember, in passing, that the Hebraic addition of a ה/h in אִשָׁה is the same as is made to the proper name of Sarai/שָׂרַי, who became Sarah/שָׂרָה (Gen 17:15).

ה/h is the key hieroglyphic letter of in-spiration, the literal Hebraic pictogram for “window” and “breath/wind” --> spiritum, also pictographically standing for the double active (0) and passive (3) intra-Trinitarian spiration prophetically expressed in the Thrice Holy Tetragrammaton:

SHE SHALL BE CALLED WOMAN, BECAUSE SHE WAS TAKEN OUT OF MAN. ] The translator does not match the force of the Hebrew word: it is clear that Adam is speaking Hebrew here. For virago does not signify nature or sex, but the virile power and spirit in woman. However, the Hebrew word אשה isscha does signify the nature and sex of a woman, because it is derived from איה isch (i.e., "man") by adding the feminine he. Sometimes she will be called vira (as the old Latins spoke, according to Sextus Pompey), because she is taken from man; thus Symmachus's Greek εχ του ανδρος ["from the man"], St. Jerome testifies, Theodotion turns into hæc vocabitur assumptio, quia de viro sumpta est ["she shall be called assumption, because from man she was taken out"]; for isscha itself derives from the root נשה nasa, i.e., "taken up", "brought", "carried"; but the prior version is genuine.

Not the answer you're looking for? Browse other questions tagged hebrew genesis septuagint latin-vulgate or ask your own question.