Revelation describes the height of the new Jerusalem to be equal to its base, which is 12,000 furlongs. Generally speaking one does not usually refer to the "height" of a city. I'm not sure what that means. I mean, as a type of the body of Christ I know it spans heaven and earth but in John's figure does it mean that its walls ascend that high?

[Rev 21:16 KJV] (16) And the city lieth foursquare, and the length is as large as the breadth: and he measured the city with the reed, twelve thousand furlongs. The length and the breadth and the height of it are equal.

And the city lieth foursquare, and the length is as large as the breadth: and he measured the city with the reed, twelve thousand furlongs. The length and the breadth and the height of it are equal. (Revelation 21:16, KJV)

If we take the Bible as it reads, and understand that the 12,000 furlongs are literal for the sides, and that the passage indicates that the dimension is the same for length, width, and height of them, we must understand all three dimensions to be literal. (One cannot reasonably equate a literal measure with a symbolic one: either they are all literal, or all symbolic.)

According to the Bible, the New Jerusalem will be in the north.

Beautiful for situation, the joy of the whole earth, is mount Zion, on the sides of the north, the city of the great King. (Psalm 48:2, KJV)

This makes sense, because only at the North Pole could a city of such size not disrupt the rotational orbit of the earth. At 1,500 miles high, the city will extend well into space.

Apparently, then, the Mount of Olives, upon which the city is to descend, following Jehovah's alighting upon it, will become the northernmost point of Earth once the city sets down upon it. We catch a glimpse of this in the prophecy of Zechariah.

I would submit that the measures are literal, and that the city will truly be of such grand size as would befit the new capital city of the universe.

Ultimately, some of this is just "seeing through the glass darkly" (1 Corithians 13:12), and we will not be able to grasp the full magnificence, size, or significance of these heavenly things until that time comes.

But as it is written, Eye hath not seen, nor ear heard, neither have entered into the heart of man, the things which God hath prepared for them that love him. (1 Corinthians 2:9, KJV)

I raised this question because I found the idea of high walls, be they amethyst or opal, to be a grim, prison-like arrangement. However, in the dimension given in Rev 21, though the city is a cube of 1500 miles, the wall of the city only goes up 72 yards:

[Rev 21:15-17 NASB] (15) The one who spoke with me had a gold measuring rod to measure the city, and its gates and its wall. (16) The city is laid out as a square, and its length is as great as the width; and he measured the city with the rod, fifteen hundred miles; its length and width and height are equal. (17) And he measured its wall, seventy-two yards, according to human measurements, which are also angelic measurements.

This answers my original concern which is the prison-like effect of living within walls. I think the walls in such a city are more adornment for her nuptials.

The other 1,499 miles of city would have no such visible structure. The true wall of protection for all 1500 miles is the LORD. This is reflected in this image: 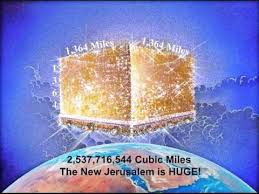 Note: In this image the new Jerusalem is in the sky, before it descends. After it descends it is on earth and in the sky in that its base is on the earth while it extends into heaven. Inside are angels going up and down on ladders (or maybe steps?):

[Gen 28:12, 17 NASB] (12) He had a dream, and behold, a ladder was set on the earth with its top reaching to heaven; and behold, the angels of God were ascending and descending on it. ... (17) He was afraid and said, "How awesome is this place! This is none other than the house of God, and this is the gate of heaven."

There are many such takes on prophecy in the NT that seems to contain a tweak but upon further reflection, contain a deeper truth for those inclined to go treasure seeking.

All earthly governance, economics, societal systems, and even the church are pyramidal in structure. Revelation 21 presents a description of the future structure of all governments, economic systems, and the society. This future system will be shaped like a cube, with all sides (length, Breath, and height) equal in dimension, a decentralised, and distributed system with no central authority. This system will enable this future human society to live in accordance with God's original plan.

When this system emerges, it will be so alluring that people will be immediately drawn to it (from the north, south, east, and west) with the result that every other centralised financial and governmental structures will become obsolete (no more seas). Its large size represents its substance. The precious stones at its foundation represent its allurement. Its thick walls (144 cubits = 66 meters) represent strength and security. The twelve foundation with the names of the apostles represents truth and transparency (absence of corruption). The gold streets represent wealth and prosperity.

The bottom line is this. Over the next several years, the world will transition into a prosperous resource-based economic and governance system with no visible central authority and powered by a decentralised, transparent, and immutable operating philosophy based on emerging blockchain technologies. God will bring this to pass in his own time and within the lifetimes of most of us alive today.

There is a difference between walls and walls. In a literal sense there are intruder protective walls, as well as house walls. And in a symbolic sense there are “walls” of water called tsunamis; “walls” of moving snow called avalanches, etc.

An explanation of New Jerusalem's huge height is that the city's top part is of atmospheric nature, shining to produce light, because the Bible says that the Lord is the city's only source of light. Thus, the sun does not seem to exist anymore. And, with no sun the countryside would also need the light coming out from the walls of the city. In other words, the shining Holy City would act like a sun for much of the rest of the earth.

Rev 22:5 (NIV) There will be no more night. They will not need the light of a lamp or the light of the sun, for the Lord God will give them light. And they will reign for ever and ever.

A symbolic possibility, on the other hand, is that New Jerusalem is like a soccer ball; with 12 patches. Each tribe’s gate would then be a pearl seen from a distance (referring to the ball and/or the patches)

[At this stage in the discussion it must be pointed out that most translations notes the measurements of New Jerusalem in furlongs and stadia, which is 12000 furlongs/stadia. Not 1500 miles, as NASB has it, or 2400 km, as CEV has it.]

In this symbolic scenario “length, width, and height” stand for the following three different twelfths:

The 1st twelfth, the length, stands for the number of tribes. "Furlong/stadia" in the text (Rev 21:16) would then symbolically mean "populations". The 2nd twelfth, the width, would refer to the number of thousands of people in each tribe, and together with the length would equal 144000. The verse about the 144 cubit thick wall in Rev 21:17, would then be a symbolic people count; where cubit would stand for 1000.

And he measured its wall, one hundred forty-four cubits, the measure of man, that is of the angel. (BLB)

Thus, the symbolic length of New Jerusalem is 12 tribes; the symbolic width is 12 thousand people; together equaling a 144000 thick "wall" of people.

And lastly the 3rd twelfth, the height, would then refer to how many settlements there will be on the New Earth. If so, an intriguing possibility emerges: There will be twelve different New Jerusalems, with possibly eleven under construction at any given time. If so, there certainly will not be any eternal idleness in the New Earth.

The Greek word that has been translated to “street” is the word “πλατεῖα” (plateia). Besides “street”, this word can also mean “square”. It is therefore possible that the twelve parts of New Jerusalem has twelve central squares, distinguished from each other by various gemstone's different colour-shade.

”and the street of the city was pure gold, as it were transparent glass” (Rev 21:21)

The fact that the quartz; yellow jasper, looks like transparent gold is a striking coincidence.

"Jasper” is mentioned first so it is possible that "Jasper" is the capital of the twelve parts of New Jerusalem, and the place of God’s throne. And if the other cities, or suburbs, originally do not exist, they will be constructed later by the 144000 (Mat 7:13,14), who then first will occupy "Jasper City".

Furthermore, the use of the word “wall” in the head count of the population might mean that the 144000 like a moving tsunami wall will travel between the twelve parts of New Jerusalem, changing settlement twelve times a year. Twelve annual migration waves, in other words. The depiction of the tree of life growing on both sides of the river of life, bearing healing leaves and nourishing fruit twelve times a year, could be a symbolic rendition of this event. (Rev 22:2)

So, the answer to the question: "In Revelation 21:16 do the walls of the new Jerusalem rise 12,000 furlongs?"; depends very much on if it was a literal or symbolic vision John saw.

It's describing a pyramid shape. Equal Length and breadth make a square, and equal height meeting at the pinnacle or summit where the 'capstone' sits or the 'chief cornerstone" make its point. Who is the capstone? Think about it. Jesus is. Zechariah 4:7, Psalm 118:22, Matthew 21:42, Mark 12:10, Luke 20:17, Acts 4:11 Capstone definition - crown, summit, the highest point, peak, top. In Strong's Concordance number 204 the definition is belonging to the extreme corner, top, or uttermost part.

Jesus is also described as the 'cornerstone'.

The cornerstone is where two walls join to form a solid foundation, such as in the base of the pyramid. Cornerstone definition - it is the Rock upon which the weight of the entire structure rests. A sure foundation. Isaiah 28:16, 1 Peter 2:6, Ephesians 2:20, 1 Corinthian 3:11. In Strong's Concordance number 1137 the definition is an angle, corner, quarter.

Not the answer you're looking for? Browse other questions tagged revelation symbolism or ask your own question.