What is the argument for editing the term πορνείᾳ from scripture in Romans 1:29?

In the Byzantine text πορνείᾳ is present, and other later manuscripts do not show it . The King James translators of Rom 1:29 include the term, defined as "fornication". Most other modern translations do not (but they do not add the usual footnotes like 'some earlier manuscripts include...') In their NT lexicons, neither Friberg, Gingrich nor Danker include Rom 1:29 in their lists for quoting the use of πορνείᾳ .

Is there some obvious evidence for corruption of the BYZ text in this instance? (margin notes accidentally included, or something like that). Thanks for any help.

Rom 1:29 has several sets of variations among the MSS, mostly involving the order of the three words, πονηρίᾳ πλεονεξίᾳ κακίᾳ. However, the OP asks specifically about the Byzantine texts which includes an extra word, πορνείᾳ, in this list whose position also varies.

Amongst the original MSS, those that omit πορνείᾳ include (century dates in brackets) from UBS5:

Amongst the original MSS, those that include πορνείᾳ include (century dates in brackets) from UBS5:

It is immediately clear that the earliest MSS omit πορνείᾳ and the majority of later MSS include it. Hence the distinction in the edited GNT's above.

Bruce Metzger in his Textual Commentary on the GNT opines as follows: 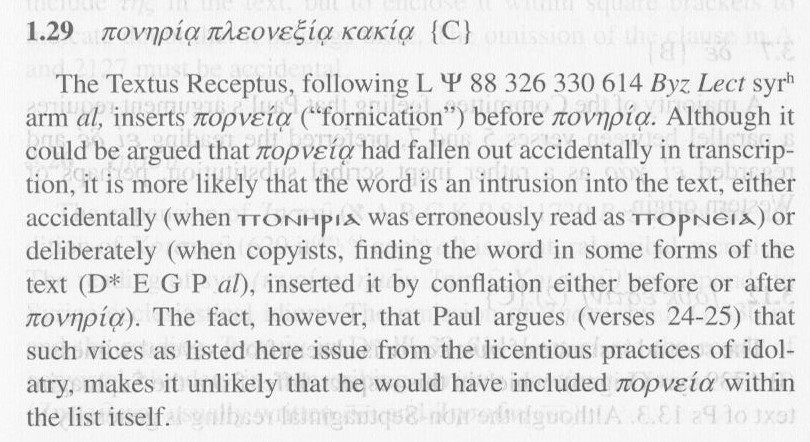 The simple reason that NT lexicons, such as Friberg, Gingrich nor Danker do not list πορνείᾳ in Rom 1:29 is that they are based on NA28/UBS5 which omits the word in Rom 1:29. However, my 3rd edition of BDAG lists it as a variant reading.

Not the answer you're looking for? Browse other questions tagged romans textual-criticism or ask your own question.

1
In Romans 11:16, what is Paul's argument?
1
What are the sources for the textual variants of Romans 8:1?
4
What is the BEST Textual Cristicism argument for keeping "us" in Revelation 5:9 and 10?
1
In Hebrews 1:3 is "by himself" original?
3
Rom 9:17: "For the scripture saith unto Pharaoh"?
1
Romans 13:9, what is the accurate text? With or without "false testimony"?
4
Why do most modern Greek text editions drop "that ye should not obey the truth" in Gal 3:1?
3
Why did Textus Receptus add "prōtotokos" in Matthew 1:25, or why did the greek NU-Text omit "firstborn" before son?