Why is it that in John 3:3 the ESV translates “be born from above” to “is born again”?

I was told that ESV uses the oldest Greek manuscripts to translate the scripture literally from Greek into English.

Is it "born again" in the oldest manuscripts?

If we check the interlinear bible { John 3:3 interlinear } and the Greek we never find Jesus using the words "born again".

Which transcript is the interliner bible using?

The matter in dispute here is NOT the Greek text but the translation of a single word, ἄνωθεν (anōthen). This is a simple preposition for which BDAG provides four basic uses:

In the above extract from BDAG I have only included the Bible references and have not included BDAG's numerous extra Biblical sources and examples.

The problem in John 3:3 is should ἄνωθεν (anōthen) be translated "from above", or "again"? In this case, both are theologically correct (see also John 3:31). My personal view is that, probably, both are intended: converts need to be born again (= anew) but NOT as Nicodemus suggested from earthly origins, but "from above". Indeed, as the foot notes in the ESV explicitly point out,

Or, from above, the Greek is purposely ambiguous and can mean both again and from above, also verse 7.

Except a man be born again, he cannot see the kingdom of God.--Our translators have followed the ancient expositors in giving the alternative renderings "born again" and "born from above" (margin). Chrysostom notes the two currents of interpretation in his day; and in our own day the opinions of scholars, whether we count them or weigh them, may be equally claimed for either view. There can be no doubt that the Greek word (ἄνωθεν) is found with both meanings. It is equally certain that St. John elsewhere uses it in the local sense "from above" only (John 3:31; John 19:11; John 19:23); but these instances are not sufficient to establish an usus loquendi, and the sense here, and in John 3:7, must be taken in connection with the meaning of the verb. (Comp. the same word in Luke 1:3, "from the very first," and Galatians 4:9, "again.") What has not, perhaps, been sufficiently noted is, that the Greek word is not the true key to the difficulty, and that its double sense has led men to seek the meaning in a wrong direction.

The Pulpit commentary makes extensive remarks about this as well - too many to be repeated here.

As the notes in the ESV state, the Greek is ambiguous:

[b] John 3:3 Or from above; the Greek is purposely ambiguous and can mean both again and from above; also verse 7

ἄνωθεν can mean from above, from the first, or anew, over again: 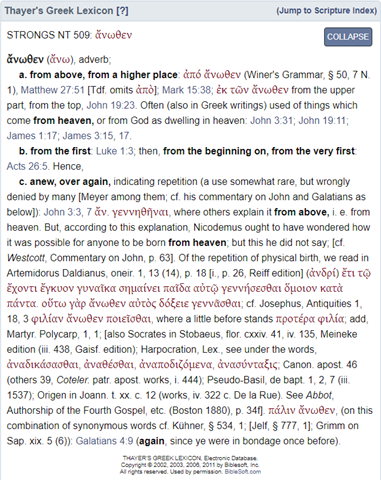 The ESV chose "again" because that is the meaning which best fits the immediate context:

Nicodemus said to him, “How can a man be born when he is old? Can he enter a second time into his mother's womb and be born?” (John 3:4)

Nicodemus took what Jesus said as "again." If the translator chose "born from above," Nicodemus' reaction makes little sense. The Interlinear translation chooses "above" because as the discussion progresses it becomes clear that is the meaning which best fits everything Jesus says (John 3:7-9). However, that choice only "works" if the one verse is viewed in isolation.

In actuality the ambiguity of the Greek is accurate as the only way a person may be born again is as a work of God. So if one is born again, it was an act of God (from above):

Not the answer you're looking for? Browse other questions tagged greek word-study textual-criticism translation-philosophy or ask your own question.

25
What does “born again” from John 3:3 mean?
5
Is the word “begotten” in John 3:16 of Authorized Version a problem that creates confusion when establishing the Deity of Christ?
4
What does ανωθεν mean in John 3:3?

29
Is NWT's translation of John 8:58 reasonable?
9
Is 1 Corinthians 9:27 about literally beating oneself up?
73
In John 1:1c, should the Greek word θεὸς be translated into English as “a god” or “God”?
7
What is the proper interpretation of ἄνωθεν in Luke 1:3?
11
In Romans 11:4 why did Paul use χρηματισμός to introduce his quotation from the Elijah narrative?
2
Two N.T. verses in two different Greek Interlinears have differences that seem critically important so I ask for clarification
5
Is the word “begotten” in John 3:16 of Authorized Version a problem that creates confusion when establishing the Deity of Christ?
3
Is “again” a better understanding of ἄνωθεν in John 3:31 and is it possible John is saying the One coming again is ὁ ὢν?
1
Comparison of Vaticanus and Siniaticus in an interlineary
2
What does “anasteso” mean in John 6:39?