For Christ also suffered once for sins, the righteous for the unrighteous, that he might bring us to God, being put to death in the flesh but made alive in the spirit, in which he went and proclaimed to the spirits in prison, because they formerly did not obey, when God's patience waited in the days of Noah, while the ark was being prepared, in which a few, that is, eight persons, were brought safely through water. Baptism, which corresponds to this, now saves you, not as a removal of dirt from the body but as an appeal to God for a good conscience, through the resurrection of Jesus Christ, who has gone into heaven and is at the right hand of God, with angels, authorities, and powers having been subjected to him.

Thanks to the line in the Apostle's Creed that reads, "He descended into hell;", some commentators interpret the phrase "he went and proclaimed to the spirits in prison" to mean that Jesus went to hell (or the underworld or Hades) after his crucifixion and before his resurrection. Other phrases (e.g., "right hand of God") reinforce the connection.

But is that what Peter intended us to understand by this phrase? If not, what does it mean?

Active Oldest Votes
4
Want to improve this post? Provide detailed answers to this question, including citations and an explanation of why your answer is correct. Answers without enough detail may be edited or deleted.

Wayne Grudem wrote a rather thorough article on this subject for the Journal of the Evangelical Theological Society, in 1991. The article can be found online:

He Did Not Descend Into Hell: A Plea for Following Scripture Instead of the Apostles' Creed

I believe the article is also reproduced as an appendix to his Systematic Theology.

Obviously, from the title of the article, you can see the he concludes that the text does not refer to descent into hell. But regardless if you agree with his conclusions, he provides, again, a quite thorough discussion.

Yes, that is one interpretation of this text.

Luke 23:43 (KJV)
And Jesus said unto him, Verily I say unto thee, Today shalt thou be with me in paradise.

That interpretation (temporary paradise) along with the idea that Jesus descended into Hell are the two interpretations of the text.

When Jesus died on the cross, his body physically expired. His heart stopped beating and he physically died.

His humanity did not go into heaven--that is, not until three days later. So what happened after his death is that his body went into the grave, and his immaterial being went to the place where the righteous had then rested -- i.e., the place of rest within the underworld of Hades.

Peter is very explicit that the body of Jesus went into the grave, and that his immaterial being, which Peter calls the "soul" (Acts 2:27) went into Hades. Peter mentions the event a second time to provide emphasis (Acts 2:31).

Why did not the PERSON go to heaven?

In other words, his eternal life did not reunite with his body until Sunday morning -- the day of the resurrection.

To put it another way, the PERSON subsisted in two natures, and these two natures were split apart when he died on the cross. The humanity was further divided (broken) by the separation of soul (to Hades) and body (to the tomb).

So to summarize, in eternity past his divine nature was sired from the Father (the Old English word here is "begotten" -- that is, the PERSON was begotten by the Father) according to John 1:1-3 and 1 John 1:1-3. This occurred before the world existed (John 17:5). When Mary was later pregnant in Bethlehem, the PERSON then took on human nature, and so the PERSON was born a "second" time with respect to human nature; thus the PERSON subsisted in two natures, which were subsequently split when he died on the cross.

The most remarkable evidence of this venture into Hades is the parallel to the liberation from Egypt. Jesus is the greater Moses. His blood is the paschal lamb that redeems those who are slaves of sin (Egypt). He leads the captives free like Moses. He subsequently renders the powers of sin (Egypt) powerless through the "water" of his eternal life, which goes straight to the Promised Land.

The chart below depicts the illustration.

So the soul of the humanity of Jesus was in Hades (also called Sheol) after his death on the cross. He led the Old Testament believers out of the Paradise of Hades and into the Paradise of Heaven according to Ephesians 4:8-10 in addition to Romans 10:7. These verses from Romans and Ephesians indicate that it was Jesus in the lower parts of the earth or abyss. So Hades was an actual area of confinement deep in the earth, since Old Testament saints did not have the gift of eternal life, thus they "retired" to the rest of the underworld after death; but it was a confinement related to spiritual death, and thus the parallel to Egypt, since it is sin which binds us. (The story of the rich man and Lazarus in Luke 16:19-31 provides a glimpse of this two-compartmented area of the underworld.) So the humanity of the PERSON was the first to emerge (be born) out of spiritual death, and so he is the "firstborn" from the dead (Rev 1:5). By inaugurating the New Covenant "through his blood" (Luke 22:20), he now makes eternal life available to all who believe in him so that they will be able to go directly into heaven (John 3:16 and John 3:36). There is therefore no more place of rest in the underworld after death for the righteous. Our place of rest is our inheritance in heaven (1 Pet 1:3-5), where he lives today.

19 And in this state he went and preached to the spirits in prison, 20 who had formerly been disobedient when God was patiently waiting in Noah’s day, while the ark was being constructed, in which a few people, that is, eight souls, were carried safely through the water. (NWT)

As the context indicates, Jesus was preaching to the angels that had forsaken their heavenly abode to dwell with and marry women.
So where are these angels? 2 Peter 2:4 gives us a clearer picture, but to understand its meaning let's look at the original Greek: 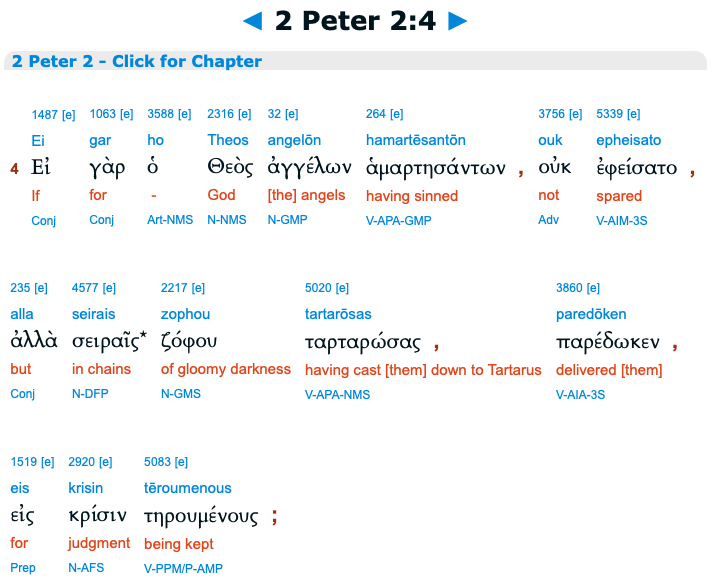 Here Peter mentions "having cast [them] down to Tartarus". So what is Tartarus? In the entry for ταρταρόω (tartaroó 5020), Strong's describes it as:

[In Greek mythology, Tartarus was a "place of punishment under the earth, to which, for example, the Titans were sent" (Souter).]

Greeks would have easily understood its meaning from their mythology. But what about us? How do we understand this Tartarus?
The Insight on the Scriptures article "Tartarus" brings out the following:

From these texts it is evident that Tartarus is a condition rather than a particular location, inasmuch as Peter, on the one hand, speaks of these disobedient spirits as being in “pits of dense darkness,” while Paul speaks of them as being in “heavenly places” from which they exercise a rule of darkness as wicked spirit forces. (2Pe 2:4; Eph 6:10-12) The dense darkness similarly is not literally a lack of light but results from their being cut off from illumination by God as renegades and outcasts from his family, with only a dark outlook as to their eternal destiny.

So Jesus did not go to Hell, or Hades, to preach to these "spirits in prison" but it was after his resurrection that he was to proclaim a message of victory over them.

For Christ died once for all time for sins, a righteous person for unrighteous ones, in order to lead you to God. He was put to death in the flesh but made alive in the spirit.–1 Peter 3:18 (NWT) [bold mine]

Commenting on this text, Vine’s Expository Dictionary of Old and New Testament Words says: “In I Pet. 3:19 the probable reference is, not to glad tidings (which there is no real evidence that Noah preached, nor is there evidence that the spirits of antediluvian people are actually ‘in prison’), but to the act of Christ after His resurrection in proclaiming His victory to fallen angelic spirits.” (1981, Vol. 3, p. 201) ["What was the objective of Jesus' preaching 'to the spirits in prison'? Insight on the Scriptures]

If we are using the Apostles Creed to justify Jesus preaching to 'the dead' while he is 'in the grave', the creed is either not aligned with scripture or we are reading more of it than it intends.

...was crucified, died, and was buried;

he descended to the dead.

On the third day he rose again;

Peter IS an apostle, he has written (what we have accepted as) God's inspired word.

For Christ also suffered for sins once for all time, the just for the unjust, so that He might bring us to God, having been put to death in the flesh, but made alive in the spirit; 19 in which He also went and made proclamation to the spirits in prison, 20 who once were disobedient when the patience of God kept waiting in the days of Noah...

So he cannot have preached while dead, because he had not been made alive in the spirit - which happened after the 3 days and nights.

Side note, he is not preaching to dead people, but spirits perhaps fallen angels

For if God did not spare angels when they sinned, but sent them to hell, putting them in chains of darkness to be held for judgment; 1 Pet 2:4

Not the answer you're looking for? Browse other questions tagged jesus 1-peter death or ask your own question.

13
Are the 'ten virgins' told in Jesus' parable multiple brides or just general wedding party?
15
What was meant by "paradise" when Jesus spoke to the thief on the cross?
5
Did Jesus ascend to Paradise on the day of the crucifixion? Is this a contradiction?
10
Who did Jesus preach to in 1 Peter 3:19?
10
"the first day of the week" in 1 Corinthians 16:2
5
Does "asleep" in 1 Corinthians 15 mean that the dead are unconscious prior to the resurrection?
5
At what point in his narrative does the prophet Yona appear to die?
2
When were the spirits in 1 Peter 3:19-20 disobedient?