In Zechariah 10:4, does 'noges' have negative connotations?

In Zechariah 10:4 all of the noges ֵ(נוֹגֵש) were mentioned to come from/exit from Judah. In most translations it is rendered with a neutral term, "ruler." However, other usages in the Hebrew Bible are clearly negative, (Ex. 3:7, 5:13-14, 1 Sam. 14:24, Job 3:18, Is. 9:4 and Zech. 9:8). Is there an exegetical contextual reason why translators do not go with a negative-leaning term, like "oppressor" in this passage?

Could a translation like, "Out of them, the chief, out of them, the peg, out of them the battle bow, every oppressor together will exit from among them." work in context? This would preserve the common negative connotation of the term noges.

As noted, a negative sense of נָגַשׂ nagas, is the most appropriate: 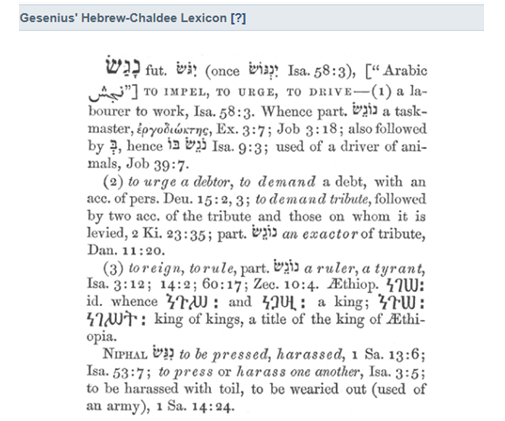 Despite this, in Zechariah 10:4, נָגַשׂ is most often (50%) translated as an indeterminate "ruler" and the other half is divided among terms having either a military sense or the negative:

The NET opts for "ruler" and includes a translation note:

From him will come the cornerstone,4 the wall peg,5 the battle bow, and every ruler.6 [NET2]

6 tn This is not the usual word to describe a king of Israel or Judah (such as מֶלֶךְ, melekh, or נָשִׂיא, nasiʾ), but נוֹגֵשׂ, noges, “dictator” (cf. KJV “oppressor”). The author is asserting by this choice of wording that in the messianic age God’s rule will be by force.

Essentially the translator understands the passage within the context of the Messianic age. In this inherently "positive" era, there will be a nagas who seemingly is successful in battle:

And they will be like warriors trampling the mud of the streets in battle. They will fight, for the LORD will be with them, and will defeat the enemy cavalry.7

Ignoring the negative lexicon in favor of the more neutral "ruler" may be justified if one sees the ruler as a "ruler" in the military sense (commander, leader, or officer). Translators who understand the role of the nagas in support of the LORD, can justify replacing the negative meaning with something neutral or simply emphasize the military position.

On the other hand, military success is hardly a compelling reason to discount the literal meaning. As anyone who has served in the military knows, many successful leaders were taskmasters, demanded tribute, and could accurately be labeled a tyrant or an oppressor, exactly as the lexicon states.

Additionally, another a good reason for choosing to keep the negative meaning is by considering what the ruler is not known as. As the NET observes, the ruler is not a king (מֶלֶךְ melek) or a prince (נָשִׂיא nasiy'). In the Messianic age, it is unlikely a Davidic ruler would be called a נָגַשׂ nagas. Further, Zechariah describes a future day in which the LORD will battle those who come against His people and their city:

A day of the LORD1 is about to come when your possessions2 will be divided as plunder in your midst. For I will gather all the nations against Jerusalem3 to wage war; the city will be taken, its houses plundered, and the women raped. Then half of the city will go into exile, but the remainder of the people will not be taken away.4 Then the LORD will go to battle5 and fight against those nations, just as he fought battles in ancient days.6 (Zechariah 14:1-3)

In the final battle, there will be opposition to the LORD. So the advent of the Messianic age is not necessarily one in which all rulers will be "good;" some may be oppressive and convince others to stay on and fight against Jerusalem. Given this uncertainity on who is truly for and against the LORD, the King James family and those who choose "oppressor" or "exactor" may be right to preserve the literal meaning.

Other NET notes:
Chapter 10:
4 tn On the NT use of the image of the cornerstone, see Luke 20:17; Eph 2:20; 1 Pet 2:6.
5 tn The metaphor of the wall peg (יָתֵד, yated), together with the others in this list, describes the remarkable change that will take place at the inauguration of God’s eschatological kingdom. Israel, formerly sheep-like, will be turned into a mighty warhorse. The peg refers to a wall hook (although frequently translated “tent peg,” but cf. ASV “nail”; TWOT 1:419) from which tools and weapons were suspended, but figuratively also to the promise of God upon which all of Israel’s hopes were hung (cf. Isa 22:15-25; Ezra 9:8).
7 tn Heb “and the riders on horses will be put to shame,” figurative for the defeat of mounted troops. The word “enemy” in the translation is supplied from context.

Yes. Which version are you using? Not every version has "ruler".

"From him [is] a corner-stone, From him a nail, from him a battle-bow, From him goeth forth every exactor together." (Zech 10:4, YLT)

An exactor is one who exacts, or takes from another.

An oppressor, exactor... one who uses his power to tyrannize and oppress the people.

The passage is about the judgment the Messiah would carry out against the wicked.

The ISV has "oppressive rulers". The JUB has "every oppressor," as does the WYC.

I suspect that the other versions that translate the word improperly as just "ruler" are reading a belief system into the the prophesy. The entire verse / context is of judgment.

Not the answer you're looking for? Browse other questions tagged hebrew word-study zechariah or ask your own question.