Naphtali touching the border of Juda?

In describing the borders of every inherited piece of land in the book of Joshua it is said that the border of Naphtali touches Judah at the Jordan on the east.

Then the border turned westward to Aznoth-tabor and ran from there to Hukkok, touching Zebulun on the south side, Asher on the west, and Judah at the Jordan on the east. (Joshua 19:34)

But when I look at a map I see the land of Naphtali to be way up north in Israel and Juda in the deep south. How should I read the phrase 'touching borders', since the only thing these two tribes had in common is the river Jordan? 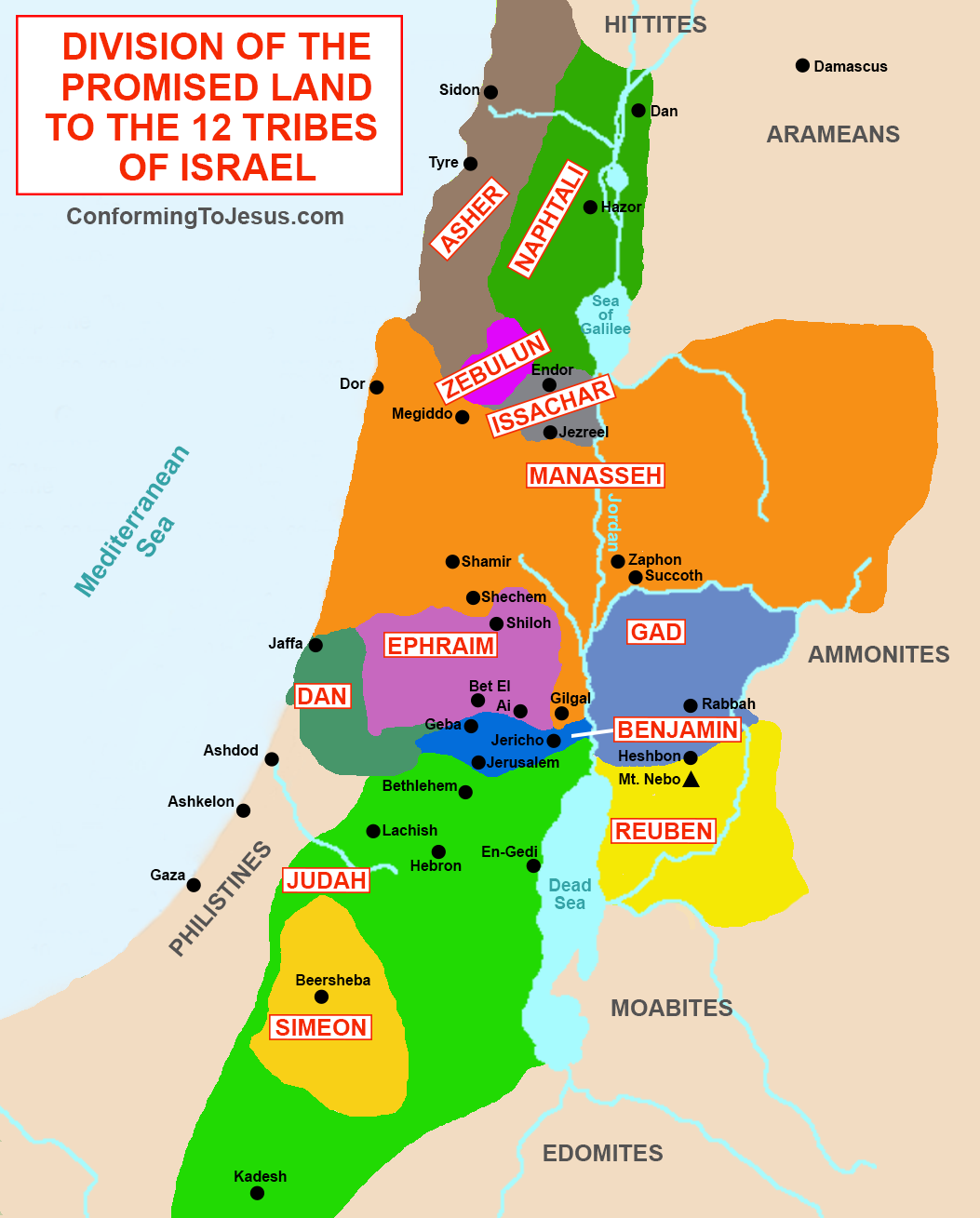 An excellent question that has been discussed at length and caused untold consternation for thousands of years. Here is my suggestion as to its resolution.

The text MIGHT be read that the eastern border of Naphtali was the same as that of Judah, namely, the Jordan River. This does not violate the text but allows the two territories to be separated as the map correctly suggests. That is, both had the same border (Jordan River) but did not touch.

The Pulpit commentary has another suggestion which is equally plausible:

We have it here clearly stated that Naphtali was bordered on the south by Zebulun, on the west by Asher, and on the east by "Judah upon Jordan." To Judah. These words have caused great trouble to translators and expositors for 2,000 years. The LXX. omits them altogether, rendering, "and the Jordan to the eastward." The Masorites, by inserting a disjunctive accent between them and the words that follow, would have us render, "and to Judah: Jordan towards the sun rising," or, "is towards the sunrising," a rendering which gives no reasonable sense. They unquestionably form part of the text, since no version but the LXX. omits them. A suggestion of Von Raumer's has found favour that the cities called Havoth Jair, which were on the eastern side of Jordan, opposite the inheritance of Naphtali, are meant. Jair was a descendant of Judah by the father's side, through Hezron. So Ritter, 4:338 (see 1 Chronicles 2:21-23). It would seem that the principle of female inheritance, having once been admitted in the tribe of Manasseh, was found capable of further extension. But to the majority of the Israelites this settlement would no doubt be regarded as an offshoot of the tribe of Judah.

While I agree that this passage gives a problematic description and appreciate user25930's answer, I think that the map you are using is not a particularly good one and that if you had a better map there might be a better explanation (maybe).

The biggest problem with the map you have (as concerns this case) is that it has Manasseh (both East and West) both running through the middle in one big impenetrable blob, but this is, I think, inaccurate.

The text, at Joshua 13:27 describes Gad as "having the Jordan as a boundary, to the lower end of the Sea of Chinnereth". So Gad's territory ran up the Jordan River to the sea of Chinnereth (Galilee), making a distinct break between the Manassehs. Your map also presumes that West Manasseh filled the space running South along the West side of the Jordan to Gilgal, but so far as I know, Joshua 16-17 doesn't describe this. In 17:7 it says that West Manasseh reached as far as Micmethath (the northernmost point of Ephraim), and verse 10 says that the Eastern border is Issachar (not the Jordan). So the West side of the Jordan river valley is left open and cartographers have little choice but to creatively guess at who got that area.

So, it is possible that there's a strip of land running down the west side of the Jordan which is unoccupied by any other tribe in the descriptions. I propose that Naphtali filled that narrow strip of land and reached down to Judah. I find some support for this in Deuteronomy 33:23, in which Moses blessed Naphtali, saying that they would possess "the lake and the south".

I compiled the map below using resources from BibleAtlas.org and many hours of other personal study. The tribal border outlines are my own: 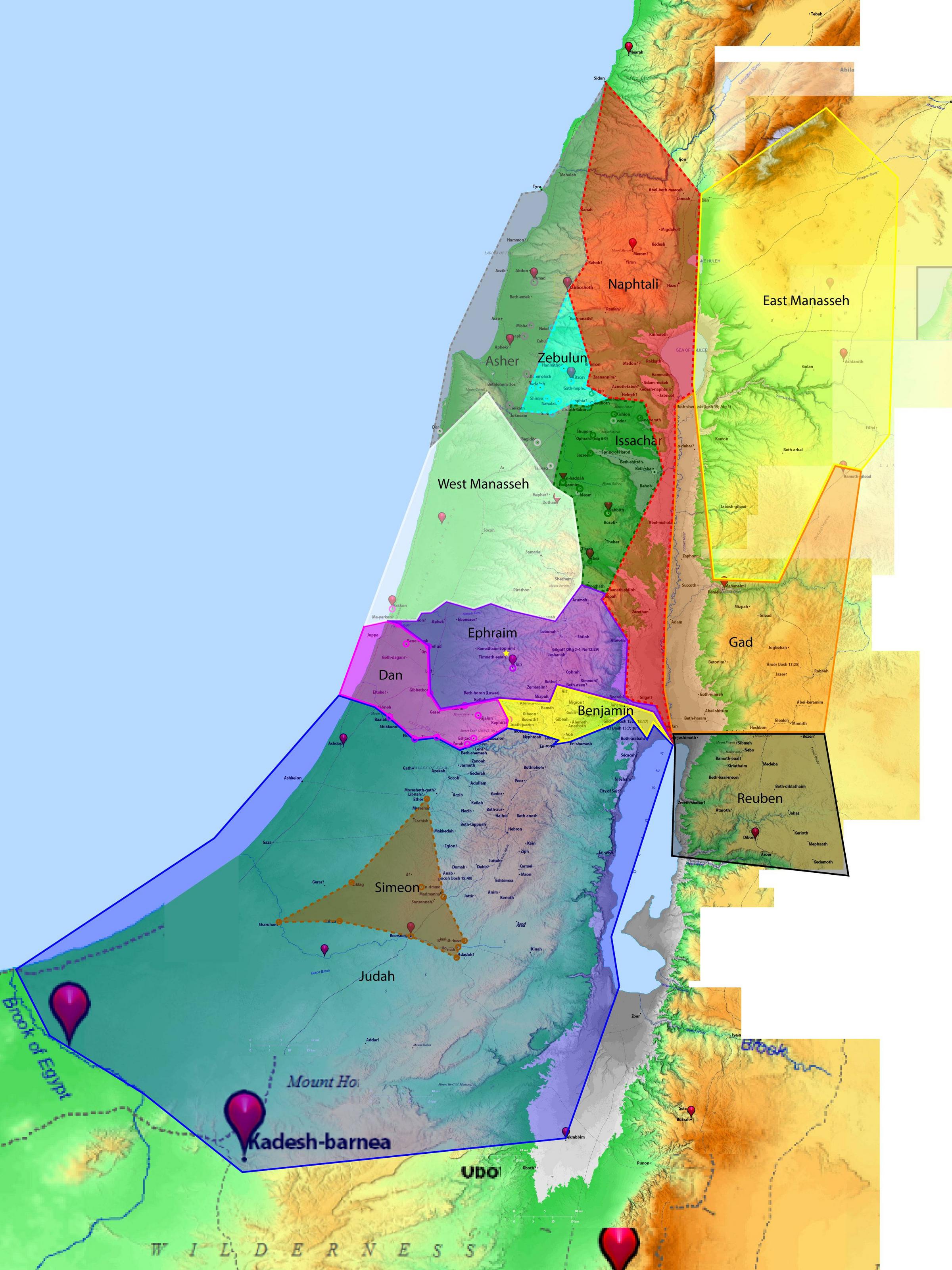 An updated version of this map (along with interactive layers showing more information), can be found here.

You can see here that Naphtali is East of Judah. This works with the King James translation that Naphtali was "to Judah upon Jordan toward the sunrising"

The big problem with that proposal is that the text does say that both Issachar and Ephraim reached the Jordan (your map doesn't show that for Ephraim). If both of them touched the Jordan, it seems that Naptali wouldn't have had room to fit past them. I propose the following possible solutions:

The reason those and other similar verses are confusing is because when it says that the border of a certain tribe continues on to some distant point then while the border may indeed continue to that point it may no longer be the border of that tribe but becomes the border of some other tribe.

Or maybe the land east to Nephtali indeed once belonged to Judah. Seems like no one has noticed this verse, 2 Kings 14:28 "Now the rest of the acts of Jeroboam and all that he did, and his might, how he fought, and how he restored Damascus and Hamath to Judah in Israel, are they not written in the Book of the Chronicles of the Kings of Israel? "

The land that King Solomon used to control is several times bigger than the land allotted in Joshua. Maybe the extra land to the east and north of Nephtali, comprising of Damascus and Hamath, indeed belongs to his own tribe, Judah. But this land later was lost to the King of Syria (1 Kings 20:34). 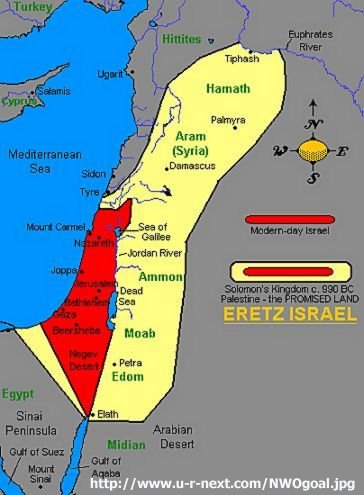 and to "Judah on the Jordan" to the East.

Most commentators believe this to be a placename, similar to "Bethlehem-judah" to distinguish from other Bethlehems - the name clarifies that this isn't the area of Judah, but Judah-on-Jordan, some city whose location has been forgotten, but one that is on (or near) the Jordan river.

the Preliminary and Interim Report (2:55–56) considers it “the corrupt form of a place name which at present cannot be reconstructed,” suggesting the translation “Jehuda at/on the Jordan.” [...] Barthélemy (Critique textuelle, 1:59) points to Wadi el-Yehudiyeh less than ten kilometers northeast of the mouth of the Jordan on the Sea of Tiberias.

2
Did the three tribes of Israel return to their lands before the complete conquest of the land in the book of Joshua?
0
Where did the Israelites get the old corn in Joshua 5:11?
2
Did Joshua break the covenant he had made with the Gibeonites in Joshua 9?
7
Was it Joshua or Levites who were to recite the blessings and curses?
2
Zebulun's territory isn't at the seashore
1
In Joshua 15:25 the amount of items in the list is different
2
Relation between Judges 4 and Joshua 11
2
Joshua 4:9 The fate of Joshua's twelve stones set up in the midst of the Jordan?
2
In Joshua, Israel defends the Gibeonites. Weren't all the inhabitants of the land to be killed?
4
Why does Joshua 24:15 refer to the Amorites and not to the Canaanites? Are they the same?