In the Peshitta NT, what was the original meaning of the word often translated "first day of the week"?

Is there an Aramaic word for "week" different from "Sabbath?"

Is the word for Sabbath used in the Peshitta New Testament in the following passages:

But on the eve of the Sabbath, when the first of the week was dawning, Maryam Magdalitha and the other Maryam came to see the tomb.—Matthew 28:1 (Aramaic Bible in Plain English)

But in the early morning in the first day of the week they came to the tomb when the sun arose.—Mark 16:2 (ABIPE)

But on Sunday morning, while it was dark, they came to the tomb and they brought the spices that they had prepared, and there were other women with them.—Luke 24:1 (ABIPE)

But on the first day of the week, in the very early morning while it was dark, Maryam Magdalitha came to the tomb and she saw the stone that had been removed from the tomb.—John 20:1 (ABIPE)

But when it was evening of the first day of the week and the doors were barred where the disciples were staying, because of fear for the Judeans, Yeshua came and stood in their midst and he said to them, “Peace be with you.”—John 20:19 (ABIPE)

In the first day of the week, when we assembled to break the Eucharist, Paulus was speaking with them, because the next day he was going to go out by himself and he prolonged speaking until midnight.—Acts 20:7 (ABIPE)

On every Sunday, let each person of you lay aside in his house and keep that which he can, so that when I come there will be no collections.—1 Corinthians 16:2 (ABIPE)

Is "Sabbath" plural or singular in the above passages?

Here's the problem concerning the singular/plural distinction: I found an online Peshitta forum post by Paul Younan (who prepared a scholarly Peshitta text) that mentions that there was no way to distinguish between the singular and plural in Aramaic until at least the 6th century. He states:

Notice the only difference between the two is the Syame (plural) dots above the letter Beth....

It's really an annoying feature of Aramaic. I can't believe that it took till the 6th-7th centuries for someone to come up with this brilliant idea of somehow differentiating between the singular and the plural.

Or, not having vowels. Ancient Akkadian had 'em - no problem with singular/plural, either.

It's strange - as time went on, rather than progressing - these writings systems digressed.

It's not just translators who got confused. The only way to tell was from memory or context - and sometimes both memory and context were lacking.

I will go through each verse individually and answer the questions, but before I do allow me to acknowledge my morphology sources: The first is A Compendious Syriac Dictionary, a Syriac dictionary founded upon the thesaurus syriacus of R. Payne Smith. According to this source (p. 558), the word for Sabbath / Saturday can also mean "week" depending on the context and other words used with it: 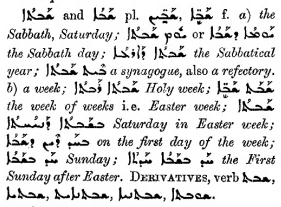 I have also cross-referenced the morphology using George A. Kiraz's Analytical Lexicon of the Syriac New Testament : Based on the SEDRA 3 Database of George Anton Kiraz. (Bellingham, WA: Logos Research Systems, Inc., 2003), although only the gloss is given by Kiraz (Sabbath; yet it is consistently translated by scholars as 'week' into English as noted in each case below).

So with all of that said, it is possible that some or all of this post is wrong, because almost 400 years transpired where no one knew which word was singular or plural except based on handed-down tradition. Younan believes that the Gospels were originally written in Aramaic and then translated into Greek, and commenting on the singular/plural problem he states,

Obviously, if as we contend the Greeks translated the Aramaic Gospels into Greek at a very early stage (perhaps even done by the Apostles themselves or their immediate successors) - then it would make sense that they would have made mistakes because of the singular/plural problem, prior to the invention of the Syame dots which were not around until after the 6th century....

To avoid getting into the 'chicken and egg' debate concerning the translation of the New Testament (which came first, the Aramaic or the Greek?), I will avoid any comparisons to the Greek text in this response and treat the Syriac Peshitta as an independent text.

So it appears that context will be our best (and potentially our only) friend when it comes to discerning whether the word should be translated as 'Sabbath' or 'week.'

It should be noted that every scholarly English translation of the Peshitta that I have referenced (Etheridge, Murdock, and Lamsa) translates the word as I have indicated in the above list. This is my basis for asserting what the best translation is in each case.

There is another verse that will help shed some light on this as well: Luke 18:12, which the KJV translates,

"I fast twice in the week, I give tithes of all that I possess."

The same word that can mean "Sabbath" or "week" is used in the Syriac Peshitta, again here as a feminine singular emphatic noun. However, the taw is used (which elsewhere this spelling change is consistent with 'Sabbath,' but again, I have found no scholarly literature mentioning this spelling difference as having anything to do with the translation - this is only my observation when reading the Peshitta text). Discussing this passage, Joe Viel says,

Fasting "twice each Sabbath" makes no sense. How do you fast twice a day? Do you eat non-stop except for two breaks????? There was a Jewish tradition of fasting twice a week, on Mondays and Thursday, that is well documented in the Talmud as well as other places, including some early Christian writings.

UPDATE: I asked a scholar trained in Syriac about this.

I hope this answer gives interested parties a good 'start' and a good introduction to the question. I am not sure anyone has explored this much further as of yet (research opportunity!), or if it is even possible to pursue it much further. Please post any supported revisions or other notable information in the comments (or edit this answer if warranted).

I am not able to paste Aramaic letters on my computer (or on this site) but you can see that the Sabbath and week are not the same. An example where both words are used is Mathew 28:1. The interlinear Aramaic and English version can be found here.

The literal Aramaic in English reads like this: “of the week the first as it was twilight of the Sabbath now in the evening”. In the ESV one reads “Now after the Sabbath, toward the dawn of the first day of the week”. In other words both say the same things and use a different word for the ‘Sabbath’ and for ‘week’. ‘The first of the week’ is distinguished from the word ‘Sabbath’ in Aramaic.

I do have an Analytical Lexicon of the Syriac New Testament, which is very close to the Aramaic from what I can tell, as the words for Sabbath and week look identical. From here I can see that Sabbath is ‘feminine, singular, emphatic’:

I hope this helps you. I do not know anything about the Aramaic or Syriac but I thought it would be interesting to crack open a couple digital resources I have that I have never used.

10
"the first day of the week" in 1 Corinthians 16:2
7
Why is 'Sabbath' often plural in the Greek text (both LXX and NT) yet translated as if it were singular?
6
In the Peshitta, what is the difference between the original word translated "Sabbath" and that translated "week?"