What is the logic used in Romans 7:1-2 to help us know our relationship with the Law?

Romans 7:1-2 Know ye not, brethren, (for I speak to them that know the law,) how that the law hath dominion over a man as long as he liveth? 2 For the woman which hath an husband is bound by the law to her husband so long as he liveth; but if the husband be dead, she is loosed from the law of her husband.

"The law has dominion/lordship over man as long as he lives."

By this I feel Paul is trying to say that the law has no dominion over man once he dies. Is that right?

God expressed himself in his creation. There is something to be seen of God and his purposes in all that he made, for without the Word was not anything made that was made. Nothing was haphazard ; all was according to design and purpose.

Thus male and female and the marriage union express something far greater than mere carnal flesh and blood and the means of procreation. There is something to be seen - ultimately of Christ and the Church, the Head and the Body, the Bridegroom and the Bride.

For the woman who hath an husband is bound by the law to her husband so long as he liveth; but if the husband be dead, she is loosed from the law of he husband. Romans 7:2

They are the bride which is to be married to another. But they cannot be married to Christ in their old condition, their first creation, their natural state. For the book of Ruth clearly shows us that there is another kinsman nearer to us - by nature, by our natural generation - than Boaz.

Howbeit, there is a kinsman nearer than I. Ruth 3:12 KJV.

Boaz had to deal with the nearer kinsman, first. Before redemption could occur. But the nearer kinsman - the more natural state, the closer relative, by generation - could not redeem. He cast off the shoe. He admitted he could progress no further. He yielded to Boaz.

Humanity, in Adam, is bound by law. For that is what Adam chose, as head of the race. Now, all who are born of Adam, are under the law, so long as they live.

But if they be dead, they are free.

Wherefore, Christ is come to redeem and to release and to unite with his own.

So, the old nature, our first condition by birth, is crucified with Christ. The old 'husband', that to which we are intricately and lawfully bound by our natural generation, is taken away in the death of Christ.

He took upon him the likeness of sinful flesh. And then, at Golgotha, was 'made' sin. He was 'effectively caused' to be sin (the word poieo covers both 'make' and 'do' in English and we need another way to express poieo in this particular place).

Thus, in the likeness of sinful flesh - and then, also, he 'caused' to be sin - then in death he took all of what we are (by nature) down into death.

Our 'husband' - that to which we were intimately and intricately bound, lawfully, by our natural birth - is dead : in him.

Thence we are free to be married to another, that is to say to Christ now risen.

Now risen from the dead, he dieth no more. He is now ascended into the heavens. Now, he is the Head over the body. He us united, judgment passed in righteousness, with his bride.

Understanding the Relationship between Man and Woman in the Marriage Covenant

When a man marries a woman, the man becomes the woman’s owner, or “lord.”1 Likewise, the woman becomes the man’s possession since he owns her. Accordingly, in Rom. 7:3, when the apostle discusses the woman hypothetically (“if”) marrying another man, he writes, «ἐὰν γένηται ἀνδρὶ ἑτέρῳ», literally, “...if she become another man’s.”2

In Greek, the husband becomes the wife’s κύριος, or in Hebrew, her בַּעַל (baʿal) or אָדון (adon). The literal translation of these words in English is “owner.” Hence, we have the ὁ κύριος τοῦ ἀμπελῶνος—“the lord (owner) of the vineyard,”3 the lord (owner) of the slave,4 and so forth. For this reason, the apostle Paul describes the married woman as «ἡ ὕπανδρος γυνὴ»—literally, “the woman under a man” (or even more literally, “the under-man woman”). He does so because the husband is κύριος over the woman just as a servant’s master is κύριος over the servant.

This relationship exists within the marriage covenant. As long as the man lives, the woman he is married to is his, and he has dominion over her as her κύριος. In fact, if we were to express this in Koine, we would say, «ὁ ἀνήρ κυριεύει τῆς γῠναικός»—“The husband is lord (owner/master) of/over the wife.” The Greek verb κυριεύω means “to be a κύριος (of/over someone/something).”6

If she “become another man’s,” she becomes an adulteress, because no man can sever what God has joined. (It is impossible.) The two are married unto death. Only when one of the parties of the covenant dies does the marriage covenant then become abolished. Hence, if the man dies and the woman becomes another man’s, she is not an adulteress. (Ergo, death is identified as the means by which a covenant is abolished.) Rather, “if her husband dies, she is at liberty to be married to whom she wishes, only in the Lord.”7

Just as the woman is under her husband (ὕπανδρος) in marriage as long as her husband lives, and the husband is thus over his wife as her κύριος, the apostle Paul describes how the Law is κύριος of/over a man as long as a man lives. Consequently, the man is “under the Law” as long as the Law lives, so to speak. By analogy, then, the wife is equated to the man under the Law, and the husband is equated to the Law. For, the husband is lord/master/owner (κύριος) of the wife just as the Law is lord/master/owner (κύριος) of the man (who knows the Law, i.e., the Israelite). 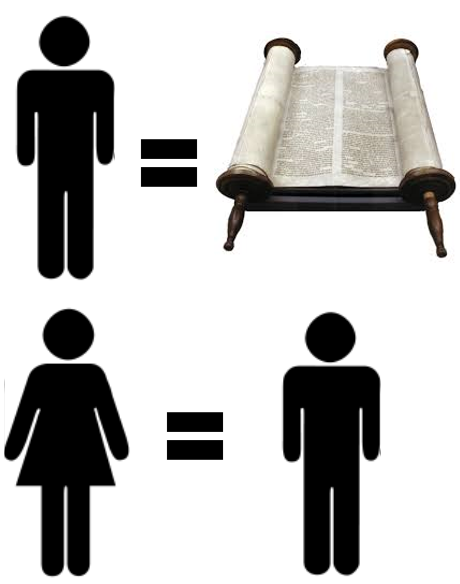 For the Israelite under the Law (bound by covenant), death is necessary to be free from the Law, as the Psalmist wrote, “Free among the dead,”22 and Job wrote that “the servant is free from his master” in death.23 Regarding Psa. 88:5, the rabbis wrote,24

“Free among the dead” — as soon as a man dies, he is made free from the commandments.

Therefore, the Israelite must die. But, if the Israelite dies in his sins, he perishes forever, never having received salvation from his sins. However, God has provided a means for the Israelite to live eternally by believing in Christ and to never bear the eternal punishment for his own sins, for it is written,25

Amen, amen, I say to you, “He who hears my word and believes on Him who sent me, has eternal life and shall not come into condemnation, but he is passed from death unto life.”

This part of Romans is specifically dealing with the issue that the (Christian) Jews had with allowing gentiles into the Church.

The Ten Tribes of Israel were divorced from God

“Thus says the Lord: "Where is your mother's certificate of divorce, with which I sent her away? Or which of my creditors is it to whom I have sold you? Behold, for your iniquities you were sold, and for your transgressions your mother was sent away.” ‭‭Isaiah‬ ‭50:1‬ ‭

“And I saw that for all the adulteries of faithless Israel, I had sent her away and given her a writ of divorce, yet her treacherous sister Judah did not fear; but she went and was a harlot also.” ‭‭JEREMIAH‬ ‭3:8‬ ‭

Judah did not get a certificate of divorce. But first it’s important to note that he married Israel all twelve tribes

““Then I passed by you and saw you, and behold, you were at the time for love; so I spread My skirt over you and covered your nakedness. I also swore to you and entered into a covenant with you so that you became Mine,” declares the Lord GOD.” ‭‭EZEKIEL‬ ‭16:8‬ ‭

Judah and Benjamin and any Levites in their tribes which made up the southern kingdom were not given a certificate of divorce.

The law states clearly that if a certificate of divorce is issued the wife may not return to her first husband.

“then her former husband who sent her away is not allowed to take her again to be his wife, since she has been defiled; for that is an abomination before the LORD, and you shall not bring sin on the land which the LORD your God gives you as an inheritance.” ‭‭DEUTERONOMY‬ ‭24:4‬ ‭

This was the issue the Jews (Judah and Benjamin) were having, namely, if they accepted the gentiles into the church then God would be forced to accept the divorced Tribes of Israel and break His own Law, which God cannot do.

What Apostle Paul is saying is that Jesus the Angel in Mt Sinai is the first husband that went into covenant with the twelve tribes and divorced ten of the twelve.

“This is the one who was in the congregation in the wilderness together with the angel (Jesus) who was speaking to him on Mount Sinai, and who was with our fathers; and he received living oracles to pass on to you.” ‭‭ACTS‬ ‭7:38‬ ‭

But not only that Jesus resurrected and said, pick me as your bridegroom. Let’s enter into a New Covenant but not by bloodlines

On this argument Paul continues the picture and draws further parallels saying that not only did Jesus die the first husband but we the bride have died because we are IN HIM. And therefore we are no longer under the Law, just as Jesus the first husband is no longer bound by the Law preventing Him from entering into covenant with the divorced Israel.

This is a very rich text.

Not the answer you're looking for? Browse other questions tagged greek word-study grammar romans grammatical-historical or ask your own question.

7
What is the correct sentence structure for Romans 12:6?
5
Does Paul believe that God sandbagged the Jews with a law they couldn't keep?
12
What does Romans 10 have to do with Deuteronomy 30?
8
What is the Meaning of 'broken off' and 'cut off' in Romans 11 vv 20 and 22?
8
Is there a difference between "the sin" and "sin" in Romans?
3
In what sense is the verb hated μισέω used in Romans 9:10-13?
1
What is the significance of the different words Paul uses to describe death, dead, and being put to death when writing about sin and the law?
2
Matthew 7:12, Our Savior starts the statement with a therefore, to connect to the previous verses. What is the connection?
7
What is the first husband in Romans 7:1-6?
2
Romans 7:9 ~ Why does Paul say the commandments were supposed to bring life but brought death