History: Per Leviticus 19:27 would the apostles have had side locks? [closed] 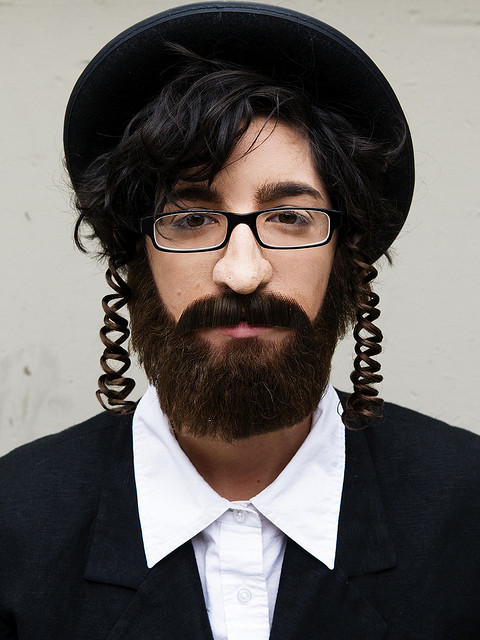 history leviticus second-temple-judaism
Share
Improve this question
edited May 8 '19 at 18:46

The passage we find this commandment in is as follows (my translation):

You shall not eat anything in its blood,*nor do incantations, nor anything arcane.

And you shall not make in your flesh any cutting for the dead, nor mark any writing upon yourselves: I am the Lord.

Translation-wise, I think "round the edges of your head" is too rigid and non-contextual a translation or interpretation. Edges hear seems to refer to the sides, i.e. "around the head."

The whole little pericope seems to have to do with pagan practices (cutting onself for the dead, making markings in their flesh, divining etc.), ones to be avoided by Israelites. A sign for setting them apart, I don't think, is in view at all except in that they are not to do what makes one pagan—which here clearly refers to cultic cuttings and shavings, not keeping your hair and beard trimmed. It seems to have the same thrust as the following (Deuteronomy 14:1-2):

You are the children of the Lord, your God: you shall not lash yourselves or make a baldness between your eyes for the dead. For you are a holy people to the Lord, and the Lord chose you to be His for his own people over all the peoples upon the face of the earth.

The Hassidic practice seems to be a novelty, and is entirely absent from art depicting Jews, by Jews, from ancient times.

The following fresco from the Dura-Europos Synagogue (second century) is representative of ancient Jewish art.

(David is anointed by Saul). 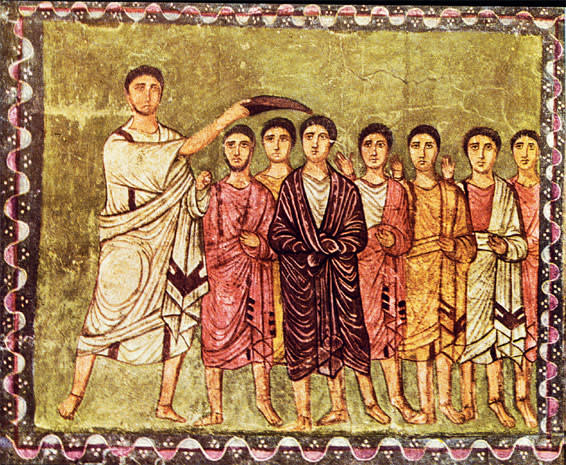 Here, none of the males have long sidelocks, or even beards for that matter (on most of them).

Later, even from art from a the 6th century Synagogue in Gaza, again, we have King David sporting a baby-smooth face, and no sidelocks—or beard: 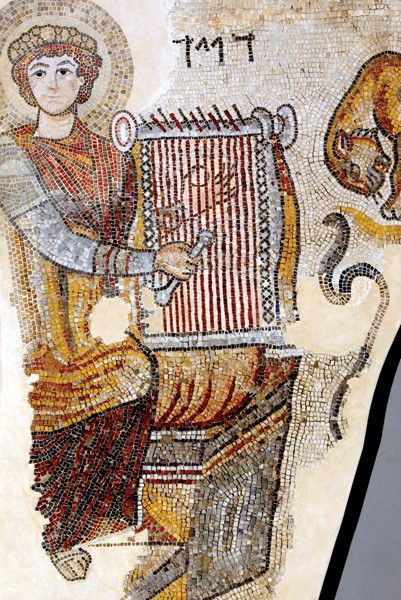 This is inconceivable if this was in any way the ancient and indispensable practice of the Jews. It seems like yet another one of the result of the kind of pedantic surmising discussions found in the Talmud, and for to tire an old trope, a 'tradition of men.'

Not the answer you're looking for? Browse other questions tagged history leviticus second-temple-judaism or ask your own question.

7
Pagan hairstyle forbidden in Leviticus 19, who had it?
7
Is this person's translation of the Hebrew of Leviticus 18:22 accurate?
5
How to understand Leviticus 18:22 and 20:13
5
Is being "cut off from one's people" the cause or effect of sin?
1
According to Leviticus 23:32 is fasting mandatory on the Day of Atonement or not?
7
Are the feast of unleavened bread (Leviticus 23:11) and the feast of first fruits (Leviticus 23:14) mutually exclusive?
2
History: Might Herod Agrippa have prosecuted Christians for being part of an illegal religion?
1
What does it mean not to "mar the corners of thy beard"?
1
Does Leviticus 23 Contradict the Rabbinical Sunset Reckoning of Calendar Days?
3
Why does Matthew 26:17 seem to ignore/contradict the instructions and schedule of Leviticus 23:5-7?