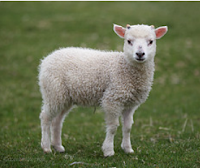 [Dan 7:8 ESV] (8) I considered the horns, and behold, there came up among them another horn, a little one, before which three of the first horns were plucked up by the roots. And behold, in this horn were eyes like the eyes of a man, and a mouth speaking great things.

[Dan 7:11 ESV] (11) "I looked then because of the sound of the great words that the horn was speaking. And as I looked, the beast was killed, and its body destroyed and given over to be burned with fire.

No. It is essential to count the kingdoms that Daniel 7 lists, and to stay with the context. The word "beast" in Daniel 7 is from Strong's Heb. 2432, and is the same meaning as in Rev. 13.

As provided in the question here the beasts of Rev. 13 are metaphors expressed as wild predator animals symbolizing two ruling authorities that persecute and tyrannize the people. The same word "therion" (strong's Gr. 2342) is used for both the sea beast (vs.1,2) and the land beast (vs. 11). The sea beast Rev. was the gentile nation of the Roman empire that surrounded the land beast that had two horns like a lamb.

The sea is the metaphor for the gentile nations that surrounded the pleasant land (Psa. 106:24; Jer. 3:19; Dan. 8:9) of Israel, and the remnant of Judea. This means that these beasts were 4 world powers of the nations outside of Israel.

4 The first was like a lion, and had eagle's wings: I beheld till the wings thereof were plucked, and it was lifted up from the earth, and made stand upon the feet as a man, and a man's heart was given to it." (Dan. 7:4, KJV)

This world power was the first kingdom of Nebuchadnezzar's dream of Dan. 2, and was Babylon. It was at first powerful under Nebuchadnezzar, but became weak under Belshazzar, the last Babylonian king.

"5 And behold another beast, a second, like to a bear, and it raised up itself on one side, and it had three ribs in the mouth of it between the teeth of it: and they said thus unto it, Arise, devour much flesh." (Dan. 7:5, KJV)

The second world power (beast) was the Medo-Persian empire under Cyrus and Darius. It was compared to a bear, though strong it was more lumbering than a lion with one king stronger on one side (Cyrus) than the other king (Darius) and it devoured the first kingdom - Babylon - the three ribs in its mouth.

"6 After this I beheld, and lo another, like a leopard, which had upon the back of it four wings of a fowl; the beast had also four heads; and dominion was given to it." (Dan. 7:6, KJV)

This third world power was weaker than the bear, but still fast with wings. It was the brass kingdom of Dan. 2:39. The four heads were its rulers with dominion in that kingdom and it conquered the previous world power. This was Alexander the Great and his four generals: Cassander, Lysimachus, Seleucid, and Ptolemy I. (1)

"After this I saw in the night visions, and behold a fourth beast, dreadful and terrible, and strong exceedingly; and it had great iron teeth: it devoured and brake in pieces, and stamped the residue with the feet of it: and it was diverse from all the beasts that were before it; and it had ten horns." (KJV)

This 4th kingdom stamped out all remnants of the previous 3 world powers and it had 10 horns, that is 10 kings. This is the same beast kingdom that rose from the sea (gentile nations) of Rev. 13:1-2. This was the Roman empire the enveloped all the other world powers that had come before it.

As the first kingdom was identified as Babylon, then we have to count from Babylon to identify the 4th world power. This prophesy does not go beyond that 4th kingdom from Babylon, and it does not go beyond the "end" of Daniel 9:24 - 12:13 when the power of the "holy people" - the Jews - were scattered. Babylon was the beginning time frame, and the destruction of Jerusalem is the ending time frame.

"And the beast which I saw was like unto a leopard, and his feet were as the feet of a bear, and his mouth as the mouth of a lion: and the dragon gave him his power, and his seat, and great authority." (Rev. 13:2, KJV)

It had the essence, nature of the leopard beast of Alexander's kingdom, the bear beast of Cyrus and Darius, and the lion beast of Babylon. It was the amalgamation of all the remnants of the previous 3 kingdoms that made it both strong and broken (Dan. 2:41-42), mixed with iron and clay which would not cleave and bind to one another.

The 10 horns were of this 4th kingdom (Dan. 7:7, Rev. 13:1). They were 10 kings belonging to this 4th kingdom, therefore they were 10 kings of the Roman empire up to the point of Christ's second appearance (Heb. 9:28) in judgment of Jerusalem: Julius Caesar, Augustus, Tiberius, Caligula, Claudius, Nero, Galba, Otho, Vitellius, and then Vespasian. (2)

The subject of Revelation was the destruction of Jerusalem, the end of the desolations of Jerusalem of which Gabriel had told Daniel (Dan. 9 - 12). That puts the end of the time frame with the siege and destruction in AD 70. Vespasian rose to power after the three previous "horns" or kings who had each vied for power over Rome once Nero killed himself.

At the time of the vision and writing of Revelation five of these kings had fallen, and "one is" (Rev. 17:10) The sixth king was ruling at the time of this book, Nero. Nero was the last of the Julian line, but both Galba (the 7th) and Otho (8th) appealed to Nero's nature and habits in an attempt to garner support from the people. (3) Thus the sixth king, the one that "now is" was revived through both the 7th and 8th kings.

The three kings that preceded Vespasian were not of the Julian line, and Vespasian's reign began the Flavian dynasty. This was the Year of Four Emperors (4) during which Rome nearly fell, but Vespasian pulled it back from the brink of the civil wars caused by Galba, Otho, and Vitellius, and took control. Thus the beast ascended out of the bottomless pit (Rev. 17:8) into which it had fallen with the death of Nero.

Therefore, the little horn (king) that was different from the others (Flavian line) and subdued three kings before it (Dan. 7:24 - Galba, Otho, and Vitellius) was Vespasian. Describing this king as a little horn spoke of the strength and power of that king. It did not mean the beast nation was small, only that the power of this horn was small when compared to the power of the previous kings. Vespasian's power had to be assembled from the support of the armies he commanded, and which he gathered together as he marched to Rome in AD 69 because he was not of the Julian line. His power was not of birth line, but popular support.

But, the land beast of Rev 13:11 was not of the power of the ten kings of the sea beast. It was of the power held over the land... the "earth" of Jerusalem and Judea, and it was the persecuting Sanhedrin... the Pharisees and Sadduccees... the two horns of the land beast. Speaking as a dragon, that is a serpent was the picture of a lying, deceiving ruling power trying to turn the righteous away from God (Gen. 3:1-5). The Pharisees and Sadduccees were trying to impose the Mosaic Law upon those newly immersed (baptized) saints who were in Christ and turn them back from their salvation.

The little horn of Dan. 7 was - in my view- Vespasian. It was certainly of and belonged to the 4th kingdom, the 4th beast power which was Rome during the first century AD. It was not the same as the land beast of Rev. 13:11.

3) Frequent Mistakes - Part I: The Wounded Head at ShreddingTheVeil

There are far more parallels between the beast from the sea (Rev 13:1-8) and Dan 7's four beasts, specifically:

Thus, there is a case for see a parallel between the beasts of Dan 7 (especially the fourth beast) and sea beast of Rev 13.

However, the parallels quoted Rev 13:11, vs Dan 7:8, 11) are a consequence of the primary function of the land beast - it is to give glory to the sea beast by speaking like a dragon and deceiving the inhabitants of the earth. Thus, the character of the little horn of Dan 7 and the land beast of Rev 13 are quite different.

The word used to describe the land beast is ἀρνίον (arnion) which occurs 30 times in the NT as follows:

The links that do exist are because the land beast wants to support the sea beast.

Not the answer you're looking for? Browse other questions tagged revelation daniel symbolism nt-use-of-hebrew-bible or ask your own question.

1
In Revelation 13:11 why do English translations always render θηρίον as “beast”?

9
In the Apocalypse, what is the significance of the phrase «ὁ ὢν καὶ ὁ ἦν καὶ ὁ ἐρχόμενος»?
3
Tetragrammaton originally יהיה (yihayah) (3PersMascSing 'exist, be') and subsequently the nominal form (יהוה) (the Being)?
2
What do the three “plucked horns” of Daniel 3:8 represent?
2
Why does the Greek use different words for “like” in Revelation 13:11?
0
In Revelation 1:7 is it “all the nations of the earth” that wail or “all of the tribes of the Land”?
2
In Revelation 13:11 why does the “lambkin” have horns?
1
In Revelation 13:11 why do English translations always render θηρίον as “beast”?
7
In Revelation 6:6 what is meant by "Do not damage the oil and the wine”?
4
Is Luke 21:24 an allusion to Daniel 7:25?