In Hebrews 1:3 is "by himself" original?

I came across an interesting NT textual criticism site that argues that the words "by himself" are original, despite being omitted in modern English Bibles:

Heb. 1:3 In Hebrews 1:3, most modern English versions (RV, RSV, NIV, NASB, NRSV, ESV, HCSB, NET, NLT) omit the words 'by himself' in the sentence, 'when he had by himself purged our sins, sat down at the right hand of the Majesty on high'. As we will see, this decision to omit is quite puzzling, in view of the evidence.

The textual evidence for the inclusion of these words is quite strong: the oldest manuscript (P46) contains the words, as well as the vast majority of manuscripts from the Byzantine and Western text-types, and most of the versions contain the words (the Syriac, the majority of Old Latin manuscripts, Ethiopic and Slavonic - even the Coptic versions break ranks with the Alexandrian manuscripts and include these words).

About 14 manuscripts omit the words, including Aleph, A and B. The 14 manuscripts that omit mostly come from the one text-type (Alexandrian). The Latin Vulgate and Armenian versions also omit.

When we evaluate this evidence according to our PANEL method, the evidence presents as follows:

Propinquity: the longer reading is preferable, with wider attestation from manuscripts and versions from North, West, East (the Syriac versions) and South, while the shorter reading has support from the Alexandrian text-type and minor versions.

Antiquity: the longer reading is preferable with P46, the oldest manuscript, reading these words

Numbers: the longer reading is preferable, with the vast majority of manuscripts containing the words

Explanatory: the longer reading is preferable, as scribes tended to omit words rather than add them. In addition, the omission is easily explainable on the basis of homoeteleuton: a scribe jumped from the letters OU to OU in DUNAMEWSAUTOUDIAUTOU. Amazingly, Metzger does not even mention the possibility of parablepsis in his textual commentary.

This only leaves the issue of Logic. The reading 'by himself' seems somewhat unnecessary and superfluous. What does it add to the verse? Why might the author have used these words?

The word 'himself' is used a number of times in the letter to the Hebrews, particularly in the chapters dealing with Christ's sacrifice:

7:27 - 'this he [Christ] did [i.e. offered a sacrifice] once for all when he offered up himself' 9:7 - [the Aaronic High Priest went into the Holy Place yearly] 'not without blood, which he offered for himself and the peoples' sins' 9:14 - 'Christ, who through the eternal Spirit offered himself without spot to God' 9:25 - 'not that he should offer himself often, as the High Priest enters into the Holy Place yearly with the blood of another' 9:26 - 'now, once at the end of the ages, he has appeared to put away sin by the sacrifice of himself'. (Actually, this verse does not use the reflexive pronoun 'himself', and literally it should read 'his sacrifice', but I have included this reference because (a) it is my favourite verse in the book of Hebrews, and (b) because most modern English translations use the reflexive pronoun either because of tradition, or because the context of the previous verses contrasts Christ's sacrifice of himself with the sacrifice of the Levitical priests of the blood of another). Here we have the message of middle chapters of the book of Hebrews: Christ is not only the priest who offers a sacrifice to God (chapters 5-7), but he is also the sacrifice itself (chapters 8-10). He did not offer a sacrifice for himself, not did he offer the sacrifice of another; he offered himself.

When we look back at Hebrews 1:1-3, we are forced to add yet another fact: in view of the greatness of who the Son of God is (Creator and Sustainer of all things, perfect and complete expression of God's person), it is not only amazing that he himself should be the sacrifice for sins, but further, as the Son of God, he was perfectly able, sufficient and willing to make purification for sins - all by himself. The focus here in Hebrews 1:3 rests upon who he is, the work he has done, and the majestic enthronement he has been given as a result of all this. The fact that he himself did all this - by himself - gives him the unique privilege to be seated at the right hand of the majesty in the heavens.

The emphasis therefore upon 'himself' seems to suit what the writer is trying to convey here: the uniqueness of Jesus the Son of God.

In conclusion, virtually every piece of evidence points in the direction of the retention of the words. There seems no good reason for the omission whatever. What is most puzzling is that most of the above-mentioned English versions that omit the words do not even mention the alternative reading 'by himself' in their footnotes.

He seems to make a strong case; should we be convinced?

If so, why have others gone the other way?

According to the UBS5 and NA28 data:

For what it is worth, the UNS/NA committee has given its reasoning as recorded in "A Textual Commentary on the GNT" by Bruce M Metzger, which I have reproduced below. 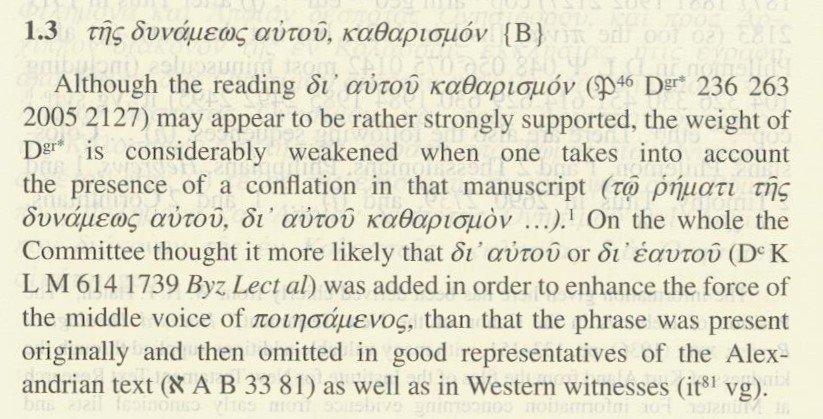 I am personally unpersuaded by the OP's theological reasons. Such matters must be decided on the basis of textual analysis alone, otherwise we start deciding what is Scripture or otherwise on the basis of our theology - a very dangerous position.

On the balance of probabilities, I think the UBS text is likely correct. In any case, whether "by himself" is included or not, makes little difference to the final meaning.

Not the answer you're looking for? Browse other questions tagged textual-criticism hebrews or ask your own question.

10
Coherence-Based Genealogical Method vs. Local Text-Types Theory
9
In Hebrews 7:27, why does it say that the High Priest had a need to offer sacrifices “daily” («καθ᾽ ἡμέραν»), etc.?
2
What factors bear on the authenticity of Χριστοῦ in 1 John 1:7?
1
In Hebrews 9:26 what does it mean that Christ "did away with the sin"?
4
Should we take up our cross daily or not?
6
How do we understand Hebrews 10:2 in light of our ongoing consciousness of sin?
1
(1 John 3:5-10 & 1 John 5:18)Alexandrian manuscripts relatively practical, level-headed while Byzantine manuscripts are rhetorical hyperbole-like
1
Does Hebrews 10:4 contradict Jesus regarding Sacrificial Atonement?
4
Does Hebrews 9:28 imply that only those who eagerly await the second coming of Christ will be saved?