Why did the Israelites lose the battles to the Benjamites after receiving the green light from God?

In Judges 20:18,23. The men of Israel enquired and sought counsel from the Lord to fight with the Benjamites because of their wickedness towards the concubine of the Levite(Judges 19:25-26,20:4). The Lord told them to go, yet they were destroyed twice; first time, the Benjamite destroyed 22,000 men(Judges 20:21), and second times, 18,000 men were destroyed (Judges 20:25). Even the 3rd times after enquiring from the Lord with fasting and offerings! Yet up to 30 men were destroyed, before the Lord intervened and gave them victory. Now,why did the Lord asked them to go and yet,they were smitten? And what does this story teach us?

After reading commentaries for Judges 20:21, most notably Benson's commentary, I came to this theory:

The children of Israel assumed that God wanted them to go up and fight against their brothers the Benjamites by asking "Which of us shall go up first to the battle ...". God then told them to "go up". He did not tell them that He would deliver them into their hands but only to go up. (Judges 20:18) The children of Israel go on to lose the first battle.

Without proper respect and adoration for the full council of God, especially on such a weighty matter as warring against their own brethren, the children of Israel inquire again, this time asking if they should go up, the Lord tells them again "go up". Again they assume something of God without getting his full council on the matter. God says go up but nothing about delivering the Benjamites in their hands. They lose this battle as well.

David had respect unto God and did not assume anything. He not only asked if he should go up, but also if God would deliver them into his hands.

After losing the second battle, the children of Israel finally pay proper respect unto God with fastings, prayers and sacrifices. (Judges 20:26) They again inquire of God and this time, after giving proper respect unto God, God tells them to not only "go up" but that He will deliver the Benjamites into their hands. Which he did.

Was God teaching the children of Israel they should depend wholly on His council for such great matters, not assuming or rushing into things? And that God deserves adoration, glory and respect when He is approached and inquired of?

This story starts back in chapter 17 with Micah. I am not going to dissect this very large portion of passages but I’ll try to draw on some key points linked to the passage in question, namely the battles, especially the failures to succeed in battle when the Word of the Lord was consulted and instructions were followed.

I appreciate the user gffg mentioning the Council of the Lord because that is paramount to understanding what happened in the heavenly council that led to the events unfolding on earth as they did. I would link to one of my responses for information on my take of what happens in the council of the Lord and why.What does "fear of the Lord" in 2 Chronicles 14:13-15 mean?

“Now there was a young man of Bethlehem in Judah, of the family of Judah, who was a Levite, and he sojourned there. And the man departed from the town of Bethlehem in Judah to sojourn where he could find a place. And as he journeyed, he came to the hill country of Ephraim to the house of Micah.” ‭‭Judges‬ ‭17:7-8‬ ‭

It would help to see the geography of the tribes 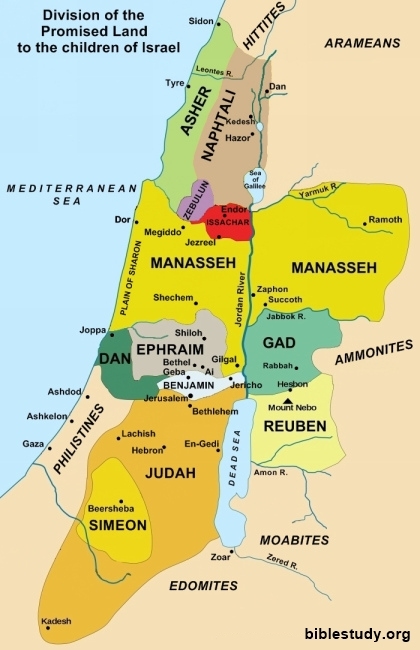 “In those days, when there was no king in Israel, a certain Levite was sojourning in the remote parts of the hill country of Ephraim, who took to himself a concubine from Bethlehem in Judah.” ‭‭Judges‬ ‭19:1‬

I’m not saying it’s the same Levite, I’ll point out these two Levites committed or perpetuated as leaders in Israel two sins against the Lord.

In the first instance the first Levite caused a whole tribe to live in idolatry and by endorsing it, he was essentially giving a mark of approval from God because the Levites bore the name of God, they represented the Law to the rest of the nation.

“And the people of Dan set up the carved image for themselves, and Jonathan the son of Gershom, son of Moses, and his sons were priests to the tribe of the Danites until the day of the captivity of the land. So they set up Micah's carved image that he made, as long as the house of God was at Shiloh.” ‭‭Judges‬ ‭18:30-31‬ ‭

“And his concubine was unfaithful (ותזנה or she fornicated) to him, and she went away from him to her father's house at Bethlehem in Judah, and was there some four months.” ‭‭Judges‬ ‭19:2‬ ‭

Why did God send Judah first, alone and allow their defeat?

This concubine was back in her father’s house in Judah for four months fornicating or prostituting herself. Judah’s men one or more were complicit in this fornication. And yet they did not observe the law that says

“"Do not profane your daughter by making her a prostitute, lest the land fall into prostitution and the land become full of depravity.” ‭‭Leviticus‬ ‭19:29‬

On the one hand all those gathered understood that evil had to be purged out of Israel for what the Benjamites has done, but they were with their own guilt, judging the straw when they had a log in their own eye. They had a whole tribe worshiping an idol and Judah was perpetuating prostitution.

“Now therefore give up the men, the worthless fellows in Gibeah, that we may put them to death and purge evil from Israel." But the Benjaminites would not listen to the voice of their brothers, the people of Israel.” ‭‭Judges‬ ‭20:13‬

And God says Judah should go first because they were complicit in the young concubine’s death. It was God who specifically instructs Judah to go alone but instead of checking themselves they fell under judgment. Either you judge yourself or you get judged.

“"Whoever sacrifices to any god, other than the Lord alone, shall be devoted to destruction.” ‭‭Exodus‬ ‭22:20‬ ‭

The additional 30 men that died on the third day I’m not going to go into details about not about the Benjamites for their practice of sodomy that led to the death of the female prostitution.

I hope this answers some of your many question you had on this passage.

Not the answer you're looking for? Browse other questions tagged history israel ten-commandments or ask your own question.

12
How should the story of David's concubines be read?
16
In Deuteronomy 4:13 why were the Ten Commandments written on two tablets?
9
Why did the Samaritans worship God in Mount Gerissim rather than Jerusalem?
14
Why is the tribe of Dan missing from Revelation 7:5-8?
1
What did people do with children in biblical times when people gathered as a congregation?
7
Why did God give instructions about the arrangement of the Israelite tribal camps?
3
Did Jesus recover the lost tribes of Israel?
4
By the end of Judges (Judges 21:25) who comprised the Israelites?
0
Human sacrifice wins victory for losing side 2Kings 3
5
Why did God hate Esau from the womb when he had done no evil?