Why are different words for "month" used to when identifying Ziv as the second month, Bul as the eighth month, and Ethanim as the seventh month?

The construction of the Temple began in the month of Ziv, which is identified as the second month:

In the four hundred and eightieth year after the people of Israel came out of the land of Egypt, in the fourth year of Solomon's reign over Israel, in the month (בְּחֹ֣דֶשׁ) of Ziv, which is the second month (הַחֹ֣דֶשׁ), he began to build the house of the LORD. (1 Kings 6:1) [ESV]

As the name Ziv זִ֗ו is only found here and v. 37. It makes sense it should also be identified by its number. "Month" for both the name and number is חֹדֶשׁ.

Two other events are recorded as occurring in a named month:

And in the eleventh year, in the month (בְּיֶ֣רַח) of Bul, which is the eighth month (הַחֹ֣דֶשׁ), the house was finished in all its parts, and according to all its specifications. He was seven years in building it. (1 Kings 6:38)

And all the men of Israel assembled to King Solomon at the feast in the month (בְּיֶ֥רַח) Ethanim, which is the seventh month (הַחֹ֥דֶשׁ). (1 Kings 8:2)

As with Ziv, Bul בּוּל, and Ethanim איתנים, are also identified with their number. However, unlike Ziv, the named month is called יֶרַח while the numbered month remains חֹדֶשׁ.

In the fourth year the foundation of the house of the LORD was laid, in the month (בְּיֶ֖רַח) of Ziv.
(1 Kings 6:37)

Now, like Bul and Ethanim, Ziv is called a יֶרַח month.

Why are the different words for month used? Why is the "month" of Ziv different from the "months" of Bul and Ethanim when identified by number?

In 1 Kings 6:38, I would translate the phrase as follows:

The two words translated (correctly) "month" are shown below. Note the difference - one counts the number of new moons from the beginning of the year and the other is a period of time or "lunation" lasting from one new moon to the next. 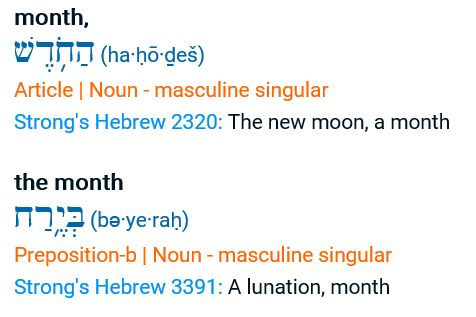 1 Kings 8:2 shows the same pattern and uses the same words.

Not the answer you're looking for? Browse other questions tagged hebrew 1-kings or ask your own question.