In Job chapter 8, Bildad the Shuhite, in an attempt to show that Job was a hypocrite, makes an appeal to ancient wisdom (verses 8-10).

For enquire, I pray thee, of the former age, and prepare thyself to the search of their fathers: (For we are but of yesterday, and know nothing, because our days upon earth are a shadow) Shall not they teach thee, and tell thee, and utter words out of their heart?

He then seems to quote an ancient proverb about papyrus (verses 11-19).

Can the rush grow up without mire? can the flag grow without water? Whilst it is yet in his greenness, and not cut down, it withereth before any other herb. So are the paths of all that forget God; and the hypocrite's hope shall perish: Whose hope shall be cut off, and whose trust shall be a spider's web. He shall lean upon his house, but it shall not stand: he shall hold it fast, but it shall not endure. He is green before the sun, and his branch shooteth forth in his garden. His roots are wrapped about the heap, and seeth the place of stones. If he destroy him from his place, then it shall deny him, saying, I have not seen thee. Behold, this is the joy of his way, and out of the earth shall others grow.

Is this a quote from some earlier text? If it is, which text is it? We now have recovered so much from ancient Egyptian, Babylonian, and Sumerian mythologies, that it seems reasonable to me that someone at some point in time has found what he is quoting.

This is not a quote from an ancient text. Bildad is just saying that ancient wisdom agrees with him that the wicked do not escape judgement. There are indeed a few quotes from ancient books in the bible but they are usually introduced (e.g., Num. 21:27) and sometimes even given a source (ibid verse 14), Bildad's words however do not fall neatly into this category, so there is no reason to assume that it a quote.

If you mean 'borrowing of language', i.e., that the author may have copied Bildad's parables from an older source, that is not the case either. In fact, even biblical critical scholarship which usually looks for origins or possible influences of ANE literature on certain biblical compositions almost never find direct parallels between them, it is rather common motifs, themes; shared myths, legends, legendary figures, etc. that they are able to identify. There are a few famous direct literary parallels between biblical and ANE texts, e.g., Proverbs 22:17-24:22, which draws on an Egyptian wisdom text (the Instruction of Amenemope), and Psalm 104 which was directly influenced from the Great Hymn to the Aten (you can see here for more), but these are exceptions rather than the rule! Direct borrowing of language and parallels is more common between the biblical prophetic books themselves, but it is rare to find a direct literary parallel, never mind a quote, from an ancient ANE text in the OT.

In any case, I'm not aware of any direct borrowing of language in the book of Job. Scholars, however, do agree that the book of Job was influenced by Ancient Wisdom texts and a lot of its motifs are drawn from ancient Egyptian and Mesopotamian texts. In chapter 8 the only foreign influence I was able to find is verses 8-10 which contends that wisdom from the ancients is significant. This is a common theme in ancient Sumerian proverbs and the wisdom literature from Mesopotamia. However, no direct literary parallels are to be found in this chapter, and, needless to say, no quotes from ancient texts.

Many might be surprised to learn that Job doesn't appear to be an Israeli so the reference to "fathers" here would not likely be the "patriarchs". IE: HE IS NOT CITING ANY ANCIENT WISDOM.

The context suggests that Bildad is using a complex structure to say "Job is an idiot". Basically he says "You should ask your Dad because you don't have the sense of a box of rocks". In other words he's being rhetorical in suggesting that he ask the previous generation and does not want him or expect him to actually do it.

The reference to "papyrus" is not to the paper product made from the plant or writings thereon. He's pointing out that all that stands between the papyrus plant and death is the hydration from the plant in which it grows (papyrus is a grass and like rice, which is also a grass, grows in shallow water and wet mud). 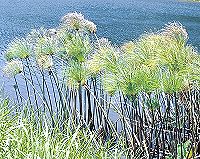 Job 8:8-9, 11-13 CSB - 8 For ask the previous generation, and pay attention to what their fathers discovered, 9 since we were born only yesterday and know nothing. Our days on earth are but a shadow. ... 11 Does papyrus grow where there is no marsh? Do reeds flourish without water? 12 While still uncut shoots, they would dry up quicker than any other plant. 13 Such is the destiny of all who forget God; the hope of the godless will perish.

1Pe 1:23-25 KJV - 23 Being born again, not of corruptible seed, but of incorruptible, by the word of God, which liveth and abideth for ever. 24 For all flesh is as grass, and all the glory of man as the flower of grass. The grass withereth, and the flower thereof falleth away: 25 But the word of the Lord endureth for ever. And this is the word which by the gospel is preached unto you.

Jas 1:9-11 KJV - 9 Let the brother of low degree rejoice in that he is exalted: 10 But the rich, in that he is made low: because as the flower of the grass he shall pass away. 11 For the sun is no sooner risen with a burning heat, but it withereth the grass, and the flower thereof falleth, and the grace of the fashion of it perisheth: so also shall the rich man fade away in his ways.

Not the answer you're looking for? Browse other questions tagged job grammatical-historical or ask your own question.