I'm sure many of you are familiar with Hebrews 10:20's "new and living way". I never questioned what it said in Greek, whether the "new" was the "kainos kind" or the "neo kind"; qualitatively new or a newbie kind of new. I was shocked to discover it was neither!

The kind of new is G4372 prosphatos! I think it means that which is characteristic of a fresh kill, or new slaughter as if the blood is still warm.

It reminds me of Rev 5:6, picturing Jesus's present way of governing.

I'm wondering if you think it has been correctly translated in the popular, mainstream versions?

I see a missed opportunity here to extol the nature of the Lamb of God and the freshness of His blood.

The Greek sounds like that heart-attitude mindset Jesus has in Php 2:5-8 to lay His life down, up from which God exalts Him high above (Php 2:9-11).

In other words, whereas παλαιός is used to speak of "in the past" or "long ago" while πρόσφατος is use to refer to what is "recent" or "fresh". It is also used for "not previously existing". Context will indicate which is intended.

The etymology, as usual, is interesting but does not dictate how people actually use the word. 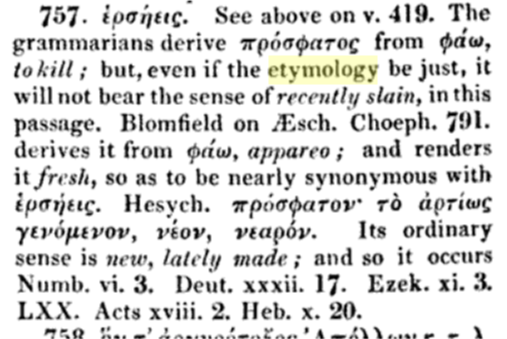 The "way" is the [unobstructed] path into the most holy place aka "Holy of Holies". In the temple it was necessary to traverse the outer court in order for the priests to annually enter and secure forgiveness of sins for the people (on Yom Kippur). Only the priests could enter, once per year with blood.

But Jesus' flesh, like the curtain that hid the holiest place was torn (top to bottom, by God), the temple (with its obstructing outer court) was destroyed (~70ad) and the way of access was open. The Hebrew enters boldly at any time, without blood because under the new covenant forgiveness has been secured once for all time. If the blood of bulls and goats worked for the priests, how much more the blood of the covenant? This was all a "recent" development. In fact, when Hebrews was written, the old covenant had not yet "passed away":

1Co 7:31 NKJV - 31 and those who use this world as not misusing it. For the form of this world [IE: the Jewish theocracy] is passing away. 2Co 3:7, 11, 13 NKJV - 7 But if the ministry of death, written and engraved on stones, was glorious, so that the children of Israel could not look steadily at the face of Moses because of the glory of his countenance, which glory was passing away, ... 11 For if what is passing away was glorious, what remains is much more glorious. ... 13 unlike Moses, who put a veil over his face so that the children of Israel could not look steadily at the end of what was passing away. 1Jo 2:8, 17 NKJV - 8 Again, a new commandment I write to you, which thing is true in Him and in you, because the darkness is passing away, and the true light is already shining. ... 17 And the world is passing away, and the lust of it; but he who does the will of God abides forever. Heb 10:37 KJV - 37 For yet a little while, and he that shall come will come, and will not tarry. Heb 8:10-12 KJV - 10 For this is the covenant that I will make with the house of Israel after those days, saith the Lord; I will put my laws into their mind, and write them in their hearts: and I will be to them a God, and they shall be to me a people: 11 And they shall not teach every man his neighbour, and every man his brother, saying, Know the Lord: for all shall know me, from the least to the greatest. 12 For I will be merciful to their unrighteousness, and their sins and their iniquities will I remember no more. Rom 16:20 KJV - 20 And the God of peace shall bruise Satan under your feet shortly. The grace of our Lord Jesus Christ be with you. Amen.

"By a new and living way which He inaugurated for us through the veil, that is, His flesh."

A New Way of Life

Christianity at its infancy was known as "The Way", which was also referred to as "the way to God", "the way of the truth"(Acts 18:25,26. 2Peter 2:2). The teachings of Christ constituted the Word of God to all true worshipers to follow, and for those that embraced it, was certainly a new way of life for them.

One such person that experienced sweeping changes in his life, from the old way to the New Way was Paul himself, by his own admission, "I was a foremost violent opponent of the "Way"

1 "Now Saul, still breathing threats and murder against the disciples of the Lord, went to the high priest, 2 and asked for letters from him to the synagogues at Damascus, so that if he found any belonging to the Way, both men and women, he might bring them bound to Jerusalem."

13 "Even though I was formerly a blasphemer and a persecutor and a violent aggressor. Yet I was shown mercy because I acted ignorantly in unbelief, 14 and the grace of our Lord was more than abundant, with the faith and love which are found in Christ Jesus. 15 It is a trustworthy statement, deserving full acceptance, that Christ Jesus came into the world to save sinners, among whom I am foremost of all."

TRAUMATIC CHANGES IN ATTITUDE, IN EPHESUS.

Ephesus was a pagan city and many practiced ,magic, spiritism and the likes, for those that embraced the "Way" made traumatic changes in their attitude and way of life. We read:

18" Many also of those who had believed kept coming, confessing and disclosing their practices."

19 "And many of those who practiced magic brought their books together and began burning them in the sight of everyone; and they counted up the price of them and found it [a]fifty thousand pieces of silver."

SUCH WERE SOME OF YOU, IDOLATERS, ADULTERERS IN THE WICKED CITY OF CORINTH.

From the pagan and immoral way of living,for all those converted to Christianity in Corinth, meant a radical change in morals and attitudes ,Paul wrote to the Corinthians,"such were some of you."

9 "Or do you not know that the unrighteous will not inherit the kingdom of God? Do not be deceived; neither fornicators, nor idolaters, nor adulterers, nor effeminate, nor homosexuals."

10 "Nor thieves, nor the covetous, nor drunkards, nor revilers, nor swindlers, will inherit the kingdom of God."

For those that accepted Christianity in the first century, we note that they made drastic changes to their way of life, today it is no different. We have to change our attitude towards our neighbors, friends , workmates, racism, our family relationships, and our way of thinking ,in fact every aspect of our lives is affected when we embrace the "New Way." Jesus said" Do to others as you would have them do to you."( Luke 6:31)

Paul warned Christians not to allow themselves to conform to pressures and the ways of the world ,but to strive to know the will of God so that we may worship God, in a way that is acceptable to him.(Romans 12:2) This means diligent reading of the scriptures.

20" By a new and living way which He inaugurated for us through the veil, that is, His flesh."

Jesus Christ was the first to ascent from earth to heaven 40 days after his resurrection, the event was witnessed only by his 11 faithfully apostles.The scriptures say.

Inauguration: A New and Living Way.

9 "And after He had said these things, He was lifted up while they were looking on, and a cloud received Him out of their sight. 10 And as they were gazing intently into [a]the sky while He was going, behold, two men in white clothing stood beside them. "

11 "They also said, “Men of Galilee, why do you stand looking into [b]the sky? This Jesus, who has been taken up from you into heaven, will come in just the same way as you have watched Him go into heaven.”

He ascended to heaven's in God's presence, to present his ransom sacrifice, thus openning the way for his spirit anointed followers to follow. Jesus the firstfruits of those who have fallen asleep.

20 "But the fact is that Christ (the Messiah) has been raised from the dead, and He became the firstfruits of those who have fallen asleep [in death]."

24 "For Christ (the Messiah) has not entered into a sanctuary made with [human] hands, only a copy and pattern and type of the true one, but [He has entered] into heaven itself, now to appear in the [very] presence of God on our behalf."

Jesus reassures his faithful disciples (anointed followers) that he is going to heaven to prepare a place for them.

19 "This hope we have as an anchor of the soul, a hope both sure and steadfast and one which enters within the veil, 20 where Jesus has entered as a forerunner for us, having become a high priest forever according to the order of Melchizedek.

A New and Living Way.

19 "Therefore, brethren, since we have confidence to enter the holy place by the blood of Jesus, 20 by a new and living way which He inaugurated for us through the veil, that is, His flesh."

Paul wrote that flesh and blood cannot inherit the kingdom of God, (1 Cor. 15:50) so those resurrected to heaven must also bear the image of the heavenly one. (1Cor.15:49)

Not the answer you're looking for? Browse other questions tagged translation-philosophy hebrews or ask your own question.