“From Mount Horeb” (Exodus 33:6), how should we understand the preposition “from” in context?

So the Israelites stripped off their ornaments at Mount Horeb. (NIV)

The problem with the NIV's translation is that the wrong Hebrew preposition is used here. Instead of the expected letter בְּ which means at or by, we find the prefix מֵ which stand for מִן meaning from. So a literal translation would render something like,

So the Israelites stripped off their ornaments from Mount Horeb

This is problematic, since there only two possible exegetical meanings here:

The first one is not very convincing, since nowhere do we find that the Israelites got any special ornaments at Horeb. And the second one suffers from not being very loyal to the original text.

My questions are, how do we interpret the text in a satisfying way while still remaining loyal to the text. Second, is there another instance in the bible where מֵ and בְּ are used interchangeably so as to justify the interpretation of the NIV?

First of all, the מ prefix present in the Hebrew properly means "from." It is worth noting that the LXX and Vulgate stay true to the Hebrew by using ἀπό (away from) and a (away from) respectively in this verse.

For the sake of those who may be unfamiliar with this passage, I will briefly summarize its context. In the preceding chapter, the Israelites (being camped at Mount Horeb) make a golden calf and worship it. In this chapter, God essentially tells Moses to go chastise them for this sin. They are called a stiff-necked people, are almost threatened with destruction, and are commanded to take off their ornaments as a sort of penitential gesture to appease the wrath of Almighty God. (Comparable to wearing sackcloth, or rending one's garments, or fasting.) (c.f. Exodus 33:4-6)

My first theory (posted as an answer on 1/29/2019) was that the מ prefix is used to indicate the origin of the Israelites, and that the verse should be rendered, "The Israelites-from-Horeb stipped off their ornaments." But as OP pointed out, this theory is not very convincing if they were still at Horeb.

Another theory is that the Israelites went some distance away from Mount Horeb, and then stripped off their ornaments in this new location. This is the interpretation given by Gill's Exposition, which I will quote below.

by the Mount Horeb; before their departure from thence, and where they had been guilty of the idolatry: the words may be literally rendered, "from Mount Horeb" (u); and Jonathan understands the preceding clause of something they put off which they received from thence; but the meaning is, that they went to some distance from Mount Horeb, and there stripped themselves to show their greater humiliation, and the sense they had of their unworthiness of being near to the Lord, or enjoying his presence.

The new location need not have been very far away from Mount Horeb, for even moving a small distance away would have carried the same symbolism, namely that the people of Israel have separated themselves from God (symbolized by Mount Horeb, the "mountain of God") through their sin of worshipping the golden calf.

Yet another theory is that the Israelites, while still remaining at Mount Horeb, cast away their ornaments in a direction away from the mountain. This interpretation would be fitting because of the symbolism. Recall that the golden calf was made from golden earrings. The Israelites sinned in the preceding chapter when they allowed golden earrings (ornaments!) to become a "barrier" between themselves and God. By choosing to remain at Mount Horeb and cast away their ornaments behind their backs (away from the mountain), the Israelites would have been symbolically removing a "barrier" which previously separated them from God. 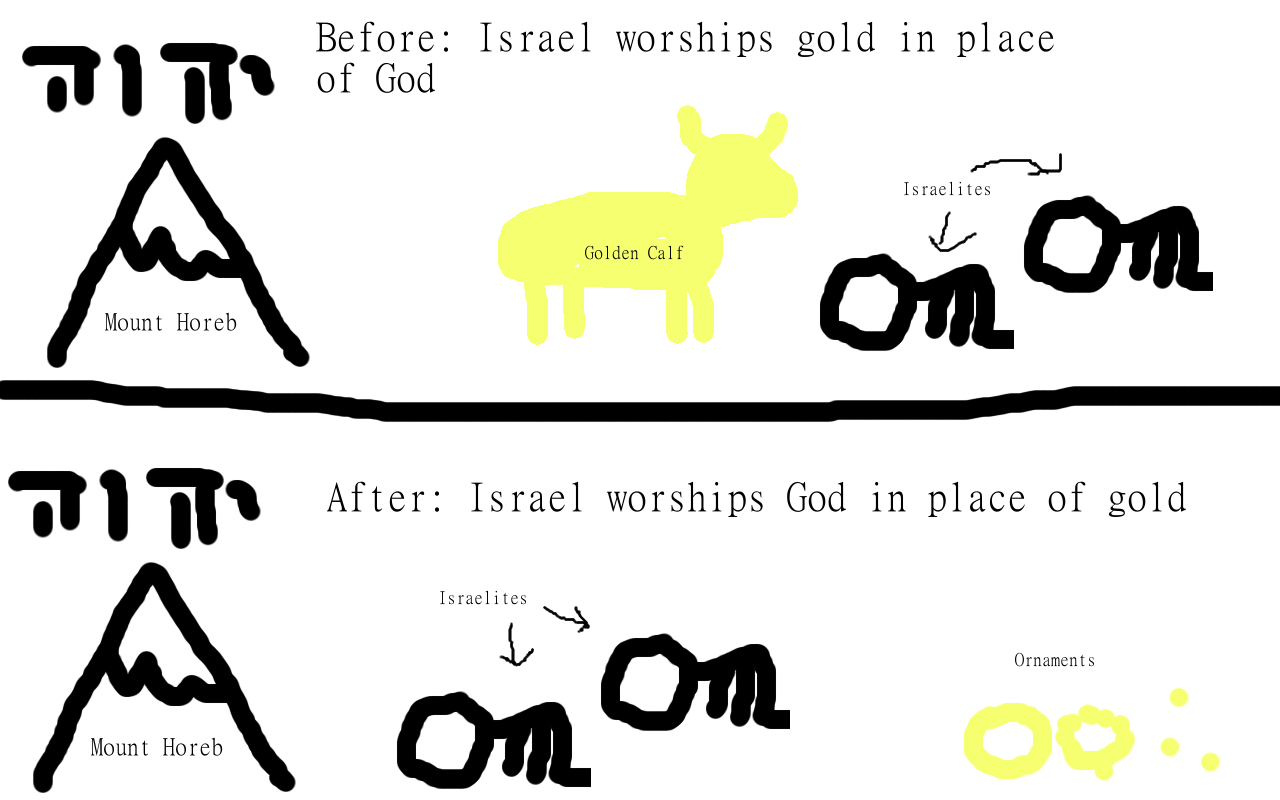 In this interpretation, the verse would be translated as, "The sons of Israel stripped themselves, their ornaments (away) from Mount Horeb."

My theory is that the verse means, "The Israelites-from-Mount-Horeb stripped off their ornaments." That is, the מ prefix is used to indicate the origin of the Israelites. Even though they weren't born at Horeb, nevertheless they dwelt there for a while so they are, in a sense, "from" Mount Horeb.

My favorite part of this interpretation is that it fits well into the verse's context. In the preceding chapter, the Israelites (being camped at Mount Horeb) make a golden calf and worship it. In this chapter, God essentially tells Moses to go chastise them for this sin. They are called a stiff-necked people, are almost threatened with destruction, and are commanded to take off their ornaments as a sort of penitential gesture to appease the wrath of Almighty God. (Comparable to wearing sackcloth, or rending one's garments, or fasting.) (c.f. Exodus 33:4-6) Therefore, it would be fitting for the verse to emphasize that the people who took off their ornaments were the same stiff-necked people who worshipped the golden calf.

An Expanded Context May Help

I don't dispute the OP's desire to translate this as "from," and think that is correct. What I think it means in context is that "from Mount Horeb" is being used as figure of speech known as metonymy, where the mountain is substituting for the idea of what happened at the mountain, and so means something to the effect of "from the Mount Horeb failure and chastising they just had."

Context makes this more clear. The OP gave v.6, but in v.3 God declares "for I will not go up in your midst, lest I consume you on the way, for you are a stiff-necked people" (NKJV, bold added) and then the reaction is vv.4-6 (NKJV, except the word in question translated in brackets to from):

4 And when the people heard this bad news, they mourned, and no one put on his ornaments. 5 For the LORD had said to Moses, “Say to the children of Israel, ‘You are a stiff-necked people. I could come up into your midst in one moment and consume you. Now therefore, take off your ornaments, that I may know what to do to you.’ ” 6 So the children of Israel stripped themselves of their ornaments [from] Mount Horeb.

So there is a shame Israel is feeling about what they have done at Mount Horeb, and how that has affected God's relation to them in that He will not be "in the midst" of them the same way He was planning to be before. So the ornaments they were no doubt wearing during the golden calf festivities (Exo 32:5-6), they are commanded to set aside (v.5) and had done so in their mourning (v.4). So "from" (i.e. because of; the preposition min can have a causal idea) Mount Horeb as the place of the experience they had there that they mourn having ever occurred.

Immediately after this, the tabernacle of meeting came into being, which was pitched outside of Israel's tents (v.7) because God was not going to dwell in their midst.

And then Israel sticks around Horeb, Moses gaining new tablets and renewing the covenant (Ch. 34), and freewill offerings for the tabernacle are called for (35:5, 9; which was God's plan for the ornaments before [see Exo 25:1-9] and still as here in ch. 35) and the congregation responds in 35:21-29 (NKJV, bold added):

20 And all the congregation of the children of Israel departed from the presence of Moses. 21 Then everyone came whose heart was stirred, and everyone whose spirit was willing, and they brought the LORD’s offering for the work of the tabernacle of meeting, for all its service, and for the holy garments. 22 They came, both men and women, as many as had a willing heart, and brought earrings and nose rings, rings and necklaces, all jewelry of gold, that is, every man who made an offering of gold to the LORD. 23 And every man, with whom was found blue, purple, and scarlet thread, fine linen, goats’ hair, red skins of rams, and badger skins, brought them. 24 Everyone who offered an offering of silver or bronze brought the LORD’s offering. And everyone with whom was found acacia wood for any work of the service, brought it. 25 All the women who were gifted artisans spun yarn with their hands, and brought what they had spun, of blue, purple, and scarlet, and fine linen. 26 And all the women whose hearts stirred with wisdom spun yarn of goats’ hair. 27 The rulers brought onyx stones, and the stones to be set in the ephod and in the breastplate, 28 and spices and oil for the light, for the anointing oil, and for the sweet incense. 29 The children of Israel brought a freewill offering to the LORD, all the men and women whose hearts were willing to bring material for all kinds of work which the LORD, by the hand of Moses, had commanded to be done.

From these ornaments the majesty of the tabernacle and its instruments was made (Exodus chapters 35-39).

So "from" the Mount Horeb experience of calf worship and the result of God's no longer dwelling in their midst, the ornaments are set aside (by God's command), to be picked up again soon as freewill offerings to adorn the tabernacle. God made beauty from ashes.

Not the answer you're looking for? Browse other questions tagged word-study grammar exodus context or ask your own question.