How historical-critical biblical scholars calculate the 490 year prophecy in Daniel 9?

The accepted date of authorship by critical scholars for the visions in Daniel (7-12) is the second century BC (Maccabean revolt 167-3 BC). The reasoning goes that the predictions in chapter 11 regarding the Maccabean revolt are too accurate to be merely coincidental. So, they postulate that the author of Daniel lived during these turbulent times and witnessed the persecution of the Jews by Antiochus Epiphanes and so wrote these fake prophecies (prophecies that were written after the fact) to bolster credibility and then added his own predictions of the end of the Seleucid empire so that people would believe that the end of times is near and that soon the persecution would be over.

The Apocalypse of the Weeks

In line with this reasoning, bible critics believe that the Apocalypse of the Weeks in Daniel 9 was written by this anonymous author to reassure his fellow brothers that the end of Gentile sovereignty is near. They believe that the author of Daniel believes himself to stand in the last week (7 years) of the 70 weeks (Sabbatical cycles) or 490 year prophecy, after which the suffering of the Jews is supposed to end according to the author himself, see 9:24-27; 12:9-13. The idea is that since the prophecies up to the time of the author were all fulfilled (since they were after the fact), this will lend credibility to the author's genuine prophecy of the "end of times", which is not too far in the future (less than seven years away). In other words, bible critics believe that the real time of the author is the last week of the 70 week prophecy, which according to them coincides with the period of the Maccabean revolt.

This is how the leading scholar in apocalyptic texts, John J. Collins, explains Daniel 9 in his book The Apocolyptic Imagination, p. 109,

The first seven weeks represent the period “from the going forth of the word to restore and rebuild Jerusalem (at the time of Daniel’s prayer, 9:23) to the coming of an anointed one, a prince (either Zerubbabel or, more probably, Joshua, the first postexilic high priest). Then sixty-two weeks pass virtually without comment. The focus of the prophecy is on the last week, the real time of the author. This is marked by the murder of an anointed one (Onias III, see Macc 4:34) and the profanation of the temple… His main concern is not in speculating on the future but in providing an assurance that the predetermined period of Gentile sovereignty is coming to an end.

The problem with the calculation of the 490 year prophecy

However I find this theory really hard to sustain as it doesn’t seem to meet the quota of 490 years as it is prophesized by Daniel 9 (the calculation seems to be exact, if it isn’t then there is no point in identifying the prince and the time of the profanation of the temple as Collins and others do). The author of Daniel is pretty clear that we are to begin to reckon the 490 years (most critical scholars agree that the author intended a calculation of 490 years or 70 weeks of years) from the time of Cyrus’ edict which is usually dated to around 538 BC, subtract from it 490 years and you will get a date around 50 BC as the “end of times” prophesized by Daniel; this date is well beyond the Maccabean period, and actually coincides with the beginning period of Roman rule! Since the book of Daniel can be dated no later than 125 BC (evidence from Qumran scrolls), then biblical scholars should be forced to admit that the visions in Daniel (at least chapter 9) are genuine and not written after the facts as they wish it to be.

In other words, how can critical scholars support their position from Daniel 9 when in fact the text points in the opposite direction and clearly contradicts the idea that the last week of the 490-year prophecy is the real time of the author?

A good overview of arguments in favour and against both a 6th-century and a 2nd-century date is provided by Wenham, 1977, "Daniel: The Basic Issues", Themelios 2(2), 49–52. He indeed lists the issue of 490 weeks as the third issue with a 2nd-century date, along with two possible solutions:

It is impossible to squeeze in 490 years between the decree of Cyrus (538 BC) and the Maccabean period, c. 170 BC. Messianic interpreters argue that if the decree of Artaxerxes in Ezra 7 (458 BC) is the starting point, this prophecy gives a fairly accurate date for Christ’s crucifixion c. AD 32. But more probably 490 is a symbolic number, equal to ten jubilees (Lv. 25).

Another solution is given by Athas, 2009, "In Search of the Seventy 'Weeks' of Daniel 9", Journal of Hebrew Scriptures 9(2). He argues that the 70 weeks need not be contiguous and successive. The 62+1 weeks are linked by וְאַחֲרֵי and must thus be considered successive, but the 7 weeks are followed by the waw in וְשָׁבֻעִים, which does not suggest successiveness as וְאַחֲרֵי does. (This does not violate the mention of 70 weeks in v. 24, because the prophecy still concerns 70 weeks in total — they are just not successive.) Athas therefore proposes to read v. 25 as (pp. 14–15):

(9:25a) Know and understand from the issuing of the word to return and rebuild Jerusalem:
(9:25b) Until an anointed leader there will be seven ‘weeks’.
(9:25c) In sixty-two ‘weeks’ you will have returned with street and conduit rebuilt, but with the anguish of the times.

The seven weeks then refer to the 49-year period without anointed leadership during the Babylonian exile (p. 16):

The 62 weeks are taken from the date of the prophecy (605 BCE; Dan. 1:1) leading to the year 171, the last week to 164. This aligns well with events during the Maccabean revolt. That the calculations seem a bit forced can be attributed to the fact that "the author of Daniel is constrained by both the 70-year schema of Jeremiah and the course of actual history" (p. 16). 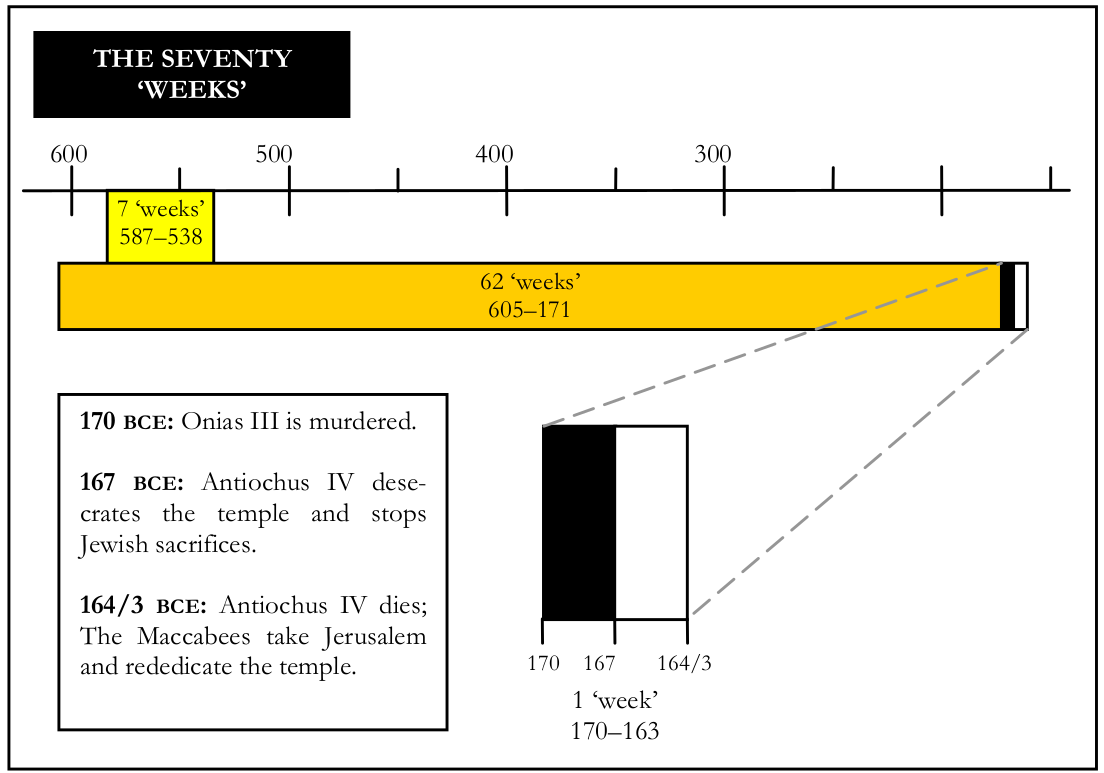 I will start my answer by disagreeing with this statement in the question:

The author of Daniel is pretty clear that we are to begin to reckon the 490 years (most critical scholars agree that the author intended a calculation of 490 years or 70 weeks of years) from the time of Cyrus’ edict which is usually dated to around 538 BC,

To support my alternative exegesis, I start by noting that king Cyrus the Great is called "anointed" in the book of Isaiah:

Thus says the LORD to his anointed, to Cyrus, whose right hand I have grasped, to subdue nations before him and to loose the belts of kings, to open doors before him so that gates will not be shut: (Is 45:1)

According to this interpretation, the sense of the passage in Dan 9:25 is:

From the issuing [by God] of the decree to restore and rebuild Jerusalem until an anointed one, a prince arrives [to carry it out], there will be a period of seven weeks.

As for the 70th week, the "anointed one" that "will be cut off and will have nothing" is High Priest Onias III [2], whose murder in 171 BC at the behest of his second successor, the hellenizing High Priest Menelaus [3], marked the beginning of the 70th week, in the middle of which Jerusalem was taken and ravaged and the Temple desecrated by Antiochus IV Epiphanes [4], whose death in 164 BC marked the ending of that week.

So, the "prince" of v. 26, who is also spoken of in v. 27 as the one who "will confirm a covenant with many for one week" and "in the middle of that week" "will bring sacrifices and offerings to a halt", as well as the "one who destroys", is clearly Antiochus IV Epiphanes.

I have developed a hypothesis to explain this discrepancy between the symbolical and actual intervals, whose basis is this statement at the beginning of the chapter:

In the first year of his reign, I, Daniel, understood by the books the number of the years, which came by the word of YHWH through Jeremiah the prophet, that He would accomplish in the desolations of Jerusalem: seventy years. (Dan 9:2) [5]

Two things are quite clear from this passage:

The relevant passages in the book of Jeremiah are:

And this whole land will become a desolate wasteland, and these nations will serve the king of Babylon for seventy years. (Jer 25:11)

These are the words of the letter that Jeremiah the prophet sent from Jerusalem to the surviving elders of the exiles, and to the priests, the prophets, and all the people, whom Nebuchadnezzar had taken into exile from Jerusalem to Babylon. This was after King Jeconiah and the queen mother, the eunuchs, the officials of Judah and Jerusalem, the craftsmen, and the metal workers had departed from Jerusalem. [...] “For thus says the Lord: When seventy years are completed for Babylon, I will visit you, and I will fulfill to you my promise and bring you back to this place. (Jer 29:1-2,10)

My hypothesis is that what the author of Daniel ch. 9 meant when he wrote that he had "understood [...] the number of the years" is that he had become aware of the difference between

Not the answer you're looking for? Browse other questions tagged daniel messianic-prophecy historical-criticism dating apocalyptic or ask your own question.