What would have been the consequences of Caiaphas rending his garments?

In Mt.26:65, Caiaphas rends his garments when he hears Jesus reply identifying himself as the Power, the Cloud rider, and Messiah.

It is understood that Caiaphas was forbidden as High Priest from doing this. (Lev.21:10 etc.) but, I would like to ask the learned gathering, what was the technical impact and consequence of him rending his garment?

I have heard anecdotally that by rending his garments, Caiaphas suspended himself from office of High Priest and had to undergo a ritual cleansing before resuming duties. One presumes then that Caiaphas was deeply troubled and affronted by Jesus’ response.

However, I don’t seem to be able to substantiate the anecdote re suspension and ritual that would allegedly have stemmed from the action of rending his garments.

Can anyone help and/or point me in the right direction for sources that could help confirm or refute this anecdotal evidence?

If we take Matthew’s text at face value, there wasn’t anything blasphemous about Jesus’ statement to Caiaphas:

64 “It is as you said. Nevertheless, I say to you, hereafter you will see the Son of Man sitting at the right hand of the Power, and coming on the clouds of heaven.” NKJV, ©1982

Evil or profane speaking of God. The essence of the crime consists in the impious purpose in using the words, and does not necessarily include the performance of any desecrating act.

The Jewish law is based on the case of the blasphemer, one of the mixed multitude that went out of Egypt with the children of Israel (Lev. xxiv. 10–23). He blasphemed the name of the Lord and cursed; was sentenced to be taken without the camp; and it was decreed that all who heard him should lay their hands upon his head, and that all the congregation should stone him. The judgment in his case was formulated in a general law in verses 15 and 16.

However, it adds the following:

The term “we-noḳeb shem YHWH,” used in verse 16 ("And he that blasphemeth the name of the Lord," A. V.), does not seem to signify that the mere pronunciation of the Ineffable Name was considered blasphemy, but that it was blasphemous to curse or revile the same. The later law, however, took the word “noḳeb” in the sense of “pronouncing,” and declared that the Ineffable Name must have been pronounced before the offender could be subjected to the punishment provided by the Law.

The Talmud states, ההוגה את השם באותיותי—“He who pronounces the Name by its letters” has no portion in the world to come.2 But, even in that statement that Jesus spoke just before Caipahas accused him of blasphemy, there isn’t any mention of the Tetragrammaton...or is there?

If Matthew is accurate, Jesus said a declension of the Greek word δύναμις, which if Jesus spoke Aramaic, he would have said גְבוּרָא (gevura), equivalent to the Hebrew גְּבוּרָה (gevura). According to Jastrow,3 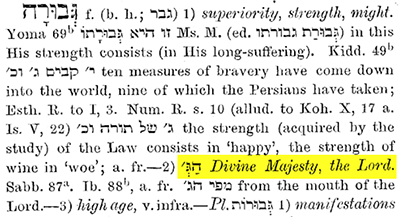 Hence, the Hebrew word גְּבוּרָה and Aramaic word גְבוּרָא were spoken (or written) as circumlocutions or כִּינּוּיִים (kinnuim)4 for the Tetragrammaton.

Matthew 26:64 is an amalgamation of two scriptures: Daniel 7:13 and Psalms 110:1. In Psa. 110:1, David sees the Messiah sitting at the right hand of Yahveh (identified by the Tetragrammaton יהוה). Since Matthew’s primary audience was the Jews, and the Jews considered it offensive to speak the divine name, it is possible that Matthew employed a kinnui in his written scripture although Jesus actually pronounced the Tetragrammaton. 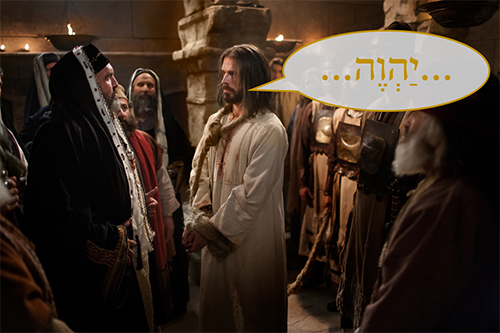 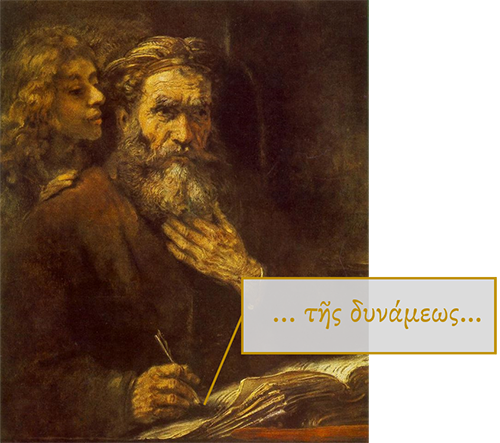 When the Lord Jesus Christ pronounced the divine name, then Caiaphas considered that blasphemy, thus rending his garment. The Talmud again, המגדף אינו חייב עד שיפרש השם—“The blasphemer is not guilty unless he pronounces the Name.”9 And also, “ The judges then arose and rent their garments, which rent was not to be resewen.”10

With respect to the rending of the garment, I could not find any indication that such an act renders one unclean. Also, it should be noted that there is no indication that Caiaphas was actually ministering in official capacity at the time he rent his garment. He may (and likely was) wearing ordinary clothes.

Jastrow, Marcus. A Dictionary of the Targumim, the Talmud Babli and Yerushalmi, and the Midrashic Literature. Vol. 1. London: Luzac; New York: Putnam, 1903.

Jastrow, Marcus. A Dictionary of the Targumim, the Talmud Babli and Yerushalmi, and the Midrashic Literature. Vol. 2. London: Luzac; New York: Putnam, 1903.

The Targums of Onkelos and Jonathan Ben Uzziel on the Pentateuch; With the Fragments of the Jerusalem Targum: from the Chaldee. Trans. Etheridge, John Wesley. Vol. 2. London: Longman, 1865.

The rabbis had, as in many cases, watered down YHWH's word / law to make exceptions where they desired. They allowed in the Mishnah 5 for the high priest to rend at the seam near the bottom of their robe near their feet in cases of sorrow, mourning, and great offense. (1)

The offense that Caiaphas expressed was that Yeshua (Jesus) had pronounced judgment against Caiaphas and indeed the entire Jerusalem council (sanhedrin).

"Coming in the clouds" was OT judgment language, attributed to the presence of YHWH, and Caiaphas knew it.

"Who layeth the beams of his chambers in the waters: who maketh the clouds his chariot: who walketh upon the wings of the wind:" (KJV. Psa. 104:3)

"I saw in the night visions, and, behold, one like the Son of man came with the clouds of heaven, and came to the Ancient of days, and they brought him near before him." (KJV, Dan. 7:13)

"The Lord is slow to anger, and great in power, and will not at all acquit the wicked: the Lord hath his way in the whirlwind and in the storm, and the clouds are the dust of his feet." (Nah. 1:3, KJV)

"And I looked, and, behold, a whirlwind came out of the north, a great cloud, and a fire infolding itself, and a brightness was about it, and out of the midst thereof as the colour of amber, out of the midst of the fire." (Ezek. 1:4, KJV)

So, when Yeshua said, "...Hereafter shall ye see the Son of man sitting on the right hand of power, and coming in the clouds of heaven." (Matt. 26:64) Caiaphas believed Yeshua to have blasphemed by pronouncing judgment, and as he didn't recognize Yeshua to be the Son of God, nor to have the power to pronounce judgment, that only YHWH could pronounce judgment, then Caiaphas believed he had an excuse under the cause of blasphemy as extreme offense to rend his garments.

According to rabbinical teaching of the Mishnah, in the Jewish practice and teaching there would have been no consequence to Caiaphas' actions.

"Ben Melech says, there is a difference between rending and tearing; tearing is in the body of a garment where there is no seam, but rending (which is what is here meant) where there is a seam: the priests rending their garments was after this manner, according to the Jewish canons (m),"an high priest rends below and a common priest above;''that is, as one of their commentators (n) interprets it, the former rends the extreme part of his garment next the feet, and the latter at the breast near the shoulder; " (2)

This is not to say that YHWH approved of Caiaphas' actions, or that Caiaphas was indeed a true high priest under the law. That is a separate discussion.

Not the answer you're looking for? Browse other questions tagged matthew or ask your own question.

4
In Matthew 20:23 and Mark 10:40 for whom have the right and left hand of Jesus been prepared?
6
What would Jesus' qualifications have been for a "worthy" person for the disciples to stay within the Matthew 10 narrative?
7
What would Peter "bind" or "loose" on earth?
6
What species of flower might Jesus have been referring to when he said, "Consider the lilies"?
2
Could the symbolic gesture of shaking off dust in Matthew 10 and Acts 13 have been steeped in some Jewish culture?
1
What "mighty works" was Sodom deprived of that would have prevented its destruction?
2
Is there a unifying answer to the different predictions that the human participants would not die until they have seen the second coming?