Regarding the ambiguity of the “hanging” of Judas in Matthew 27:5

And throwing down the pieces of silver into the temple, he departed, and he went and hanged himself.

The greek of that verse which is translated into the bold part above is the word "ἀπήγξατο" which is the reflexive middle form of Strong's 519 "ἀπάγχω".

I am trying to understand if there is any possibility for the "hanging" to be understood as a figure of speech akin to the modern idiom of "getting all choked up". As evidence, it appears that the Aristophanes play Wasps uses the same root word in a figurative sense on line 686. Macdowell translated the line:

you run about at their beck and call, a thing which infuriates me.

It really lifts my gorge when...

Both of these readings suggest that the term can be read idiomatically.

The Liddell Scott 1996 Greek Lexicon also seems to suggest this:

And Volume 1 of the Expositors Greek New Testament likewise seems to suggest that there might be some ambiguity insofar as this verse is concerned. 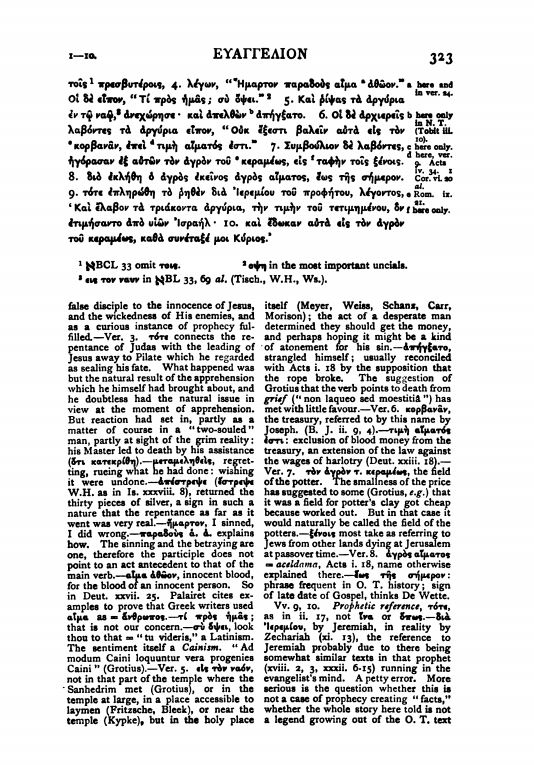 Can one (using the reflexive form of this word) conceivably "anguish oneself" or "get oneself choked up"? Is such a reading possible given the greek and the seeming rarity of this word in ancient literature?

Note, this question was originally asked over in the Christianity Stackexchange, but has been moved over here at someone's suggestion.

Spoiler alert - I do not agree. The reasons that I believe ἀπήγξατο should be understood only literally are as follows:

Therefore, the evidence appears to be strongly in favour of a literal and simple understanding of Matt 27:5, namely, "hanged himself" or perhaps, "strangled himself".

Not the answer you're looking for? Browse other questions tagged greek matthew contradiction judas or ask your own question.

11
Why is there numerical ambiguity in Matthew 18:21-22?
2
In what sense did Judas betray Jesus?
2
Does Scripture imply that Judas knew that the high-priests and elders' goal was to have Jesus killed?
2
In what way is the Christ “made a curse” in Gal 3:13?
8
In Matthew 27:3, did Judas “repent” or “feel remorse”?
9
What does the word harpagmos mean in Philippians 2:6?
2
The idiom “κτηνῶν”
1
Is this pleonasm: “according to the power of his might”? (Ephesians 1:19 YLT)
0
Why did the High Priests pay Judas? Why not just get someone else?
0
Why does Jesus say Judas had perished when he was still alive?