Correct me if I'm wrong, but I understand that there are 5 types of offerings in the bible:

As I read through the Leviticus and Numbers Books of the bible, I find it difficult to understand the differences between Sin offering and Guilt offering. 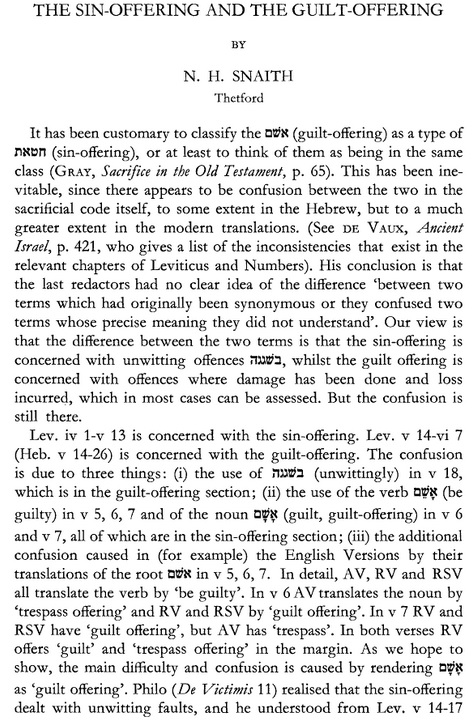 In order to distinguish between the sin offering and the guilt offering, we need to recognize the differences between the two.

The sin offering seems to have dealt with any unintentional violation of the first five commandments which governed man's relation to God.

The guilt offering was for matters of uncleanness whether intentional or unintentional. It was also for intentional sins against one’s neighbor. This was more applicable to the last five commandments which governed man’s relationship to man.

In all of these cases, sacrifice was made toward God because whether the offense was against God directly or against one's neighbor, it was still sin against God and the Law of God.

Ignorance did not excuse the offender nor did it dismiss his guilt. Sacrifice was still demanded by the Lord for satisfaction. The sacrifice was to be made

“when the sin becomes known.”

Any such sin that did not become known to the violator was later dealt with on the Great Day of Atonement on the 10th day of the seventh month of the Jewish calendar.

This article goes into detail about the confusion of Hebrew terms and gives examples.

The Sin-Offering and the Guilt-Offering

Not the answer you're looking for? Browse other questions tagged numbers leviticus sin sacrifice ambiguity or ask your own question.

4
How did the Thanksgiving offering work?
5
Numbers 28: Is the difference between noun-adjective and genitive cases for the burnt offering significant?
2
What could be the difference in the "sin offerings" in Leviticus 4?
3
What did the ram mean to ancient Hebrew shepherds as to inform it's use as a guilt/trespass offering?
2
What difference between heave-offering and wave-offering?
1
Exegesis of Numbers 28 ( specifically Numbers 28:8 ) lamb offered at twilight and the grain offering and the drink offering
2
What is the deal with offering an animal for sin offering - seems mostly male, but some female instructions exist. see Lev 4:28
1
Are there exegetical differences between 'your mother and fathers wife' in Leviticus 18:7-8?
3
Who bears the sin in Leviticus 10:17? The priest or sin offering?