Note the Greek words for "pride of life" are ἡ ἀλαζονεία τοῦ βίου.

ἀλαζονεία, ας f: a state of pride or arrogance, but with the implication of complete lack of basis for such an attitude—‘false arrogance, pretentious pride, boastful haughtiness.’

βίος has a small occurrence in the New Testament for the words translated life. The Greek word ζωή is used in the phrase eternal life and often implies such in its use. The Greek φωνή is used for Christ laying down his life, or for the rich farmer talking to himself. 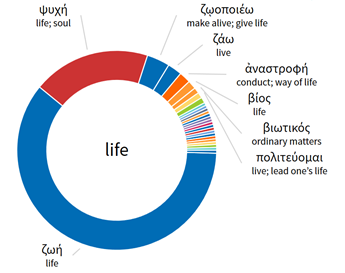 This is how βίος is translated in the ESV New Testament: 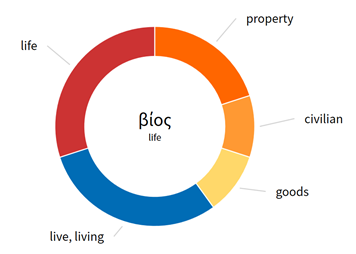 You can see how its usage fits very well into the context of Luke 8:14. For further reference here are the mean of βίος in the lexicons. Its meaning fits very much into what’s necessary to sustain life.

Thus, one of my Greek professors described "pride of life" in 1 John 2:16 as "the empty arrogance of making a living." MSW's answer is correct. He just doesn't give you the analysis of why it is correct. Jesus gives the opposite of the pride of life in the Lord's prayer, "Give us this day our daily bread."

As Jesus says, a man’s life does not consist in the abundance of the things that he possesses. Yet, the world always cherishes having an abundance of things and boasts in it and makes it a priority in this life.

Luke 12:15 KJV (15) And he said unto them, Take heed, and beware of covetousness: for a man's life consisteth not in the abundance of the things which he possesseth.

The world respects those who are rich and gives them respect while the poor get no respect. The world despises the poor.

But we as followers of Christ are not to love the world and be with the world in this.

James 2:1-6 KJV (1) My brethren, have not the faith of our Lord Jesus Christ, the Lord of glory, with respect of persons. (2) For if there come unto your assembly a man with a gold ring, in goodly apparel, and there come in also a poor man in vile raiment; (3) And ye have respect to him that weareth the gay clothing, and say unto him, Sit thou here in a good place; and say to the poor, Stand thou there, or sit here under my footstool: (4) Are ye not then partial in yourselves, and are become judges of evil thoughts? (5) Hearken, my beloved brethren, Hath not God chosen the poor of this world rich in faith, and heirs of the kingdom which he hath promised to them that love him? (6) But ye have despised the poor. Do not rich men oppress you, and draw you before the judgment seats?

When the woman saw that the tree was good for food, and that it was a delight to the eyes, and that the tree was desirable to make one wise, she took from its fruit and ate; and she gave also to her husband with her, and he ate. Then the eyes of both of them were opened, and they knew that they were naked; and they sewed fig leaves together and made themselves loin coverings (Genesis 3:6-7 NASB). .

For years now, rightly or wrongly, I've linked the above verses to the apostle John's description of

But what is "the world"? Biblically, the world (cosmos) is an organized and orderly system--a kingdom, if you will--having its roots in rebellion against God. Jesus said to Pilate,

The kingdom of this world;

The kingdom of our Lord

And of His Christ

Until that time when “the kingdom of this world” becomes “the kingdom of our Lord and of his Christ,” the two kingdoms will be in opposition with one another. Satan and his minions, armed with “the lust of the flesh, the lust of the eyes, and the pride of life,” will be in perpetual conflict with God and his angels, and with his image bearers on earth, but particularly with the children of God, who comprise a kingdom of priests unto their God (Exodus 19:6; Revelation 1:6 and 5:10).

We gain insight into how Satan opposes God and his kingdom by parsing the interaction between the serpent and Eve in the Garden of Eden, an excerpt of which begins this answer. Notice the writer of these words gives us a template for all that is in the world:

God gave to Adam one prohibition and one only, and we assume he relayed God's prohibition to his “helpmeet.”

The LORD God commanded the man, saying, “From any tree of the garden you may eat freely; but from the tree of the knowledge of good and evil you shall not eat, for in the day that you eat from it you will surely die (Genesis 2:16-17 NASBU).

Put simply, the "pride of life" is an autonymous life, a life lived in opposition to God and his command, which in Eve's case was partaking of the fruit of the tree of the knowledge of good and evil. Not without blame, Adam, who was with Eve at some point in the temptation, also disobeyed God's prohibition and ate of the fruit. Each person was culpable before holy God, though Adam's culpability was worse, since he failed not only to keep God's command, but he also failed in being the head of the woman whom God had graciously given to him (see Romans 5:12-21, where the apostle Paul puts the blame squarely on Adam, not his helpmeet).

In conclusion, at the heart of the pride of life is the illusion that “my way is the right way, so forget God.” The pride of life originates in a lie, a lie that says God's image bearers have the right to live autonymous lives, making their own way through life without reference to God. Proverbs, however, exposes that lie, telling us at least twice:

The truly wise person, instead of pridefully "leaning on his or her own understanding" (Proverbs 3:5) accedes to God's sovereign right to direct their path through life. Refusing to be wise in their own eyes (Proverbs 3:7), they humbly submit to God's will, knowing with great assurance that in the end, God will raise them up (1 Peter 5:6).

If a phrase in one Bible version is not clear, it is wise to look into how other versions of the Bible have translated the verse, other Bible version read:

16 "For all that is in the world—the lust of the flesh [craving for sensual gratification] and the lust of the eyes [greedy longings of the mind] and the pride of life [assurance in one’s own resources or in the stability of earthly things]—these do not come from the Father but are from the world [itself]."

16 "This is all there is in the world: wanting to please our sinful selves, wanting the sinful things we see, and being too proud of what we have. But none of these comes from the Father. They come from the world."

It is interesting to note that Satan used this temptation to test Jesus.

"They take pride in what they have and what they do."

9 "Then the devil led Jesus to Jerusalem. He had Jesus stand on the highest point of the temple. “If you are the Son of God,” he said, “throw yourself down from here. 10 It is written,“ ‘The Lord will command his angels to take good care of you." 11 "They will lift you up in their hands.Then you won’t trip over a stone.’ ”

For Jesus to do such a theatrical act would have been an act of pride, instead He flatly refused , and used the sciptures to reply:

Not the answer you're looking for? Browse other questions tagged 1-john or ask your own question.