What is the answer to Paul's question in I Corinthians 11:14 speaking of “long hair”?

KJV I Corinthians 11:14 Doth not even nature itself teach you, that, if a man have long hair, it is a shame unto him?

I have not seen many people actually answer this question, but instead take it as a doctrine.

Did Paul give the answer 2 verses later saying "But if any man seem to be contentious, we have no such custom, neither the churches of God"?

The context is not talking of animals it is talking about Head covering for the Christians but in general terms but can reflect on grooming:-

In short the gender gap is not to be blurred in dress and grooming by Christians, this reflects on a principle form:-

1 Corinthians 11:13-15 (DRB) You yourselves judge: doth it become a woman, to pray unto God uncovered? 14 Doth not even nature itself teach you, that a man indeed, if he nourish his hair, it is a shame unto him? 15 But if a woman nourish her hair, it is a glory to her; for her hair is given to her for a covering.

The Vulgate translates the Greek anēr koma ("a man [fancy u]p his hair") by the equivalent Latin vir comam nutriat ("nourshes/looks after his hair"). The Greek verb κομα comes from the Greek for hair (the notion of it as a covering, as opposed to trix referring to hair itself), and basically means to "Hairize" (i.e. 'to [fuss over your] hair'). It has nothing to do with length except by contextual implication.

He means men tying up their hair into lovely little braids or a ponytail, and other such 'hairing' It's seen as 'fancying' oneself up, which is repugnant to the male sex over and against it being natural for the female sex as one of their adornments (e.g. a man doesn't lose masculinity by being long or short-haired, wheras a woman in some respect loses her femininity if she is bald or very short-haired, for example); invoking examples of animals would lead of pederasty or homosexuality or murder being 'natural' for men, so let's not go that route.

The logic of this passage is about women dressing up their hair as it is a natural ornament to their body. Whereas men are not to treat their hair this way, as it is not intended for such in men. It's the reason that women are to wear a head-covering as a means not to walk around in church, wielding what is a symbol of their glory in the presence of God (and even "the angels"), before whom they should rather show humility, etc.

One wonders if Paul thought longer-than-short hair was bad why he was seen shaving it for a voluntary vow in Acts, before which time he had long hair was (we can presume) was not tressing it.

Acts 18:18 (DRB) But Paul, when he had stayed yet many days, taking his leave of the brethren, sailed thence into Syria (and with him Priscilla and Aquila), having shorn his head in Cenchrae: for he had a vow.

It seems to be more about attitude towards (having long) hair, rather than long hair, which isn't specifically mentioned. A man can have long hair as long as he doesn't do so to be, shall we say, 'fabulous.'

It's not likely that St. Paul asked the rhetorical question "does not even nature itself tell you that if a man have long hair" in an era when people invented their gods to have long hair, like Zeus.

It was seen as virility, might, etc. not 'dishonor.' So he must mean something more obviously anti-nature, like man fiddling with his hair very morning into nice plats—tressing his hair like a woman is wont to. Not simply having longer hair. Indeed, some of the oldest depictions of Christ depict Him with long hair and a beard. 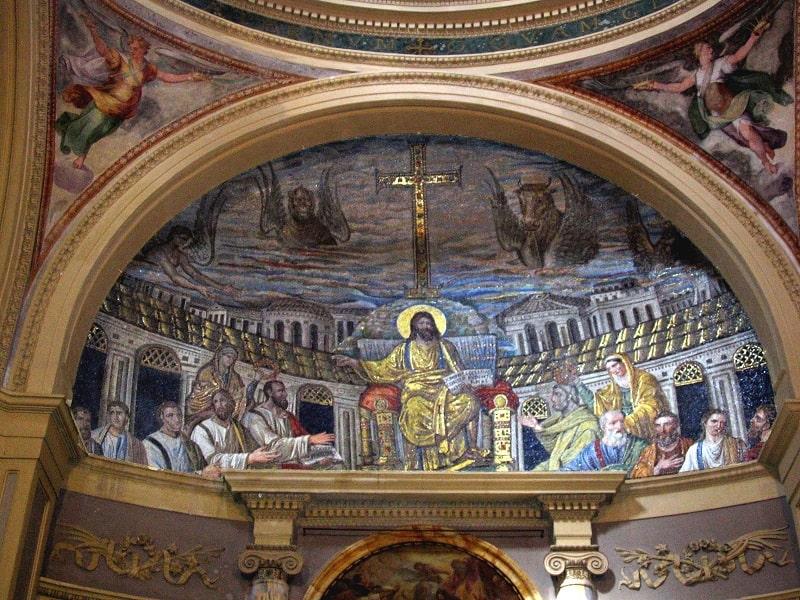 The mosaic of St. Pudenziana, circa 410. 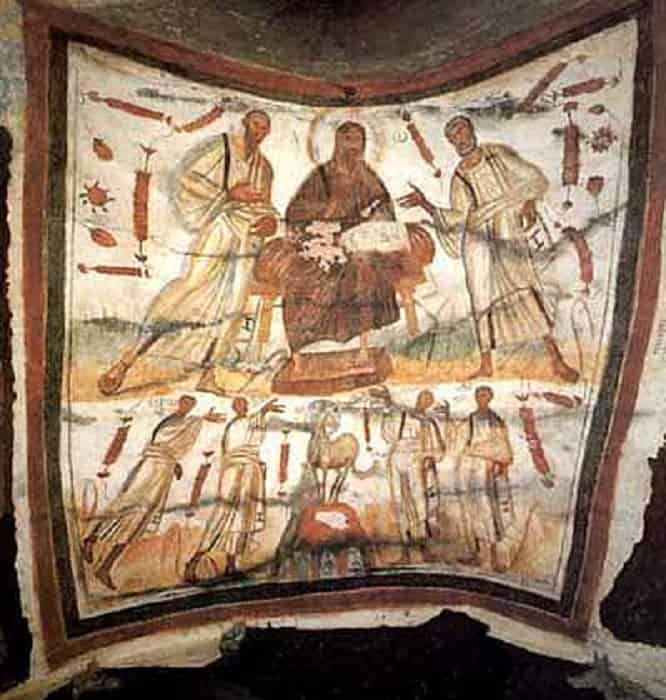 Catacombs of Marcellinus and Peter, 300s

Etc. Clearly early Christians didn't view long hair as 'shameful to have by nature,' if they gave it to Jesus Christ.

Moreover, "the greatest prophet" John the Baptist was a Nazarite ("shall drink no wine nor strong drink" was a token and key component of the Nazarite vow), and had long hair.

Numbers 6:3-5 (DRB) They [Nazarites] shall abstain from wine, and from every thing that may make a man drunk. They shall not drink vinegar of wine, or of any other drink, nor any thing that is pressed out of the grape: nor shall they eat grapes either fresh or dried. 4 All the days that they are consecrated to the Lord by vow: they shall eat nothing that cometh of the vineyard, from the raisin even to the kernel. 5 All the time of his separation no razor shall pass over his head, until the day be fulfilled of his consecration to the Lord. He shall be holy, and shall let the hair of his head grow.

This might be the same vow from which St. Paul only 'got around' to completing, thus shaving his hair. Before that, he probably had long hair..

Besides all these, we can infer that long hair was commonplace among Jews from several lines of evidence from the Old Testament, including Scripture:

Ezekiel 8:3 (DRB) And the likeness of a hand was put forth and took me by a lock [בציצת] of my head: and the spirit lifted me up between the earth and the heaven, and brought me in the vision of God into Jerusalem, near the inner gate, that looked toward the north, where was set the idol of jealousy to provoke to jealousy.

Moreover, the one of the oldest discovered Synagogues in the world (Dura-Europos) depicts on its walls men accompanying Aaron the highpriest who clearly have long hair: 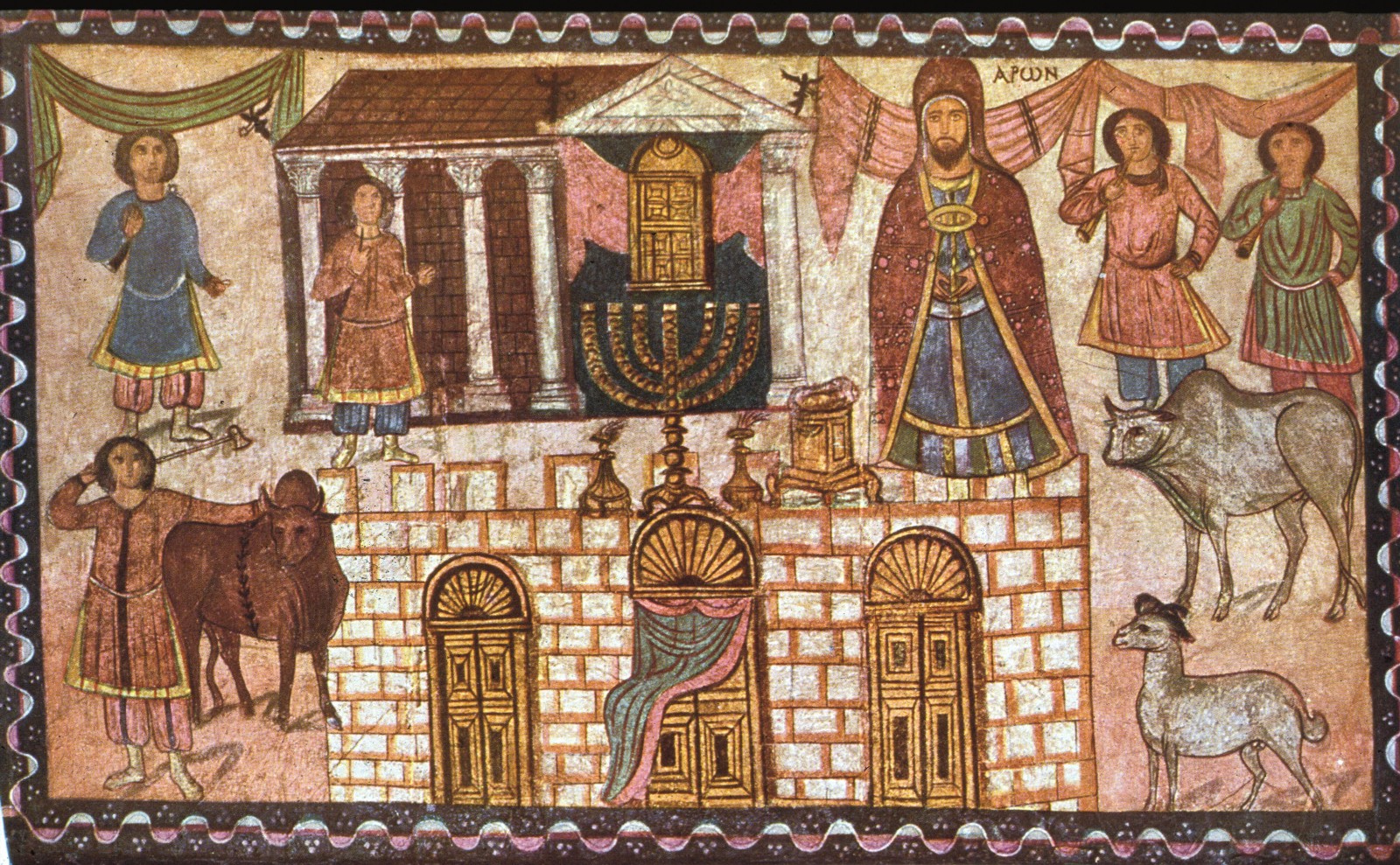 So 'long' hair is not meant, but 'fancy hair-keeping like a woman on a man'—in Judasim and Christianity, the sexes aren't interchangable identical things, but complimentary, sometimes quite opposite things.

Not the answer you're looking for? Browse other questions tagged 1-corinthians paul or ask your own question.