In Deuteronomy 10:17, are both אלהי and אדני plural or singular? If plural, how come they do not have ם at the end?

Are both אֱלֹהֵי and אֲדֹנֵי plural or singular? If plural, how come they do not have ם at the end?

To answer your question, you must understand the Hebrew genitive construction and the construct state of a noun.

According to Wikipedia on the word סְמִיכוּת,

A smikhut (סְמִיכוּת) is a combination of two nouns which have a close connection between them. The first noun in the combination is called nismakh (נִסְמָךְ), and the second [noun] is called somekh (סוֹמֵךְ).

Each of the phrases in your question is a smikhut, or “genitive construction”:

In a smikhut, the spelling of אֱלֹהִים as the נִסְמָךְ (head/first noun) will change to אֱלֹהֵי.

The spelling of the סוֹמֵךְ or second noun in the smikhut remains the same. 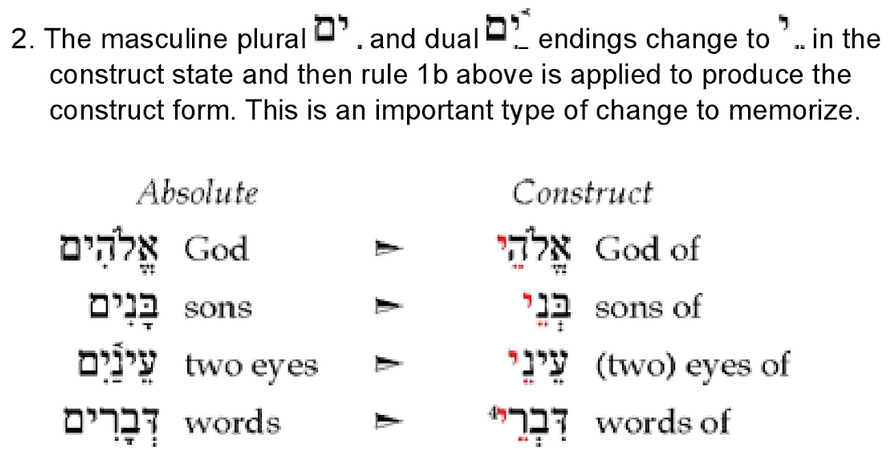 To answer the question you presented in the comments:

I gather that elohei is a plural construct noun "Gods of" However, I cannot make sense out of how it was in used in its context like "Gods of Gods"? How you understand it?

In Hebrew, the grammatically plural word אֱלֹהִים can be translated into English as the singular “god” or the plural “gods.” This would also apply to its construct form אֱלֹהֵי, except that you would add “of” after it (i.e., “[the] god of” or “[the] gods of”). The context typically assists the translator in determining which. Now, suppose you were inclined to translate it as the plural “gods of” rather than the singular “god of.” If you read further in the verse, you would encounter the phrase הָאֵל הַגָּדֹל הַגִּבֹּר וְהַנּוֹרָא (ha-el ha-hadol ha-gibbor veha-nora). Since these words are declined in the singular number, and they, like אֱלֹהֵי הָאֱלֹהִים וַאֲדֹנֵי הָאֲדֹנִים, all refer to the same subject that occurs earlier in the verse, i.e., יהוה, you could be assured that אֱלֹהֵי should be translated as the singular “the god of.” Also, there’s the pronoun הוּא (hu) which precedes the phrase in question; that pronoun is declined in the 3rd person, singular number: “he.”

Not the answer you're looking for? Browse other questions tagged hebrew grammar or ask your own question.

23
What did the 70 elders see, if man can't see God and live?
5
Is "בְּמֹתָ֑יו" Singular or Plural, and What is it's Meaning in Isa. 53:9?
1
Is the Hebrew word בוראיך in Ecclesiastes 12:1 singular or plural?
1
In Deuteronomy 8:3 why is "live" a future verb?
3
Genesis 5:2, grammatically, how does a plural pronoun refer to a singular noun?
2
Why does the KJV use (singular) "cometh" as the verb for (plural) "distress and anguish" in Proverbs 1:27?
1
Can elohim in Isaiah 53:4 be understood as gods plural, not God singular?