Why so many differing Greek words rendered “one”?

Ephesians 4:4-6 (MLVBL)
There is one ἓν body and one ἓν Spirit, just-as you were also called in one μιᾷ hope of your calling; one εἷς Lord, one μία faith, one ἓν immersion, one εἷς God and Father of all, who is over all and through all and in us all.

Unlike English, Greek is a heavily (or highly) inflected language.1 In English, one could say/write, “One Lord, one faith, one baptism,” and the adjective “one” does not change spelling according to the noun it modifies.

However, in Greek, the typical adjective will decline2 according to:3 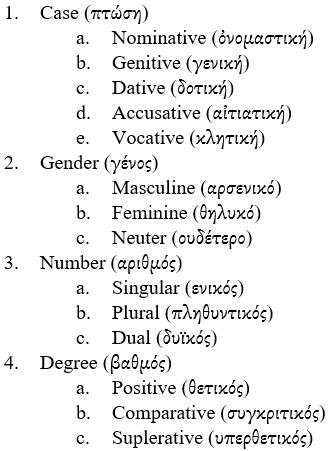 2 To decline is to inflect a substantive (e.g., noun, pronoun); to conjugate is to inflect a verb. Note: participles both decline and conjugate because they are, so to speak, part substantive, part verb.
3 Because εἷς is inherently singular—after all, it means “one”—it does not decline according to number, unlike other adjectives. Also, being a numeral, it does not decline according to degree (i.e., it is not used as a comparative or superlative).

Since adjectives must agree with the substantives4 they modify,5 then substantives also decline in the same manner (excluding degree).

4 A substantive is “a noun” or “a part of speech that can be used as subject or as object of a verb, be governed by a preposition, or the like.” (Whitney, Vol. 6, p. 6031-6032, “substantive,” n., II.). Pronouns, adjectives, adverbs, participles, and infinitives can all function as substantives. Smyth, p. 292, §1153, “The article has the power to make substantival any word or words to which it is prefixed.”
5 Mounce, p. 65, §9.8: “When an adjective functions as an attributive, it agrees with the word it modifies in case, number, and gender.”

The English adjective “one” is translated from the Greek word εἷς, which may be transliterated into English as heis.

This word εἷς is known as the λήμμα (lemma), or the dictionary/lexical form of the word. The lemma of an adjective is its form declined in the nominative case, singular number, masculine gender, and positive degree.

Since εἷς is an adjective, when you find its entry in a lexicon, the lexicon will provide its declension for the masculine, feminine, and neuter genders, all in the nominative case, singular number (highlighted yellow). It will also provide its declension in those same genders in the genitive case, singular number (highlighted orange).

With respect to Eph. 4:4–6, the lemma εἷς modifies nouns of various genders,6 hence the different declensions. Nevertheless, all possess the same general meaning: “one.”

6 Every Greek noun has an inherent grammatical gender: masculine, feminine, or neuter (Porter, p. 100, §3). Therefore, the adjective modifying the noun generally agrees with its corresponding noun in gender.

All the words for "one" are different declensions of the same word (εἷς, μία, ἕν in the lexicon). It is declined to match the noun it modifies.

μιᾷ - is dative feminine sigular (in a prepositional phrase)

There are sites like the following where you can get free classes in Biblical Greek:

As for the religious faiths Eph. 4:4-6 applies, it applies for all Christians.