Which translation for Revelation 5:10 is correct?

KJV: And hast made us unto our God kings and priests: and we shall reign on the earth.

NASB: You have made them to be a kingdom and priests to our God; and they will reign upon the earth.

There are no Greek MSS that have the reading "us" but some Latin Vulgate texts, one Coptic text and a few Church Fathers do have it.

Therefore, there is almost no evidence for the reading "us", except in the Latin Vulgate and those traditions that following it.

Here is a picture of the actual verse in Codex Sinaiticus with the "them" circled.

The overwhelming majority of ancient sources support "them", rather than "us".

There are manuscripts that support the reading of "us": the Vulgate Clementina, the Sahidic texts, and the Codex Gigas, along with a couple of the Church fathers.(This is according to my Nestle-Aland, I think the 27th edition.)

There appear to be no Greek manuscripts that support "us". I can't understand why the translators of the Authorised Version (KJV) would have translated it as such. Certainly modern translations (including my preferred NRSV) translate it as "them" exclusively.

Which translation for Revelation 5:10 is correct?

In my answer, I also discuss Revelation 5:9 because it influences the reading of 5:10. The following is the text of the King James Version (1611) with the germane text enclosed in red: 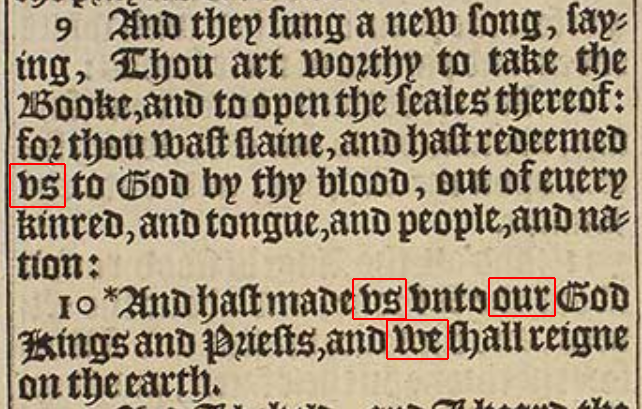 9 And they sung a new song, saying, Thou art worthy to take the Booke, and to open the seales thereof: for thou wast slaine, and hast redeemed vs to God by thy blood, out of euery kinred, and tongue, and people, and nation: 10 And hast made vs vnto our God Kings and Priests, and we shall reigne on the earth.

followed by the Greek text of the 1550 Textus Receptus (ς) by Robert Estienne:

I rely on Constantin Tischendorf’s critical apparatus in his Novum Testamentum Graece (Ti),1 in conjunction with the critical apparatus of the Nestle-Aland 28th ed. Together, they provide a comprehensive identification of variants and their witnesses. 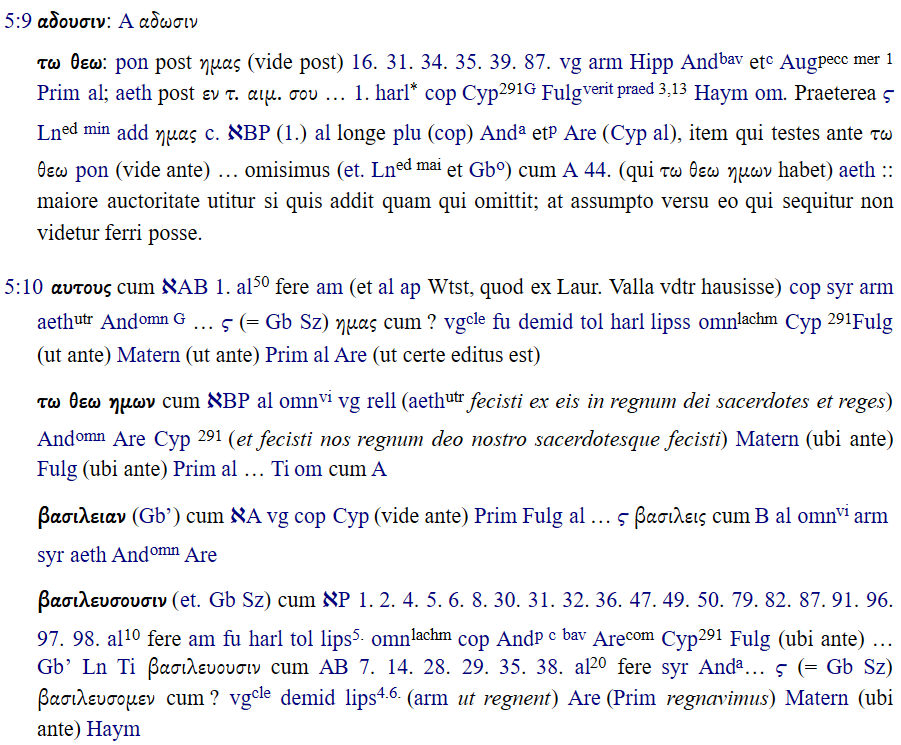 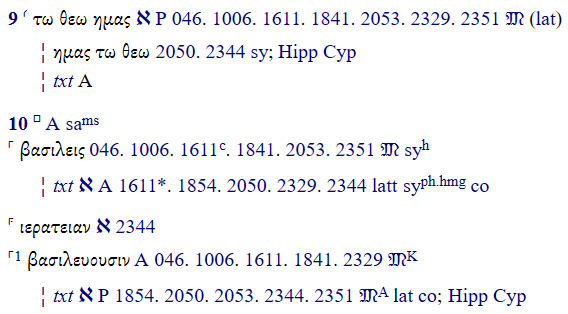 It is omitted in the Codex Alexandrinus (A) and Miniscule 44 which instead have ἡμῶν (“our”), i.e. “to our God.” It is also omitted in Lachmann’s major edition (Lned mai), Johann Jakob Griesbach’s (Gb) critical edition of the New Testament, and the Ethiopian (aeth).

According to the reading of the Codex Alexandrinus, the verse would be translated as,

...and have redeemed, by your blood, to our God out of every kindred, and tongue, and people, and nation.

Düsterdieck supports its omission and asserts that a scribe inserted the word ἡμᾶς after τῷ θεῷ “because a more accurate determination of the [direct] object is wished than is found in the words ἐκ πάσης φυλ[ῆς καὶ γλώσσης καὶ λαοῦ καὶ ἔθνους].”2 In support of his assertion that no direct object needs to be explicitly written with a verb used in conjunction with a partitive genitive (such as that in Rev. 5:9), Düsterdieck refers to 1 John 4:3,3 Matt. 25:8,4 and Acts 2:17.5

In v. 10, αὐτοὺς (“them”) is included by Codex Sinaiticus (א); Codex Alexandrinus (A); Codex Vaticanus (B); in addition to 50 others (al50; Codex Amiatinus (am) (and others, according to Johann Jakob Wettsein, who apparently received [the information] from Laurentius Valla); Coptic (cop); Syriac (syr); Armenian (arm); Ethiopian (aeth); and, all manuscripts of Andreas, Bishop of Caesarea (Andomn).

βασιλεύουσιν (“they reign/ they are reigning”) is included in Lachmann (Ln), Tischendorf (Ti), Codex Alexandrinus (A), Codex Vaticanus (B), a plethora of miniscules; Syriac (syr); and, in the Codex Augustanus, the commentary on Revelation of Andreas (Anda), Bishop of Caesarea.

βασιλεύσομεν (“we shall reign”) is included in the Textus Receptus (ς), but the Textus Receptus has βασιλεύσουσιν in the margin, which is attested by the Computensian Polyglot (α) and manuscript ιε from King Henry II’s library. βασιλεύσομεν is also included by the critical editions of Griesbach (Gb) and Scholz (Sz); Clementine Vulgate (vgcle); Codex Demidovianus (demid); Codex Lipsiensis (lipss); Armenian (arm); Arethas (Are); Primasius (Prim); and, Maternus (Matern).

Düsterdieck provides a sound theory on the origin of the variants. First, since the scribe read v. 9 («καὶ ἠγόρασας ἐν τῷ αἵματί σου ἐκ πάσης φυλῆς καὶ γλώσσης καὶ λαοῦ καὶ ἔθνους») and considered the lack of direct object odd for the verb ἠγόρασας, he inserted ἡμᾶς (“us”) as its direct object. (No direct object is necessary.)

Then, since the newly inserted ἡμᾶς (“us”) conflicted with the existing αὐτοὺς (“them”) in v. 10, the scribe changed αὐτοὺς in v. 10 to ἡμᾶς. However, the changes did not stop there. He writes,

In summary, Düsterdieck argues for the following proposed original reading:

9 And they sing a new song, saying, “You are worthy to take the book and to open its seals, for you were slain, and you redeemed [people] to God, by your blood, out of every kindred, and tongue, and people, and nation, 10 and you made them a kingdom and priests to our God, and they reign on the earth.”

Exactly what are the facts behind the textual variations? There are 24 Greek manuscript known today that include Revelation 5:9. Twenty three manuscripts have the Greek "Hemas," which, translated, is "US" in English. Only one manuscript - Codex Alexandrinus (5th century) - renders it in the third person. By far, the majority of manuscripts, whether early or late, render it in the first person.

There are a number of very old Latin translations as well, including Jerome's Latin Vulgate, and every one of them render this verse in the first person.

J. A. Seiss, in his Lectures on the Apocalypse," writes:

"Some critics and expositors have rejected "Greek - HEMAS," translated "US," for the reason that it is omitted in the Codex Alexandrinus. The Codex Sinaiticus, however, which was discovered in 1860, and which is of equal antiquity and authority with the Codex Alexandrinus, contains first person plural (US). The Codex Basilianus (also called Codex Vaticanus) contains it. The Latin, Coptic or Memphitic, and Armenian, which are of great value, all contain it. And so do all other manuscripts and versions. And to discredit it simply and only because it does not appear in that one single Codex of Alexandria, is most unreasonable and unjust to the weight of authority for its retention."

It is not that the Greek, Hemas (pronounced hey-MAS) is translated differently in the Alexandrinus, but, rather, it is omitted. But it is included in all of the manuscripts mentioned by Seiss above.

Tregelles, in his Greek New Testament, retains "us," remarking that "in verse 9 hemas should certainly be read.

Dr. David Hocking, in his commentary on the book of Revelations, writes:

"In verse 10, the word "them" and the third person plural rendering "they shall reign," are all variant readings."

Dr. Walvoord, in Every Prophecy in the Bible, p549, writes:

"Scholars continue to differ on this subject. Manuscript evidence in support of the King James Version in verses 9-10 gives considerable support to the concept that the KJV is actually the best manuscript."

3
Meaning of “pc” in the Nestle-Aland critical apparatus (Revelation 5.10)
4
What is the BEST Textual Cristicism argument for keeping “us” in Revelation 5:9 and 10?

5
Contextually, which English translation/ Greek text seems more probable in Rev. 5:10?
1
Does Christ return to Heaven after the thousand year reign, and then return to earth after the seventh trumpet?
5
Is the “7th seal” opened before the “6th seal” book of Revelation
2
Question concerning those who “wash their robes” in Revelation 7
6
Is Revelation 19:16 “ A slip of the pen” , or worded this way for another reason?
0
Understanding of Revelation 1:4,5
1
How should Revelation 11:15 be translated (so the implied pronoun and expressed referent agree)?
4
What is the correct English translation from Greek and meaning of Hebrews 1:6?
1
Is the beloved city in Revelation 20 the same as the new city in Revelation 21?
0
Does the worship of the Lamb in Revelation 5 contradict the first commandment (Exodus 20:2-4)?