In Judges 15:20 what does it mean that Samson "judged" Israel for twenty years?

KJV Judges 15:20 And he [Samson] judged Israel in the days of the Philistines twenty years.

To read Samson's story is to watch a man of action, always anxious to be in the action. At least in the KJV, he seems to speak in grunts. After his amazing exploits picking a fight with the Palestinians he massacres a whole slew of them by clubbing them to death with the jawbone of a recently dead donkey. 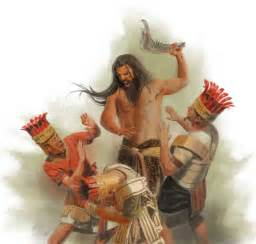 Notice that Samson's opponents don't realize that they have forgotten their shields!

After this he is exhausted, thirsty and vulnerable but God provides water from the donkey jaw and he is revived.

Then it says he judged Israel for twenty years.

So what I'm wondering is whether what he has been doing was "judging" or if he was done with all that now and is going to hear cases.

What is the job description of a "judge" in this context?

The question is in two parts - one about judging and the second about all that a "judge" does.

The operative Hebrew word is "shaphat" and the cognate root of the words used to describe what the "judges" did in the Bible book called Judges. Young says this word means to act as a magistrate. While this is true, it had very loud overtones of what we would today simply call governing. The verb is used regularly:

The function of these judges was more than just to decide disputes; it was to provide general leadership and particularly act as a military leader, God's appointed agent, to reform Israel and their constant backsliding and deliver from the hands of whoever was oppressing them at the time. All judges did this and once appointed served until their death.

After the death of each judge, Israel would rebel and turn to other gods, often the Baals, and God would appoint another judge to reform and deliver Israel. This was often done, as in the case of Abimelech, Jephthah, Gideon and Samson (at least) among their many notorious exploits and acts of heroism and sometimes rash stupidity. Despite their human frailties, God still used them to keep reforming Israel to turn the people's hearts back to him.

The last two Judges, Eli and Samuel about whose lives we know much more, were just as human and made very serious mistakes in some areas. For example, they did not rebuke their way-would sons adequately and both had very disappointing children. Nevertheless, they judged Israel for an extended time.

After asking my question I turned to the Jewish Encyclopedia which directly addresses my specific question. The part I was confused about was that they are called "judges" but the description of what their activities were seems more military. Joshua, Deborah and Samson, in particular appear to be somewhat paramilitary and vigilante. But the encyclopedia description and explanation address this very well:

The present form of the Book of Judges has given rise to the phrase "time of the Judges," which covers the period from the death of Joshua down to the revival and consolidation of Israel as a kingdom under Saul. This period, however, does not correspond with that covered by the Book of Judges, which includes part of Joshua's period; and the events under the last two judges belong to the Book of Samuel. Moreover, the designation "Judges," as well as the account given of their activity in the book in its present form, is inadequate, as the term "judge" was subsequently applied to certain persons who, without being kings, ruled over the whole of Israel like the Kings. This happened, however, only when the people were collected together on extraordinary occasions, as, for instance, in making war upon a common enemy, when the members of several or of a majority of the tribes would place themselves under the leadership of the strong warriors among them; and when the object in view had been accomplished, such leaders returned to the respective spheres of their personal influence. This influence did not extend beyond the bounds of their own tribe or of a few other tribes, though they retained the preeminence they had achieved by their leadership in Yhwh's war. In times of peace, moreover, their activities were chiefly confined to the judicial functions whence they derived their title...

This was my impression and the encyclopedia lays it out very clearly. I'm constantly amazed at the quality of this resource!

Not the answer you're looking for? Browse other questions tagged hebrew word-study judges or ask your own question.