When Paul says "I face death everyday" in 1 Corinthians 15:31, what does he mean by this? What will be the best way to interpret that scripture?

Quoting a little more of the passage for context:

And why stand we in jeopardy every hour? I protest by your rejoicing which I have in Christ Jesus our Lord, I die daily. If after the manner of men I have fought with beasts at Ephesus, what advantageth it me, if the dead rise not? let us eat and drink; for to morrow we die.
-- 1 Corinthians 15:30-32 (KJV)

Expressions such as "Why stand we in jeopardy every hour?" and "I have fought with beasts at Ephesus"(1) indicate that Paul is referring to physical threats upon his life, which the record of Acts confirms to be true:

Paul appealed to the Roman church for prayer:

Now I beseech you, brethren, for the Lord Jesus Christ's sake, and for the love of the Spirit, that ye strive together with me in your prayers to God for me; That I may be delivered from them that do not believe in Judaea; and that my service which I have for Jerusalem may be accepted of the saints;
-- Romans 15:30-31 (KJV)

Paul spoke of the need for "boldness" in proclaiming the Gospel:

And many of the brethren in the Lord, waxing confident by my bonds, are much more bold to speak the word without fear.
-- Philippians 1:14 (KJV)

But even after that we had suffered before, and were shamefully entreated, as ye know, at Philippi, we were bold in our God to speak unto you the gospel of God with much contention.
-- 1 Thessalonians 2:2 (KJV)

Paul was literally on the bleeding edge of the Gospel, and in his experience and expectation, the threat of physical death was a daily consideration.

I want to applaud you, OP, for including two different translations of the verse in question. "I die daily" seems to be a more literal translation of the Greek, but "I face death everyday" seems to convey the sense better.

Note that, in the context of Corinthians 15, Paul is speaking about the resurrection of the dead. He is essentially asking, "If there's no afterlife, why are we wasting our time suffering here on Earth as Christians? Why don't we just live it up?"

(Corinthians 15:29-34, DRB) Otherwise what shall they do that are baptized for the dead, if the dead rise not again at all? why are they then baptized for them? Why also are we in danger every hour? I die daily, I protest by your glory, brethren, which I have in Christ Jesus our Lord. If (according to man) I fought with beasts at Ephesus, what doth it profit me, if the dead rise not again? Let us eat and drink, for to morrow we shall die. Be not seduced: Evil communications corrupt good manners. Awake, ye just, and sin not. For some have not the knowledge of God, I speak it to your shame.

If we look at the context of the verse in question, especially the bolded part, it appears that Paul is alluding to his persecution as a Christian when he says "I die daily." (Christians were in danger of being martyred like Stephen)

It seems then, that Paul meant:

In his Commentary on 1 Corinthians, Thomas Aquinas seems to think that Paul means "I'm in danger of death daily" when he says "I die daily." I suspect, however, that Paul might have also been referring to his suffering persecution in general. (The two possibilities are not mutually exclusive.)

It reminds me of how St. Thecla is venerated as the first female "martyr." According to her hagiography, she was almost martyred multiple times, but her life was miraculously preserved. The point is that, while not physically being martyred, she is venerated as a "martyr" because she faced imminent death and was willing to die rather than deny Christ. 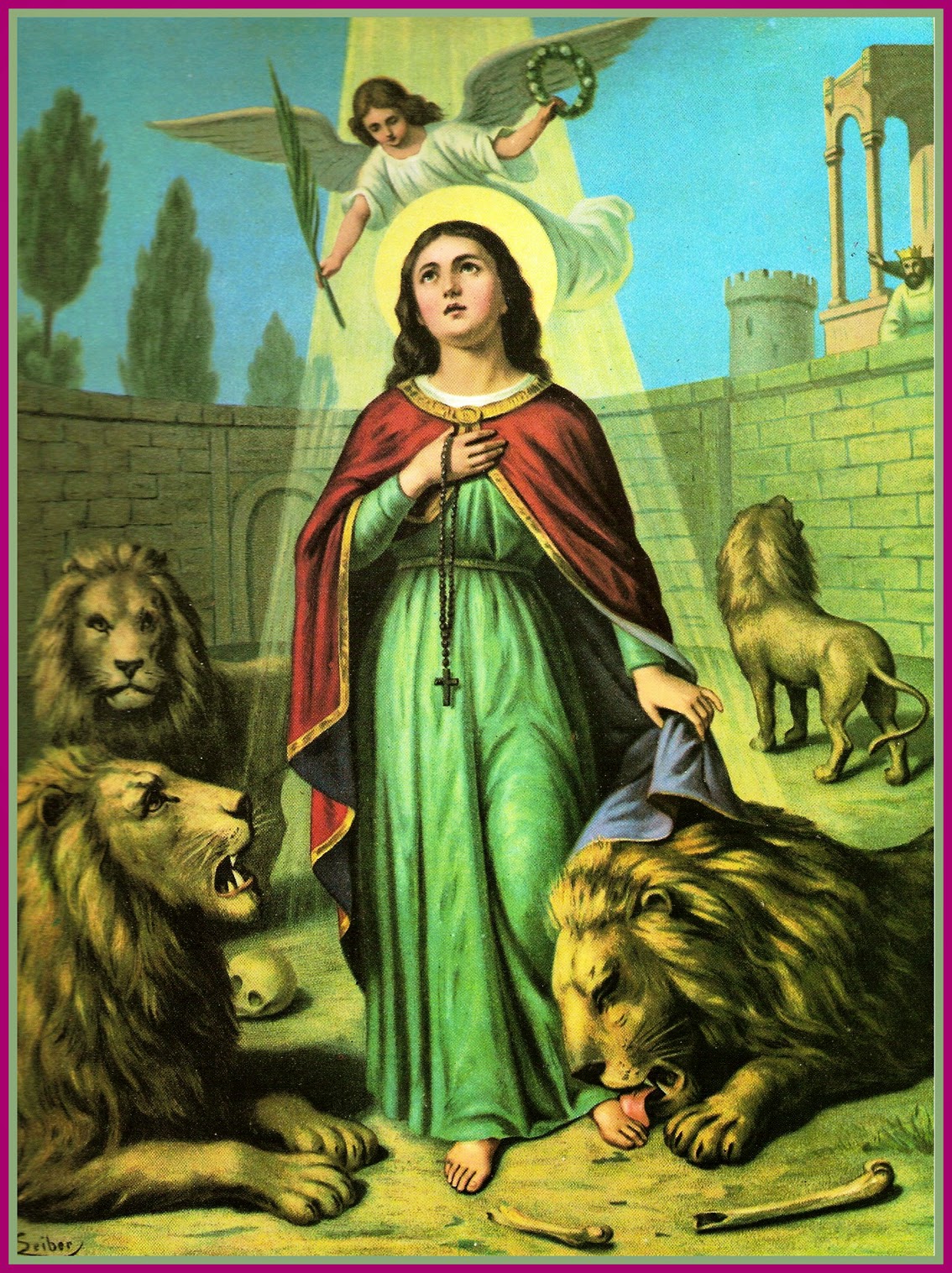 The image depicts St. Thecla receiving the crown of martyrdom from heaven despite surviving the lions.

But, hold the phone! Paul said he "dies daily" even though he doesn't! The Bible must be a book of lies because not every word is literally true! Right?

Ummm, actually there is a sense in which the verse is literally true.

Since the present tense in Koine Greek can either have a simple or a progressive aspect, depending on the context, Paul could be saying "I am dying daily." And this would be literally true! I mean, Paul is shortening his lifespan by being a Christian. (Extra-biblical writings suggest he was eventually beheaded.) In fact, everyone is "dying" at least due to age.

In context, Paul is addressing those who question the resurrection of the dead. His argument is initially circular: if there was no resurrection of the dead, then there would be no point in proclaiming that Christ is risen, because he cannot have been raised if it were not true. He also questions: what would be the point in baptising in the name of some man who is not living?

Continuing in this vein, Paul then asks why he faces death (ie. risks his life confidently and without fear) if there is no hope in the dead being raised:

And as for us, why do we endanger ourselves every hour? I face death every day—yes, just as surely as I boast about you in Christ Jesus our Lord. If I fought wild beasts in Ephesus with no more than human hopes, what have I gained? If the dead are not raised, “Let us eat and drink, for tomorrow we die.” 1 Corinthians 15: 30-32

Paul backs up his argument with his own actions: disregarding the demands of the flesh and the fear and avoidance of death, and instead risking or facing death by continuing to preach in the name of Jesus, even though people were plotting to have him killed. This is not simply having threats on his life, but behaving in a way that treats those threats as inconsequential. The details of Paul's death-defying behaviour are described in Acts:

Then some Jews came from Antioch and Iconium and won the crowd over. They stoned Paul and dragged him outside the city, thinking he was dead. But after the disciples had gathered around him, he got up and went back into the city. Acts 14: 19-20

Then Paul answered, “Why are you weeping and breaking my heart? I am ready not only to be bound, but also to die in Jerusalem for the name of the Lord Jesus.” Acts 21: 13

But he appears to more specifically refer to the riot at Ephesus:

Soon the whole city was in an uproar. The people seized Gaius and Aristarchus, Paul’s traveling companions from Macedonia, and all of them rushed into the theater together. Paul wanted to appear before the crowd, but the disciples would not let him. Even some of the officials of the province, friends of Paul, sent him a message begging him not to venture into the theater. Acts 19: 29-31

Paul's writings refer to a dichotomy between life in the spirit which is eternal (as confirmed by the resurrection), and life in the flesh, in which we are ruled by sin and death, and which ends in death.

In 1 Corinthians, he argues that if there is no resurrection, then we continue to fear death as if in death we will cease to exist, and nothing has changed - there is no good news to preach. We continue to be ruled by our avoidance of death, our instincts to survive, benefit materially and regenerate ourselves ('no more than human hopes'), obeying the demands of the flesh despite the law, which cannot free us from sin but instead binds us to sin and to this flesh (which will inevitably perish).

But by faith in Jesus' death in the flesh and his subsequent 'resurrection' in the spirit, Paul believes that Jesus demonstrated a different way to live: a life in the spirit, where death is no longer to be feared as an end, but simply the point at which one is fully released from the demands of the flesh.

But if Christ is in you, then even though your body is subject to death because of sin, the Spirit gives life because of righteousness. Romans 8:10

For if we have been united with him in a death like his, we will certainly also be united with him in a resurrection like his. For we know that our old self was crucified with him so that the body ruled by sin might be done away with, that we should no longer be slaves to sin— because anyone who has died has been set free from sin. Romans 6: 5-7

In following this example, a believer's life is not in the flesh or in what can be observed, held or possessed, but in their spiritual connection with each other and with God's unconditional love for all creation - and it is in this life that Jesus continues to live and interact with believers.

God's love and life in the spirit

In Romans, Paul quotes a similar phrase from Psalm 44 in expressing this confidence that this love of God is not hindered by death:

Who shall separate us from the love of Christ? Shall trouble or hardship or persecution or famine or nakedness or danger or sword? As it is written: “For your sake we face death all day long; we are considered as sheep to be slaughtered.” No, in all these things we are more than conquerors through him who loved us. For I am convinced that neither death nor life, neither angels nor demons, neither the present nor the future, nor any powers, neither height nor depth, nor anything else in all creation, will be able to separate us from the love of God that is in Christ Jesus our Lord. Romans 8: 35-39

So Paul was prepared to face his own death every day, because he believed that it was his life in the spirit, in connecting others to Jesus' resurrection and to God's love, that would also be 'resurrected' and ultimately endure beyond his death.

I believe that what Paul was saying is found in Gal 2.20 “I have been crucified with Christ; it is no longer I who live, but Christ lives in me; and the life which I now live in the flesh Sin is anything that goes against God’s will and His laws. To commit sin is to transgress or disobey these laws. The lust to sin dwells in human nature. In other words, it is contaminated and motivated by the sinful ... I live by faith in the Son of God, who loved me and gave Himself for me.” Galatians 2:20. In text emphasis not mine, but i agree with the writer, Paul yes faced death multiple times and even said to Agabus that he was not only ready to be bound but to also die, but i think to die daily Paul was talking more about dealing with his fleshly desires on a daily basis. He was talking more about his daily experiences as a believer understanding that it is one thing to proffess christ its another thing to live for him

Not the answer you're looking for? Browse other questions tagged 1-corinthians or ask your own question.