What is the actual number of הַשָּׁמַיִם ( the heavens), dual or plural?

The (masculine) dual ending is ־ַ֫יִם -ayim (with stress on the patakh) while the plural ending is ־ִים -îm. See §91b;90b of the grammar of Joüon and Muraoka. (Note that this means that the analysis depends on the vocalization and is not visible in the consonantal text.) Thus, this would suggest a dual for שָׁמַ֫יִם.

However, the root is שׁמי šmy, with a final yod. The plural would be שָׁמַיִים šāmayîm. This, due to phonological rules (which I do not fully understand myself), became שָׁמַ֫יִם šāmayim. Which is exactly the dual ending. Thus, this word is an apparent dual, but actually a plural form. For discussion and comparable instances of this sound change in Aramaic and Arabic, see §91f of Joüon-Muraoka.

The word is used in the plural because in the common Ancient Near Eastern worldview, there are three separate layers of heaven. Mesopotamian Cosmic Geography by Wayne Horowitz (2011, Eisenbrauns) provides a good overview of the topic.

The word שָׁמָיִם is always plural in Hebrew; there is no singular. (We call this a plurale tantum). Gen. 1:8 has שָׁמָיִם without the article and the next verse has the same word with the definite article. You can translate it literally as “heavens”, or you can paraphrase it with the English singular “heaven”. But to translate it as “heaven” in one verse and “heavens” in the next verse is not a good idea.

Of course, without the Masoretic vowel points, the suffixes would look exactly the same.

Notice how the word for horse changes endings in the diagram below. 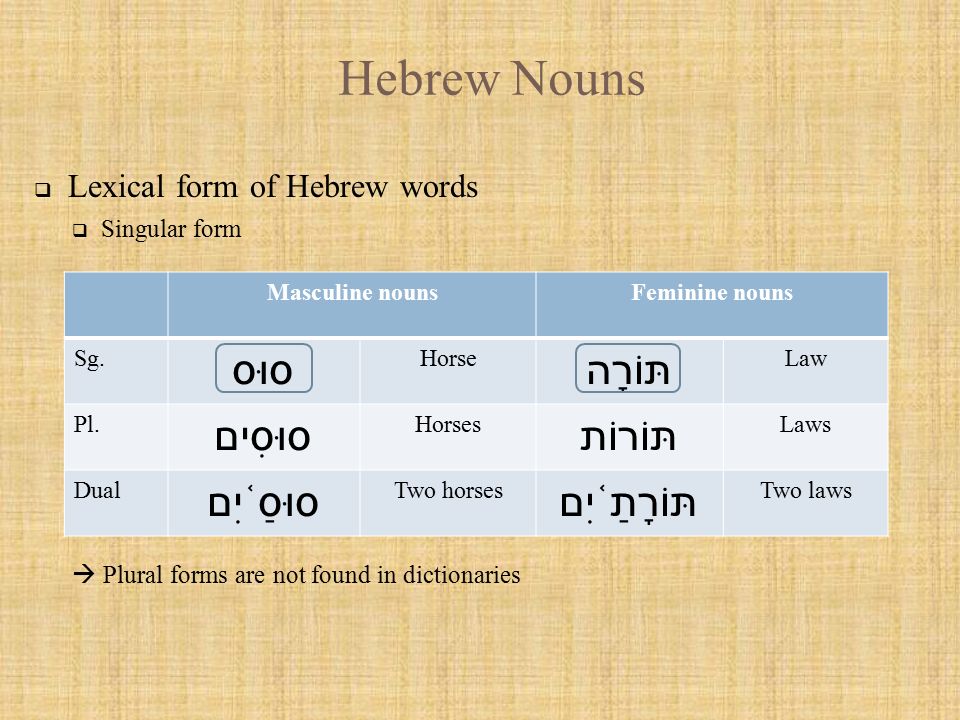 Of course, just because הַשָּׁמַיִם is grammatically dual doesn't necessarily imply that two heavens are being referred to. Just like the word σαββατον (sabbath) often appears in the NT in the grammatical plural while still having a singular meaning (as in Matthew 28:1 and elsewhere). And in English, we say "a pair of pants."

The King James Bible, the Douay-Rheims Bible, the Webster Bible, and other rigidly translated versions translated the word, shamayim in both Genesis 1:1 and in Genesis 1:5 as "the heaven". However, after the waters were divided and made into the earthy world, the heavenly worlds, and other visible matter bodies, Those lights were called the heavens (plural). In Genesis 1:1 the Hebrew text shows that the definite direct object flag (‘eth) is placed before the noun shamayim (heavens) and (ve’et or, and ‘eth) is placed before the noun ‘erets (earth) to flag or mark shamayim and ‘erets as being ‘joint’ definite direct objects of the verb, bara (created). God's Day-One Creation "the heaven and the earth" is a dual phrase, i.e. it means a "single" group of "two watery identities," more particularly described in verse two as "the waters". On day-one, before the waters were divided, the creation was not a pair, but rather, the heaven and the earth was a dual--a single gaseous-like body of waters--undivided--without form and void (having neither shape nor volume). Likewise, "mayim" (the waters of verse two) is also a very special Hebrew dual (Kee, A study on the dual form of mayim' waters--that very heaven-and-earth pair described as a single entity.

God’s Day-One Creation A type of the Word of God. CircumspectNews.com. from http://circumspectnews.com/?page_id=2364

All things visible were made from those invisible gaseous waters and were each classified as being either, heavenly or earthly bodies--one of the two. That single body of invisible waters is a type of the previously invisible WORD of God that was made visible flesh at a certain point in time under the firmament and named, Jesus, the Christ (Heb. 11:1-3 and Romans 1:20)

No. The Hebrew is Ha'shamayim. It means above the water, singular. The reason it appears to be plural is because of an often misunderstanding of the Hebrew language. In this instance, the sentence is a singular construct, meaning it is a singular heaven. Nouns are only plural in Hebrew when the sentence construct is plural. In this way we better understand what the author is attempting to describe.

Morphologically, shamayim is not plural, but dual, i.e. it means a group of two (two heavens). However, it is usually understood as singular (either heaven or heavens in English) with no real indication of dual or plural in the meaning.

5
"Under heaven" or "under the heavens" on day three of creation?
1
What are the highest heavens in Nehemiah 9:6?

22
Is there a modern English translation of the Bible that uses the second-person plural pronoun?
4
In 1 Timothy 3:4, is the the Greek word translated into English as “children” declined in the singular or plural number?
4
Psalm 19:3: whose voice?
5
Whose נְבָלָ֔ה in Job 42:8?
4
Question with regard to dual meanings in the Hebrew words "Erev" and "Boker" in Genesis 1
2
Why does Genesis 2:7 read חַיִּ֑ים plural rather than singular
2
Since the plural Elohim is used of Moses at Ex 7:1 and one person at Psalm 45:6 is there any grammatical reason to see it as a literal numeric plural?
5
Why does Genesis 3 use male pronouns for Eve?
4
Greek: Jerusalem, why is this sometimes plural?