What Does the Last Word in Luke 21:32 Mean with the Aorist Tense?

http://biblehub.com/interlinear/luke/21-32.htm I was having an argument with my friend about this verse and he is saying the aorist tense in Greek means that the last word in this verse does not necessarily mean everything has completed just that everything has started to happen: 1096 [e] genētai γένηται . shall have taken place V-ASM-3S

He got this from looking up the aorist tense in the Merriam Webster dictionary: https://www.merriam-webster.com/dictionary/aorist "an inflectional form of a verb typically denoting simple occurrence of an action without reference to its completeness, duration, or repetition"

To me, it just seems to not describe the duration or whether it was repeated it doesn't mean that the action wasn't complete. So does it mean everything has happened or possibly just that everything has started?

EDIT: could this imply that the "all things" talked about here have multiple fulfillments? What are the major variations of the "double-fulfillment" hermeneutic?

What your friend seems to be referring to is called an "ingressive aorist" which does not seem to be covered by the lesson you cite but is in fact one of the ways the aorist is used. This is not really terribly different for how we often use the "past tense" in English, such as "In 2018 I entered college". Hopefully I didn't enter only once but rather "began attending" college. Here is Mounce introducing some of the ways the aorist is much more than simply "past tense":

...Because this is the basic genius of the aorist, it can have a phenomenally wide range of usage. You can be looking at the action as a whole but paying special attention to the beginning (“ingressive”) or to the end (“consummative”). It can describes something that simply is regardless of any time reference (“gnomic”).

But my favorite is to proleptic (futuristic) use of the aorist. Because time is secondary, the aorist can describe a future event and emphasize the certainty of the action. It is not a common usage, but it does show how we need to keep the idea of “time” in its proper place...

So your friend appears to be correct, that we might be looking at an ingressive aorist. Context will make it clearer which type of aorist we are dealing with.

The KJV seems to emphasize the completion, suggesting they take it as "consummative":

Verily I say unto you, This generation shall not pass away, till all be fulfilled.

That seems to be how it is generally rendered:

While I think this is a legitimate reading I might personally translate with a single word such as "until all these things occur" or "happen".

I think @Ruminator has answered very well. I also think that the key to understanding this passage is "all [these things]" (Gr: panta). All [these things] are those that Jesus has just been discussing starting at v6 such as: false christs, wars, famines, earthquakes, persecution, betrayals, Jerusalem surrounded, signs in the heavens, etc, etc. In the same discourse as recorded by Matthew 24:6, He says, "The end is not yet". Thus, both semantically and syntactically, there is no sense of a perfect completion as implied is some translations (eg, the NRSV, "have taken place"). Therefore, Ruminator's version I like the best.

So one possibility is that the last word in Luke 21:32 is the "aorist ingressive" meaning a change of state or the beginning of an action. The aorist does not imply this, it is just compatible with this: https://hermeneutics.stackexchange.com/a/8275 thanks to David https://hermeneutics.stackexchange.com/users/2215/d%c9%91v%c3%afd and the ingressive is one of the tenses of the aorist. According to Wallace in "Greek Grammar Beyond the Basics" page 768 the tenses of the aorist are:

Or, to quote another source: "Aorist. A verb with punctiliar action, having perfective verbal aspect:

These are treated as grammatical labels or tenses but it really seems to be something derived from the more general context: https://faculty.gordon.edu/hu/bi/ted_hildebrandt/new_testament_greek/text/mathewson-rethinkinggreekverbsaspect-2006html2.htm 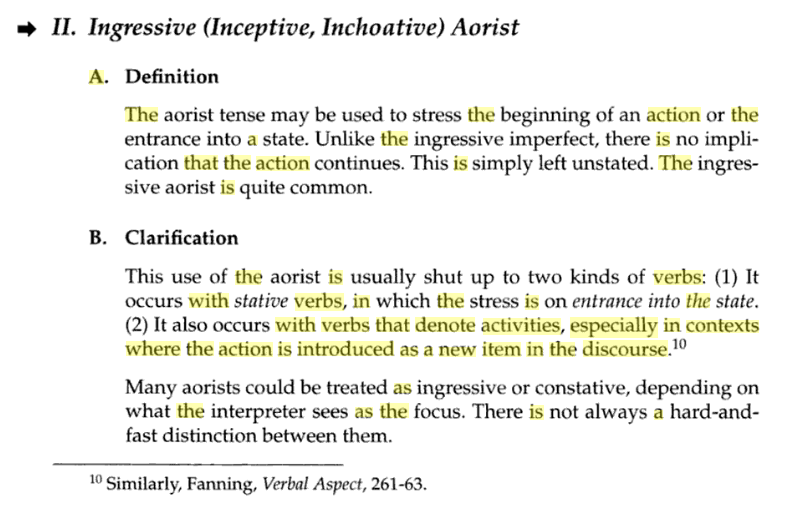 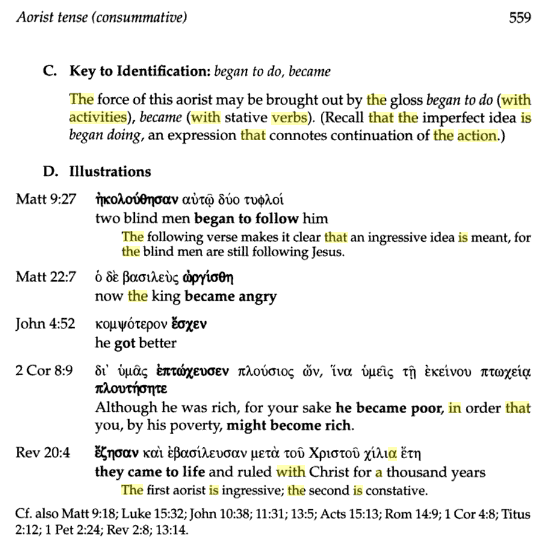 It seems what mostly decides the tense here is what you think the context is and hence what your own eschatology would dictate.

Also, see this post on the same subject on the Christian Forums: https://www.christianforums.com/threads/luke-21-32-and-the-aorist-tense-in-greek.8073305/

Not the answer you're looking for? Browse other questions tagged greek eschatology linguistics or ask your own question.

8
What Is The Aorist Tense Of A Verb?
8
What are the major variations of the "double-fulfillment" hermeneutic?