Did Peter cut off the slave's ear to disqualify him as a priest (John 18:10)?

In John 18:10 (as well as the other gospels), Peter cuts off the ear of the slave of the high priest (NRSV):

Then Simon Peter, who had a sword, drew it, struck the high priest’s slave, and cut off his right ear. The slave’s name was Malchus.

Josephus, in Antiquities 14.13.10 (366), has a similar story about Antigonus cutting off Hyrcanus's ears to disqualify him from high priesthood.

but being afraid that Hyrcanus, who was under the guard of the Parthians, might have his kingdom restored to him by the multitude, he cut off his ears, and thereby took care that the high priesthood should never come to him any more, because he was maimed, while the law required that this dignity should belong to none but such as had all their members entire.

Did Peter, like Antigonus, cut off Malchus's ear to disqualify him from serving as a priest?

The two events clearly share something very specific in common (the cutting of an ear); but unlike the case of Hyrcanus, there seems to be no obvious motivation: why would Peter care if Malchus is able to serve or not? It also isn't clear from the text if Malchus is a priest himself.

I cannot find anything in the text of John 18:3-10 (or Luke 22:49, 50) linking this incident to Malchus and the priesthood. The facts that we do know include the following:

The intention of the incident appears more to contrast the earthly intentions of Peter and the mob with the heavenly kingdom of Jesus whose gentle rebuke and miraculous healing would have both embarrassed Peter and awed the mob of soldiers, if they cared. The fact that despite this, they still arrested Jesus served to highlight how blind they had become to Jesus real intention and mission.

This was not the only display of Jesus divinity that night. Only moments before when the mob approached in the garden Jesus asked them who they sought. They replied "Jesus of Nazareth". He then replied "I AM" and the crowd fell back, dazzled and overcome. (John 18:4-6) There could be little else that Jesus could have done to better identify Himself as the Lord Jehovah, Messiah than by:

A few thoughts that have to some extent already been mentioned:

1) The high priest was determined by direct lineage, therefore only a relative of the high priest, not his slave, could become the next high priest.

And the anointed priest that shall be in [Aaron's] stead from among his sons shall offer it, it is a due for ever; it shall be wholly made to smoke unto the LORD (Lev 6:15, cf. the lineage in 1 Chron 5:27ff)

2) I'm not sure it's possible to aim a sword well enough to cut off the ear of someone trying to dodge your sword.

I take this truth to be self-evident. If anyone can prove otherwise, please upload the proof to youtube and send me the link.

3) The emphasis of the text, as b a rightly points out in his comment, is to contrast Peter's violence and failure to understand Jesus' purpose, with Jesus' obedience to God. Jesus' answer to Peter indicates that Peter was not trying to disqualify Malchus from high priesthood, but trying to prevent Jesus' arrest.

So Jesus said to Peter, “Put your sword into the sheath. Shall I not drink the cup which My Father has given Me?” (Jn 18:11) 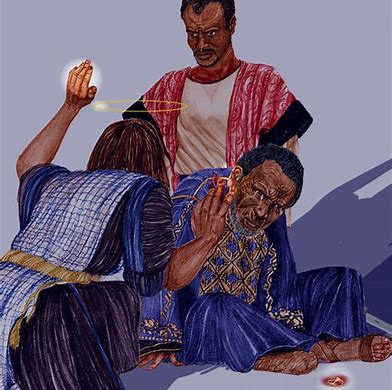 The tale of Antigonus cutting off Hyrcanus may well have been around and might have provided the framing of the story. However the more important messages are:

And the amazingly significant contemporary events that provide the context are:

Now, John's baptism/mikveh was essential because in the kingdom every Jew will be a king and a priest. IE: a "kingdom of kings and priests". And mikveh/baptism was a requirement. This is why Peter's gospel is "believe and be baptized".

So it would not be the denial of being a priest in this life but also in the next (which could be any minute)!

Not the answer you're looking for? Browse other questions tagged john leviticus peter passion-narrative josephus or ask your own question.

11
Why did John make such a big deal about being a faster runner than Peter?
9
What does the Old Testament phrase 'cut off from their people' mean?
14
In John 18:10 why does John note the name of the servant whose ear was cut off?
4
Regarding Jesus' arrest, why might the gospels differ so much?
5
Is being "cut off from one's people" the cause or effect of sin?
2
In Galatians 2:11-13 why does Peter fear the Jewish believers?
2
No broken bones - spiritual or physical?
1
From the account in John 18 did Peter just deny being a follower of Christ, or did he actually disown following Christ?
0
Did Pilate know that during the arrest of Jesus, Jesus healed Malchus' ear?
3
Why was Peter interrogated more than the other disciple in John 18:17:27?