I'm working through the 'Graded Reader of Biblical Hebrew' by Van Pelt & Pratico. In the second exercise, Genesis 2:1-3, I parsed (וַיִּשְׁבֹּת֙) as Piel imperfect 3ms WC, however, the book indicates it is Qal.

The book doesn't go into any detail on why this is the case. I had assumed the presence of the Daghesh Forte in the second root letter was a diagnostic for Piel.

Why is this verb a Qal and is there a general rule regarding the presence of the Daghesh Forte in the 2nd root consonant for Qal verbs? 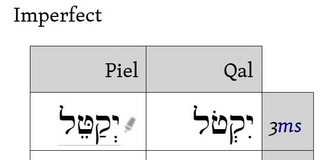 The dagesh is not from the piel for this reason. Note in the piel imperfect the yod has a sheva and the next consonant has a regular vowel. Thus, this next consonant would be an open syllable, except on the piel the dagesh forte doubles the consonant closing the syllable with the first of the doubled letters.

On the other hand, notice the qal vowel points. The hireq is under the yod (not the shewa). The first letter after the yod has a shewa. Thus, it closes the syllable. Thus, in the case of וַיִּשְׁבֹּת֙ the dagesh is not a dagesh forte, but a dagesh lene. It doesn't double the consonant (that would be difficult on a closed syllable), it changes the pronunciation.

In short, the dagesh forte of a piel will not have a constant with a sheva preceding it.

TL;DR: That is a dagesh lene, and the vowels match those of the qal and not the pi'el in any case. The dagesh forte that you're using for your diagnostic must follow a vowel other than sheva.

For more detail, read on...

There are two types of motivations for the use of a dagesh in Biblical Hebrew. (This may be review for you, but I believe it's the source of your mistake, so I'll go over it as clearly as I can!)

The first, dagesh lene, is purely phonological. This means that it's triggered by the sounds that surround it. Notice that this does not include being triggered by the conjugation, the binyan, or the meaning of nearby elements. Not including it wouldn't change the meaning, it would be wrong.

It affects only six consonants: ב‬ beth, ג‬ gimel, ד‬ daleth, כ‬ kaph, פ‬ pe and ת‬ tav. These are the consonants that had two different variants in Hebrew when pointing was invented. To a linguist, the variants make sense: they are stops vs. fricatives. For example, כ is [k] with a dagesh and [x] without; the difference between those two sounds is that one is sudden and the other is continuous.1

To bring it all together, you can expect to see ב,ג,ד,כ,פ,ת with a dagesh after a consonant or sheva even when it is not a clue as to the binyan. That's what we see in וַישְׁבֹּת.

The other type, dagesh forte, is due to a different cause and does give a clue as to the conjugation, binyan, or meaning of nearby elements (for example, it appears after the definite article). It can also affect more letters, even ones without stop/fricative variants, by lengthening them instead.2

It's not always possible to disambiguate them, but because you can expect to see dagesh after a consonant or sheva, you know not to base your parsing on it.

Okay, you might ask, then of what use is the dagesh forte in identifying the pi'el ??

The answer is that you've mistaken the vowels for this conjugation. שבת is a strong root (without guttural, geminate, or weak letters), so we can treat it normally.

Notice the difference. In the qal, between the first and second radical we have a sheva: שְׁבּ. This means we know the ב must have a dagesh lene and therefore it's not a clue about the pi'el.

But in the pi'el, between the first and second radical we have the vowel patakh: שַׁבּ. This means the dagesh on that ב must be a dagesh forte because it couldn't be a dagesh lene. So it's a clue about the pi'el.

1 In Modern Hebrew fewer distinctions of this kind are made than in Biblical Hebrew.

2 Some consonants "reject" the dagesh forte. The usual result is that the preceding vowel changes.

In order to find the building you can use the old shortcut of "he yesterday was...".

So for your question: he yesterday שבת so it's qal.