I was wondering: Who is the "Spirit of truth" in this text ?

13 But when he, the Spirit of truth, comes, he will guide you into all the truth. He will not speak on his own; he will speak only what he hears, and he will tell you what is yet to come.

14 He will glorify me because it is from me that he will receive what he will make known to you.”

(NASB) But the Helper, the Holy Spirit, whom the Father will send in My name, He will teach you all things, and bring to your remembrance all that I said to you.

Jesus Himself speaks of our baptism into His passion and death, so as to be raised with Him (Galatians 3:27; Romans 6:3):

Matthew 28:19 (NASB) Go therefore and make disciples of all the nations, baptizing them in the name of the Father and the Son and the Holy Spirit

God has a Son, and a Spirit, speaking in human terms. Intricately connected and considered together.

The Holy Spirit is He that proceeds from the Father, God, (as to His generation, or origin as a divine person), and testifies of the Son (John 16:14). He has life from the Father via the Son (again, intimate union), just as the Son Himself lives because of the Father (John 16:15; 6:57).

The same sanctifies us and applies the merits of Christ to us (1 Corinthiains 6:11), convicts the world of its sin (John 16:8).

John the Baptist says, with reference to Jesus, when Jesus was about to begin His ministry and preach the good news of His redemption of mankind that:

Matthew 3:11 (NASB) As for me, I baptize you with water for repentance, but He who is coming after me is mightier than I, and I am not fit to remove His sandals; He will baptize you with the Holy Spirit and fire.

When Jesus appeared to his disciples alive again, encouraging them to preach the good news to the whole world, He makes reference to this:

Acts 1:4-5 (NASB) Gathering them together, He commanded them not to leave Jerusalem, but to wait for what the Father had promised, "Which," He said, "you heard of from Me; for John baptized with water, but you will be baptized with the Holy Spirit not many days from now."

Then we read that on the day of Pentecost, 40 days after Christ rose from the dead, the following happened:

Acts 1:14-16, 2:22 (NASB) These all with one mind were continually devoting themselves to prayer, along with the women, and Mary the mother of Jesus, and with His brothers. At this time Peter stood up in the midst of the brethren (a gathering of about one hundred and twenty persons was there together), and said, "Brethren, the Scripture had to be fulfilled, which the Holy Spirit foretold by the mouth of David concerning Judas, who became a guide to those who arrested Jesus.

Notice also that the Holy Spirit is the One who inspires the writers of Scripture. The Apostle Peter speaks of Him when he writes: (ASV) For no prophecy ever came by the will of man: but men spake from God, being moved by the Holy Spirit. 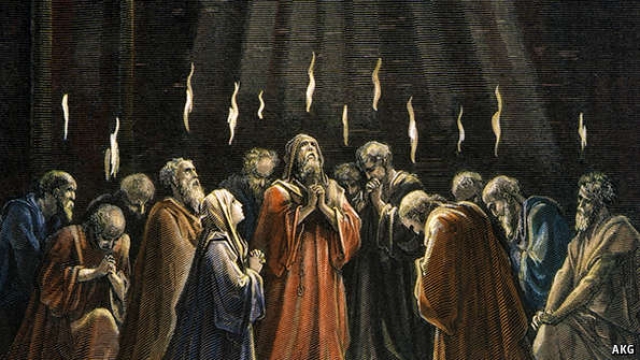 When the day of Pentecost had come, they were all together in one place. And suddenly there came from heaven a noise like a violent rushing wind, and it filled the whole house where they were sitting. And there appeared to them tongues as of fire distributing themselves, and they rested on each one of them. And they were all filled with the Holy Spirit and began to speak with other tongues, as the Spirit was giving them utterance. Now there were Jews living in Jerusalem, devout men from every nation under heaven. And when this sound occurred, the crowd came together, and were bewildered because each one of them was hearing them speak in his own language.

Because the Holy Spirit of God is God's Spirit, He is called God:

Acts 5:3-4 (NASB) But Peter said, "Ananias, why has Satan filled your heart to lie to the Holy Spirit and to keep back some of the price of the land? "While it remained unsold, did it not remain your own? And after it was sold, was it not under your control? Why is it that you have conceived this deed in your heart? You have not lied to men but to God."

Almost all translations have John 16:13 well translated as something like, "But when he [=that person] the Holy Spirit has come..." (Eg, NIV, ESV, NRSV, NASB, etc) The demonstrative pronoun, ekeinos, used here nominative masculine singular and refers back to a more distant antecedent in John 16:6-11, namely the parakletos = advocate, helper, comforter, etc. (See Analytical Lexicon of the New Testament, Friberg, Friberg, Miller; Trafford Publishing, etc)

This grammatical matter at hand is the use of a masculine demonstrative pronoun, ekeinos, with a neuter noun, "the holy Spirit". This is (I believe) not just John struggling with a foreign language, but a real attempt to drive home the point of the personhood of the Holy Spirit. (See above reference)

22Judas saith unto him, not Iscariot, Lord, how is it that thou wilt manifest thyself unto us, and not unto the world?
23Jesus answered and said unto him, If a man love me, he will keep my words: and my Father will love him, and WE will come unto him, and make our abode with him.
-- John 14:22-23 (KJV)

The Spirit of Truth is none other than the Father Himself.

Then said Jesus unto them, When ye have lifted up the Son of man, then shall ye know that I am he, and that I do nothing of myself; but as my Father hath taught me, I speak these things.
-- John 8:28

49For I have not spoken of myself; but the Father which sent me, he gave me a commandment, what I should say, and what I should speak. 50And I know that his commandment is life everlasting: whatsoever I speak therefore, even as the Father said unto me, so I speak.
-- John 12:49-50 (KJV)

Believest thou not that I am in the Father, and the Father in me? the words that I speak unto you I speak not of myself: but the Father that dwelleth in me, he doeth the works.
-- John 14:10 (KJV)

Howbeit when he, the Spirit of truth, is come, he will guide you into all truth: for he shall not speak of himself; but whatsoever he shall hear, that shall he speak: and he will shew you things to come.
-- John 16:13 (KJV)

The Father is the Son is the Spirit of Truth.

Not the answer you're looking for? Browse other questions tagged john pneumatology or ask your own question.

7
Is there biblical scholarship on the addition of “and is now come” by John in John 4:23 and John 5:25?
3
Is the meaning of the word 'spirit' in Luke 23:46 the same as in John 16:26?
4
In John 1:1-3, translated pronouns as “him” or “it”? (Neuter or masculine?)
3
Was the baptism by Jesus' disciples representing repentance? John 3:26
2
What is meant by “send Him to you” in John 16:7
2
When did Jesus go to the Father? John 16:7
4
Are the mysteries in the Spirit (that no-one understands) uttered in a language that can be interpreted via the gift of interpretation of tongues?
2
Who sends the Holy Spirit? The Son or the Father?
1
When a Christian sins and grieves the Holy Spirit, is the grief experienced by the Holy Spirit only or by the Christian as well?