In Exodus 22:2 when may the intruder be killed?

I have been trying to figure out what the above text is referring to but I'm a little bit confused here.In one instance if a thief is found stealing & gets killed along the process there is no guilt for his bloodshed but the next verse seems to be saying otherwise

How can this text be understood?

The reason for this distinction is explained here,

A thief caught breaking in by night may be killed without any guilt being incurred by his death, but not if the act take place by day. In the dark the householder would probably not be able to recognize the burglar, so as to bring him to justice, nor would he know whether he might not intend murder: a mortal blow, given in defence of his life and property, would therefore be excusable under the circumstances: but no such excuse could be made for it in the light of day. (Cambridge Bible for Schools and Colleges).

The juris prudence of the Torah is largely lex talis aka "an eye for an eye" where retribution should be commensurate with the crime. God may punish double or more for sin but humans must not murder for a property crime.

If a householder kills an intruder the judges should presume that he was in fear for his life and rule the killing self defense and hold the householder innocent.

This law took away any protection a thief might imagine he had from the cover of night.

So, the risk assessment for a thief during those days was, perpetrate my crime:

"Is the thing I'm coveting worth the cost?"

Such a system wouldn't deter everyone who might consider theft, but Israel didn't need a prison system. The cost of security, policing and welfare would be nowhere near the levels they are today had such judgments remained part of the justice system.

Here is a graph of this particular type of crime in Australia: 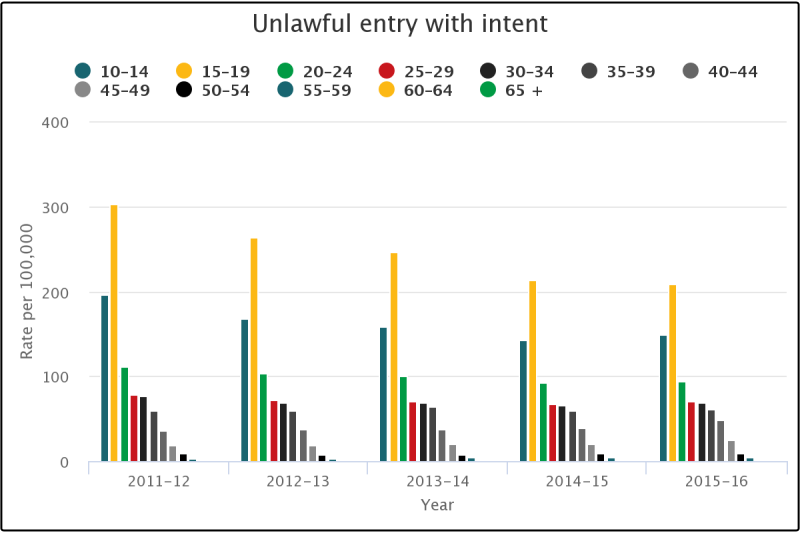 What is immediately obvious?

Well, head and shoulders above all other groups are the two groups 10-14 and 15-19. The reason for this is, the law treats those under 18 differently to the rest of the community. Notice there is very little change from year to year in the other groups.

Those adults of a criminal mindset will take into account the leniency of the justice system towards minors in their risk assessment of committing a crime, and will send their children to do it for them. This would not be the case under the Law that was given to Moses. A man would be very reluctant to commit such a crime knowing the cost, but he would be very, very reluctant to send his son to do it for him.

The trend downwards for the two groups over the years in regard to this crime is not explained. However, it would foolish to imagine that children or their parents have been deterred by the system, or that the community has not borne a greater cost in regard to security, police numbers, and expenditure on welfare.

Not the answer you're looking for? Browse other questions tagged exodus law or ask your own question.

3
What is the difference between “the law” and “the commandment” given by God to Moses? (Exodus 24:12)
5
How did Moses already know the law in Exodus 18:16?
4
Laws About Slavery In Exodus
1
What happened to the manslayer in Exodus 21 before the appointment of the cities of refuge?
1
How did Zipporah know that circumcision was the cause of the death threat in Exodus 4:25?
1
Were the golden bells intended for Aaron or the people in Exodus 28:33-35?
2
When God said remember in Exodus 20:8 was he referring to Genesis 2:2 or Exodus 16:23?
2
Which translation for Exodus 22:3 is correct, ESV or NIV?
3
Firstborn killed by a band of destroying angels?