How should Revelation 11:15 be translated (so the implied pronoun and expressed referent agree)?

English translations usually render this in a way that makes this about the commencement of both the rule of God and of the messiah and yet they use a singular pronoun to refer to both: "and he shall reign forever and ever". The NIV is typical in this regard:

New International Version The seventh angel sounded his trumpet, and there were loud voices in heaven, which said: "The kingdom of the world has become the kingdom of our Lord and of his Messiah, and he will reign for ever and ever."

While this is perfectly acceptable (and even highly desirable) Trinitarian Greek grammar it is horrible Koine grammar. How would someone render this passage into Koine? And how should it be properly understood?

Disclaimer: I have no formal education in Koine.

This is how I would translate it. Is this legitimate Koine?:

And the seventh angel sounded his horn and there were loud voices in the sky saying "The reign of our LORD over the world and over his Christ has begun and he will rule for ever and ever".

Is this not better koine since the pronoun and its referent agree?

Since Jesus hands over the kingdom to God the Father, in what way will he reign forever and ever? (1 Corinthians 15:24-26)

Translation
In his commentary Henry Alford gives this analysis (his emphasis):

The Kingdom of the world (i.e. over this world: ἡ βασιλεία abstract. In the received text, reading αἱ βασιλεῖαι, it is the kingdoms, concrete, of the world) is become (aor., but alluding to the result of the whole series of events past, and not to be expressed in English except by a perfect) our Lord’s and of His Christ (no supply such as “the Kingdom,” is required: nor is this the case even in the rec. text. The gen. in both cases is one merely of possession), and He (no emphasis on He, as we are almost sure to lay on it, perhaps from the accent unavoidable in the Hallelujah Chorus of Handel) shall reign to the ages of the ages (this announcement necessarily belongs to the time close on the millennial reign: and this is no more than we might expect from the declaration of the strong angel in ch. X. 7) 1

Charles Ellicott adds to Alford's observations stating the Greek does not support placing emphasis on the pronoun "He" in "reigns:"

...our familiarity with the “Hallelujah Chorus” tempted us to put an emphasis on the word He which is not sanctioned by the Greek; it is the reign of the Lord which is the prominent thought. 2

Perhaps the best way to achieve the proper understanding is to remove “He" which may be implied but is not present:

The kingdom (βασιλεία) of the world is become our Lord’s and of His Christ and shall reign (βασιλεύσει) to the ages of ages.

βασιλεία is "not to be confused with an actual kingdom but rather the right or authority to rule over a kingdom." 3 In other words, it is the kingship (βασιλεία) being celebrated by the voices and the implication is there is a coregency of "our Lord and His anointed (see below)."

Understanding
Heavenly speaking (voices) after the seventh trumpet follows the pattern of the seals and bowls:

When the Lamb opened the seventh seal, there was silence in heaven for about half an hour. (8:1) [ESV]

Then the seventh angel blew his trumpet, and there were loud voices in heaven, saying… (11:15)

The seventh angel poured out his bowl into the air, and a loud voice came out of the temple, from the throne, saying, “It is done!” (16:7)

After the many voices make their proclamation additional speaking follows:

And the twenty-four elders who sit on their thrones before God fell on their faces and worshiped God, saying... (11:16-17)

This is the sequence of speaking after a seventh item:

What is said should be considered in light of who is speaking and what they are doing, but the identity of the many voices is not given. Whether the 24 elders were included is not stated (seemingly they are not as speaking appears to always be attributed to a source). Regardless, before speaking, the 24 elders get off their thrones and are never again described as sitting on or having thrones.

This is particularly relevant in context: following the many voices celebrating the reign in verse 15, the 24-elders leave their thrones (θρόνους). And they remain off for the remainder of the book. Thus, after the seventh item, John has also described a progression involving thrones:

When the 24 elders leave their thrones, they direct their message to a single entity:

...“We give thanks to you, Lord God Almighty, who is and who was, for you have taken your great power and begun to reign. The nations raged, but your wrath came, and the time for the dead to be judged, and for rewarding your servants, the prophets and saints, and those who fear your name, both small and great, and for destroying the destroyers of the earth.” (11:17-18)

Therefore, in terms of the reign (v. 15), "our Lord" is referring to Jesus The Christ (as everywhere else in the New Testament) and His "christ" or anointed, would be King David.

The many voices should be understood as acknowledging the fulfillment of the Davidic covenant with coregents:

The kingdom of the world is become our Lord’s [Jesus Christ] and of His anointed/christ [King David] and shall reign to the ages of ages.

Thus both the pattern and type of King David's final reign mirrors its beginning:

Psalm 2
The LXX rendering of Psalm 2 has the nearly identical phrase "the Lord and his anointed" and some versions include the superscription (absent in the MT) stating it is a Psalm to David:

A psalm to David. Why did nations neigh, and peoples meditate upon vain things? The kings of the earth stood by, and the rulers gathered together against the Lord and against his anointed. (Psalm 2:1-2 ABP)

The only difference is the voices in Revelation call "the Lord", "the Lord of ours."

The ABP also has a textual variant from the NU and M text at verse 11:17:

The phrase "ο ων και ο ην και ο ερχόμενος" is a clear connection to Jesus (cf. Revelation 1:4, 1:8, and 4:8) and some manuscripts were made to make the connection between the Lord God Almighty (v. 17) and Jesus clearer.

Revelation 11:15
Here is what I get from the Greek:

Then the seventh angel sounded and loud voices arose in heaven, saying, "The realm of the world has been made that of our Lord and of his Christ, and he shall reign forever and ever." 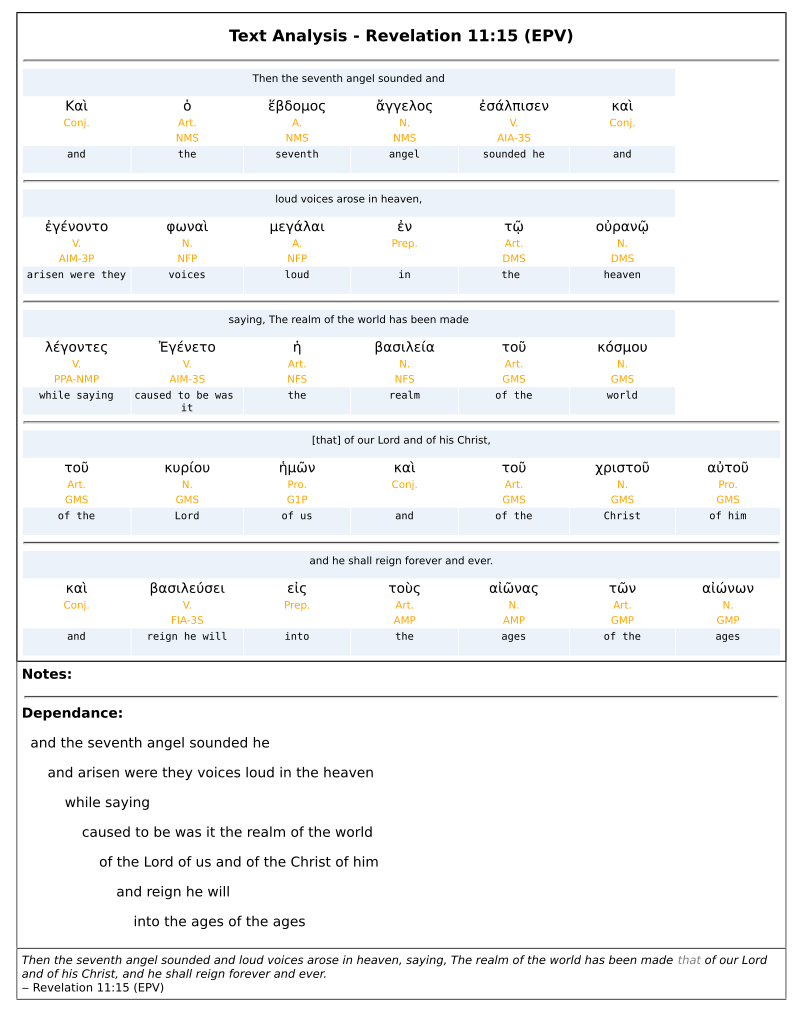 The KJV has "The kingdoms of this world are become" for Ἐγένετο ἡ βασιλεία τοῦ κόσμου, but βασιλεία is singular and Ἐγένετο is causal. So I have given "The realm of the world has been made" to better reflect what I see in the Greek.

τοῦ κυρίου ἡμῶν καὶ τοῦ χριστοῦ is a genitive expression, which Corey Keating categorises as the "Possessive Genitive", since the "of" can be replaced by "belonging to". Hence the use of "that" in the translation of Revelation 11:15 above, to more clearly connect "the owned" with "the owner".

Now, to address the OPs problem regarding the "he" of Revelation 11:15, consider this: there are only two places in the NT where the expression καὶ βασιλεύσει occurs, here in Revelation 11:15 and the words of the angel to Mary in the Gospel of Luke:

30And the angel said unto her, Fear not, Mary: for thou hast found favour with God. 31And, behold, thou shalt conceive in thy womb, and bring forth a son, and shalt call his name JESUS. 32He shall be great, and shall be called the Son of the Highest: and the Lord God shall give unto him the throne of his father David: 33And he shall reign καὶ βασιλεύσει over the house of Jacob for ever; and of his kingdom there shall be no end.
-- Luke 1:30-33 (KJV)

John was likely never privy to the Gospel of Luke, but readers of today are, so it can be used to clear up any ambiguity they might find in John's words of Revelation 11:15.

Given that John has made no attempt to identify clearly who "he" refers to (for readers many, many centuries later), then it can be safely assumed that at the time it was obvious to those for whom Greek was a natural language, "he" was unambiguously a reference to the Lord's Christ, i.e. the manifestation of God in the flesh whose name was called Jesus.

6For unto us a child is born, unto us a son is given: and the government shall be upon his shoulder: and his name shall be called Wonderful, Counsellor, The mighty God, The everlasting Father, The Prince of Peace. 7Of the increase of his government and peace there shall be no end, upon the throne of David, and upon his kingdom, to order it, and to establish it with judgment and with justice from henceforth even for ever. The zeal of the LORD of hosts will perform this.
-- Isaiah 9:6-7 (KJV)

Revelation 11:15 records that loud voices arose in heaven. Well, they are surely celebrating the fulfillment of this, and the zeal of the LORD has brought it about. If the LORD and all the host of heaven is rejoicing, then so too will all the world whose hearts are pleased by what pleases Him.

1
Does Christ return to Heaven after the thousand year reign, and then return to earth after the seventh trumpet?
6
Is the "7th seal" opened before the "6th seal" book of Revelation
2
In the book of revelation does the seventh trumpet sound before or after the seven bowls of wrath?
9
Acts 4:26, isn't the Christ himself the Lord?
1
Is Matthew 11:12 stating kingdom of heaven is associated with exciting and meaningful eventfulness?
3
In Revelation 5:13, how should πᾶν κτίσμα be understood?
3
Reconciling Revelation 13 with Revelation 11
3
Who are the people who destroy the earth in the last days and what might they be doing? Rev. 11:18
3
Eph 5:5 and Sharps' Rule