Does a wasted, formless and void earth in Gen. 1:2 imply a previously existing world?

"23 I looked [to] the land, and lo, waste and void, And unto the heavens, and their light is not.

24 I have looked [to] the mountains, And lo, they are trembling. And all the hills moved themselves lightly.

25 I have looked, and lo, man is not, And all fowls of the heavens have fled.

26 I have looked, and lo, The fruitful place [is] a wilderness, And all its cities have been broken down, Because of Jehovah, Because of the fierceness of His anger." (YLT)

Jeremiah's prophesy was forward looking to a wasted destruction after God's judgment upon Jerusalem.

Does the same language in Gen. 1:2 imply that God had previously destroyed another existing world, which became then void and without form? As the destruction of Jerusalem left a waste and void land, then does the Genesis account begin with a previously destroyed earth?

The way I see it, Jeremiah is saying here (and perhaps exaggerating a bit) that God will utterly destroy the land and strip it bare that the land will return to its original primordial state--formless and void, the way it was prior to creation. More importantly the land will be utterly destroyed that it will leave no trace of its previous habitable state.

This motif is found elsewhere in the biblical prophetic literature,

Let her remove the adulterous look from her face     and the unfaithfulness from between her breasts. Otherwise I will strip her naked     and make her as bare as on the day she was born; I will make her like a desert,     turn her into a parched land,     and slay her with thirst. (Hosea 2:2-4 NIV)

There is simply no basis for interpreting the second verse of Gen. as God creating the world from a previously destroyed world. As we have seen the passage in Jeremiah does not in any way prove that whenever we find the expression formless and void that it implies a previously existing world. Such a preposterous conclusion is entirely speculative and unsupported from the bible. The simplest reading of the beginning verses of Genesis is that God formed the world from a pre-existing primordial formless landmass into an habitable place for humans and animals. Indeed such an account of creation was widespread and common in ANE cosmogonies, and there is good reason to believe that the bible pursued this belief rather than the belief in creatio ex nihilo,

Nearly every surviving creation account from Egypt, for example, presents an original preexisting state of darkness, watery chaos, and a yet unformed landmass prior to creation. This is especially so in the case of the Egyptian cosmogony from Hermopolis, whose primordial state prior to creation is near identical to that presented in Genesis 1:2. Personified as preexisting gods, this particular cosmogony speaks of a primeval darkness, a primordial formless earth mass or hill, and the primordial surging waters, through whose separation the earth and heavens were formed and named...

The author then goes on to deal with the contentious text in Jeremiah,

The rare Hebrew expression tohû wabohû or tohû alone and the image it invoked were unique to the literature of the 6th century BCE. That is we find the same image in other texts from the 6th century BCE and specifically to depict the historical crisis so often referred to in these texts. Paying attention to these textual details allows us to see more clearly what the author of Genesis 1:1-2:3 hoped to convey through his creation account, and more importantly to whom! So, foreseeing the imminent doom of Judah by the Babylonians in the earlier 6th century BCE and the coming desolation of the land and the turning of fruitful fields into wildernesses, Jeremiah professes: I looked on the earth and behold, it was formless and desolate (tohû wabohû), and to the heavens, and they had no light (Jer 4:23). The image conveyed here is remarkably similar, if not exact, to that of Genesis 1:2: the earth is in a condition of formlessness and desolation—the exact same condition as depicted in Genesis, tohû wabohû—and darkness prevails. Is this a vision of the primordial state of creation as depicted in Genesis 1:2? Not quite. But the prophet does borrow the image to depict the harsh realities and outcome of the Babylonian destruction of the land of Judah and its people in 587 BCE. In other words, the language and image that Jeremiah and other exilic writers of the 6th century used to portray the utter annihilation of the land of Judah at the hands of the Babylonians, who decimated its land, burnt Jerusalem and Yahweh’s temple down to the ground, and left the land barren and covered in ashes, was the same language and image used to describe the preexistent state of creation—tohû wabohû.

I admit that this subject is too broad for me to attempt to prove, in this small post, that this was indeed the intention of the biblical authors when they wrote the beginning verse of Genesis. I'm merely pointing out that Jeremiah 4:23 cannot in this case settle the ongoing dispute between the biblical scholars.

There appears to have been a pre-existing earth prior to Genesis 1:2 for two reasons:

The Masoretic Text also connects the "waste and void" from Genesis 1 to Jeremiah 4. The following image comes from the first folio (page) of Scripture from the Leningrad Codex, which begins the Book of Genesis. 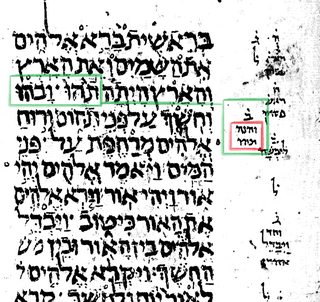 The green box on the left is the phrase "waste and void" and the green box on the right is the margin note that this phrase occurs two times in Scripture. The box in red are the two Hebrew words "lo, waste," which come from the judgment passage of Jeremiah 4:23, since the only place in Hebrew Scripture where those two words occur together was Jeremiah 4:23, which we can verify with modern Bible software. (The Masoretic editors had no system of writing Bible verses as abbreviations the way we do today, and so they used short phrases that only the most erudite scholars would identify and understand in their day.) What is very unusual here is that the Masoretic editors rarely, if ever, annotated the corresponding verses in the side margins of the codex (where there was little space), but instead made their verse notations at the top and bottom margins (and appendix) of the codex. What this tells us is that the editors placed an emphasis on this correlation that the "waste and void" in Genesis 1 was parallel to the "waste and void" in Jeremiah 4, which speaks of the divine judgment of the land. As noted in another post, the Masoretic editors never correlated words with other words when the meanings were different (notwithstanding that the vowel points and letters could be the same). So the Masoretic editors saw something bad between Genesis 1:1 and Genesis 1:2, since the same phrase in Jeremiah 4 was bad (divine judgment on the Land of Israel).

4 and saying, “Where is the promise of His coming? For ever since the fathers fell asleep, all continues just as it was from the beginning of creation.” 5 For when they maintain this, it escapes their notice that by the word of God the heavens existed long ago and the earth was formed out of water and by water (Genesis 1), 6 through which the world at that time was destroyed, being flooded with water (Genesis 6). 7 But by His word the present heavens and earth are being reserved for fire, kept for the day of judgment and destruction of ungodly men (eschatological end of the world).

Peter describes all three together in the context of judgment. In other words, there is the suggestion of a pre-existing world, which was created in Genesis 1:1. At Genesis 1:2 this pre-existing world was destroyed and the world formed out of water, and so the subsequent seven days of creation became, then, a re-creating of the world for habitation by men and other animals. The Sabbath Rest on the seventh day followed, which would be re-inaugurated later when Egypt was judged and Israel was saved at the Exodus. So here we see the idea of the Sabbath Rest as something that follows divine judgment and the salvation that follows.

The above discussion above provides pause for consideration that there was a pre-existing earth that was judged between Genesis 1:1 and Genesis 1:2. This divine judgment implies therefore a pre-historic earth had existed at that time, which was first created when God created the heavens and the earth in Genesis 1:1.

If the proper translation is "became without form, and void", then something must have happened between Verse 1 and Verse 2 which rendered the earth formless and void. Conjecturing, Lucifer's attempt to ascend to God's throne, along with one third of the angels who followed him, to dethrone God, resulted in a cataclysmic which did a lot of celestial damage, including the earth and primitive life forms that were extant at that time.

Not the answer you're looking for? Browse other questions tagged creation jeremiah or ask your own question.

9
What does it mean in Genesis 1:2 and Jeremiah 4:23 when they refer to the earth as void?
5
Do the 'sevens' in Daniel 9:24-26 refer to years in a land sabbath cycle?
2
Are the 70 weeks of Daniel and Jeremiah prophecies about the Babylonian exile of the 6th century BC or about the age of the Messiah?
4
Sky and Land vs Heaven and Earth in Gen 1:1
3
Why in Gen 1:2 does God create an earth that is "without form and void" with darkness, when that is so different than God's character?
2
Is this a valid interpretation of Genesis 1:1-3?
4
Why is Jeremiah so opposed to a Jewish settlement in Egypt?