In Acts 15:19-20, James renders his judgment on the matter of the Gentiles that Peter has brought before the Jerusalem council:

It is my judgment, therefore, that we should not make it difficult for the Gentiles who are turning to God. Instead we should write to them, telling them to abstain from food polluted by idols, from sexual immorality, from the meat of strangled animals and from blood. For the law of Moses has been preached in every city from the earliest times and is read in the synagogues on every Sabbath.

What associations would the word ἀλισγημάτων (translated here as "polluted") have evoked in a first century context? When I hear "polluted" I think of smoke stacks or oil spills or scattered plastics and the like—none of which I imagine would have come to mind of the original audience.

Reading with a modern lens, it would seem "polluted" it used metaphorically here in describing the effects of idols, but for a metaphor to work it has to refer to something concrete. Is "polluted" a good translation choice here for that concrete reality? And what would the word ἀλισγημάτων have brought to mind in its original context?

BDAG points out that it derives from "to make ceremonially impure":

Paul provides somewhat of a treatise on the subject in 1 Corinthians 10:

Paul seems to be saying that eating foods offered to idols is a "partaking" of the idol and thus a form of idolatry. However, he also fields the objection that there ARE no other gods! He says that it is fine that the Corinthians are clever enough to realize that but they must take into account the consciences of those who do not have that knowledge and to abstain from eating if their consciences are bothered by the liberty of the Corinthians.

James, the Lord's brother (who seems to have eclipsed the apostle of the same name) may have had a "weaker conscience" per Paul or his mention of the prevalence of the teaching of the Torah may indicate that he had in mind the consciences of others ala Paul.

Reading down some verses, the actual content of James' letter is given:

For it seemed good to the Holy Spirit and to us, no greater burden be added to you except these necessary things: to keep away from things offered to idols, and blood, and things strangled, and fornication. By keeping yourselves from such things you will do well. Farewell.
-- Acts 15:28-29 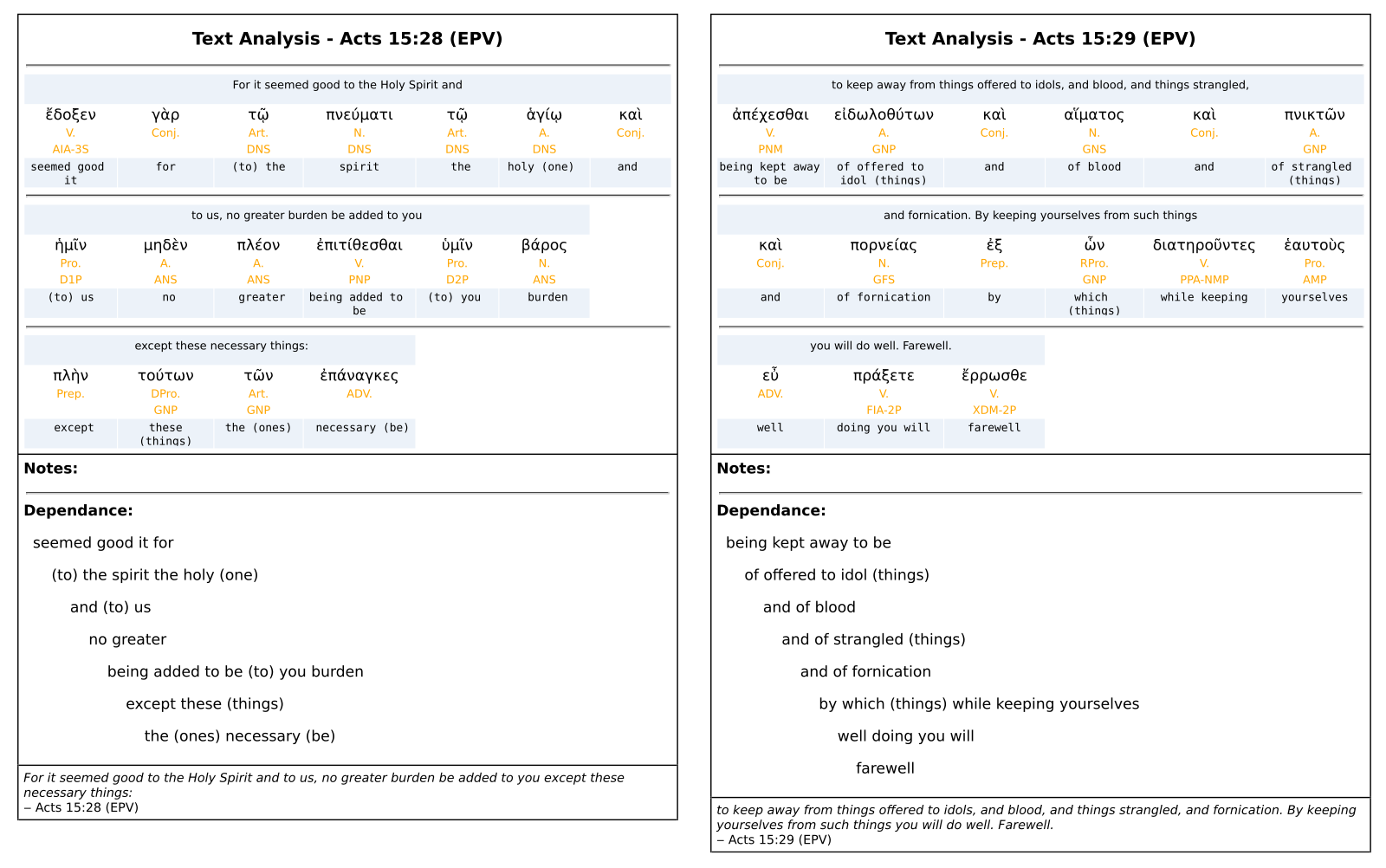 So, it becomes clear that the "pollutions of idols" of Acts 20:22 that concerned James, was εἰδωλόθυτος (Strong's G1494 - eidōlothytos, i.e sacrificed to idols, the flesh left over from the heathen sacrifices)

ἀλισγημάτων, given as "pollutions" in Acts 22:20, is the plural of ἀλίσγημα (Strong's G234 - alisgēma), which is the only occurrence in the NT. However, there are two instances in the LXX of a related verb ἀλισγέω, which means: to pollute, destroy the purity of, destroy the sanctity of:

And Daniel purposed in his heart, that he would not defile himself ἀλισγηθῇ with the king's table, nor with the wine of his drink: and he intreated the chief of the eunuchs that he might not defile himself.
-- Daniel 1:8 (Brenton LXX)

The life of him that dependeth on another man's table is not to be counted for a life; for he polluteth himself αλισγησει ψυχην αυτου with other men's meat: but a wise man well nurtured will beware thereof.
-- Sirach 40:29 (Brenton LXX)

It is interesting to note that Brenton chose "defile himself" for the verb in Daniel 1:8, but "polluteth himself" in Sirach 40:29. It is unlikely this was unintentional. Daniel was a son of Israel, and one of his great concerns was ritual purity. The wisdom being shared in Sirach, on the other hand, is generic (no mention of idols, only "other men's meat"), and is applicable advice for all men, even those who have no concern with ritual purity.

James is writing on behalf of the Apostles to advise the "Gentiles" of the essentials of the Law that would be pertinent to their lives, and even though he mentions idols, his concern is not with ritual purity, but their good health. The final salutation in the letter is ἔρρωσθε (Strong's G4517 - rhōnnymi: "farewell"), which could just as easily been given as "Good health!"

James is apologetic in his letter:

Forasmuch as we have heard, that certain which went out from us have troubled you with words, subverting your souls, saying, Ye must be circumcised, and keep the law: to whom we gave no such commandment:
-- Acts 15:24 (KJV)

So James' mind clearly could not have been fixed on the ritual aspects of the Law, but rather on those aspects that were relevant to lives of the Gentile believers, i.e. their good health.

ἀλισγημάτων could be given in Acts 22:20 as either "pollutions" or "defilements", but since James' target audience is Gentile, and his intent is not religious in nature, one might just as well follow Brenton's lead and give it as "pollutions".

Not the answer you're looking for? Browse other questions tagged greek acts history or ask your own question.