Who all is an idolater according to Ephesians 5:5?

For of this you can be sure: No immoral, impure or greedy person—such a person is an idolater—has any inheritance in the kingdom of Christ and of God.

On initially reading this I thought I must be reading a new translation because I was sure the text attached idolatry to greedy more explicitly. The way NIV renders "person" here twice made me read it differently. It appears that I was thinking of Colossians 3:5.

Harold Hoehner says "The relative pronoun refers the reader back to the greedy person and not to all three of the preceding persons; the singular points to this."1 But the verb of the sentence (i.e. "has") is also singular, so I don't understand the force of the argument.

Does the parenthetical remark attach only to the greedy person or does it attach to an immoral or impure person as well?

Assuming shared authorship, the parallel in Colossians makes a good argument for preferring the former. But in particular I'm interested if the meaning of the Ephesians verse can be decided without recourse to the Colossians passage.

Greeks in antiquity who read and wrote on this passage understood who is an idolater (ὅς ἐστιν εἰδωλολάτρης) to relate to greedy person - rendered as the single word πλεονέκτης (pleonektēs).

There were, it is likely, in the time of our forefathers also, some who weakened the hands of the people [Jer 38:4], and brought into practice that which is mentioned by Ezekiel, or rather who did the works of the false prophets, who profaned God among His people for handfuls of barley [13:19]; a thing, by the way, done methinks by some even at this day. When, for example, we say that he who calleth his brother a fool shall depart into hell-fire, others say, “What? Is he that calls his brother a fool to depart into hell-fire? Impossible,” say they. And again, when we say that “the covetous man is an idolater,” in this too again they make abatements, and say the expression is hyperbolical.

"And why should a man be called an idolater just because he is greedy?" This is what the Apostle is suggesting.*

* Explanation of the Epistle of Saint Paul to the Ephesians (tr. from Greek, Chrysostom Press, 2013), p.74

Ephesians 5:5
This is how I see the Greek:

Therefore be resolved knowing this, that any fornicator or foul person or coveter (who is an idolater), has no inheritance in the kingdom of Christ and God. 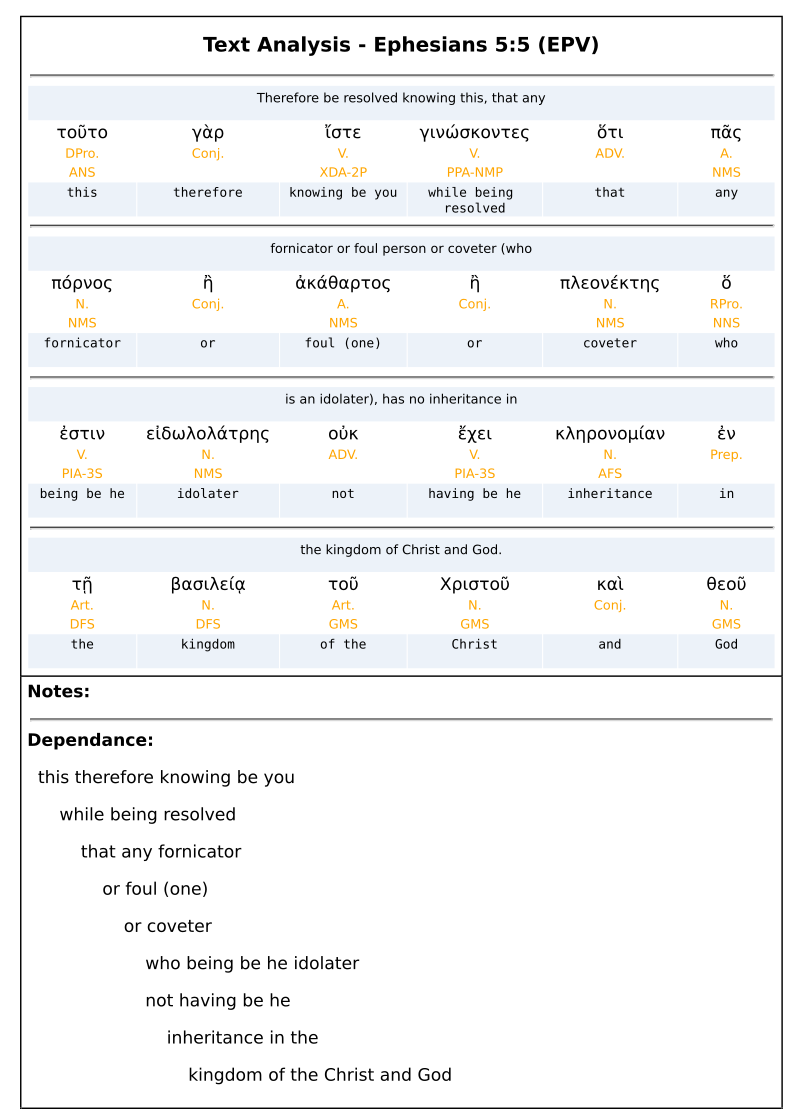 Ellipsis 1 is a practice common to many languages, and it is apparent in this verse:

Therefore be resolved knowing this, that has no inheritance in the kingdom of Christ and God.

The "anys" don't have to be included for them to be understood, though Paul might have chosen to insert them had he wanted to emphasise each and every item.

Now it defies the nature of listening certainly, and reading somewhat, for ὅ ἐστιν εἰδωλολάτρης to be considered in the same way. There would need to be something in the text that would draw the listener's/reader's attention to it. For example, if Paul had wanted each of these types of people to be considered "idolaters", he could have used the plural εἰδωλολάτραι (idolaters) instead of the singular εἰδωλολάτρης.

In the absence of any such clue in the text, one can be pretty-well certain that "who is an idolater" belongs only to the last item in the list, "coveter".

Not the answer you're looking for? Browse other questions tagged referent-identification ephesians or ask your own question.