Were the Pharisees baptized by John?

7 But when he saw many of the Pharisees and Sadducees coming for baptism, he said to them, “You brood of vipers, who warned you to flee from the wrath to come? 8 Therefore bear fruit in keeping with repentance; 9 and do not suppose that you can say to yourselves, ‘We have Abraham for our father’; for I say to you that from these stones God is able to raise up children to Abraham. 10 The axe is already laid at the root of the trees; therefore every tree that does not bear good fruit is cut down and thrown into the fire.

11 “As for me, I baptize you [a]with water for repentance, but He who is coming after me is mightier than I, and I am not fit to remove His sandals; He will baptize you [b]with the Holy Spirit and fire

The above text seems to allude to John's baptism.

But in Luke it seems to say something different

Did John actually baptize the Pharisees?

Matthew 3:7
Here's what I get from the Greek:

But, seeing many of those of the Pharisees and Sadducees being brought to his baptism, he said to them, Spawn of vipers! What convinced you to escape from the coming wrath? 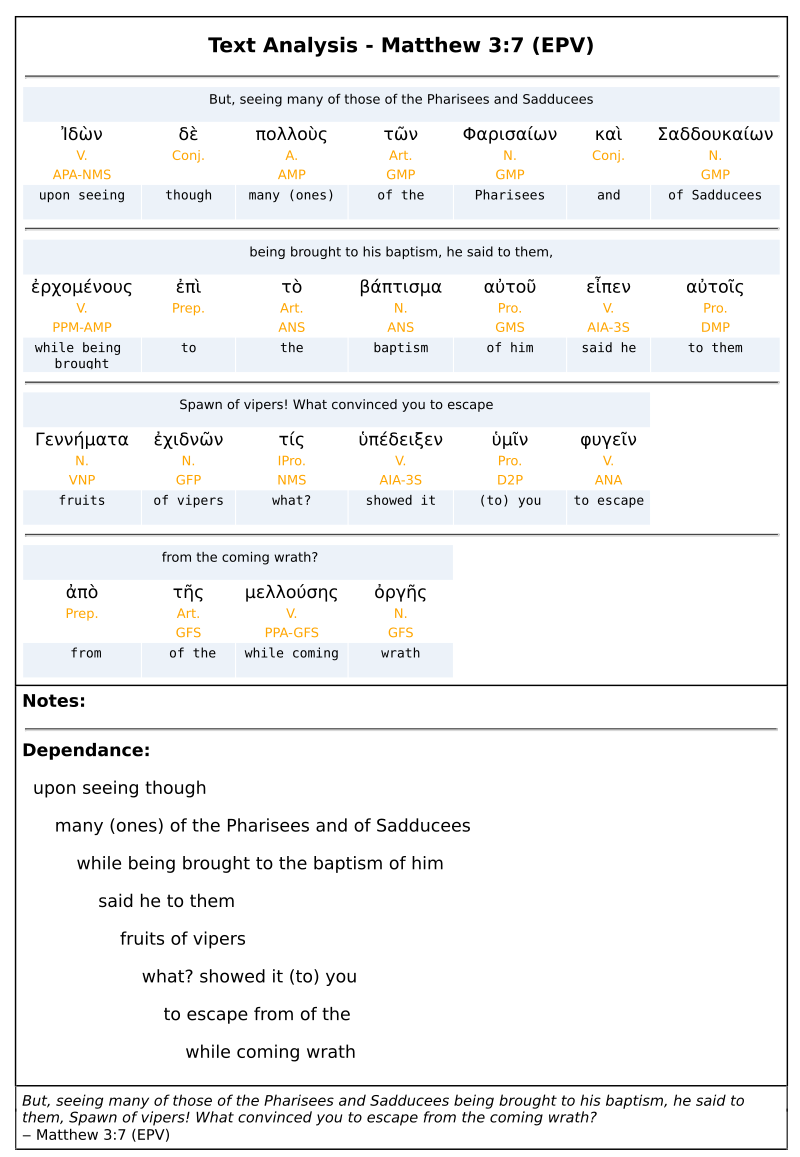 ἐρχομένους is a unique conjugation of the verb ἔρχομαι (Strong's G2064 - erchomai), and I have given "while being brought" because "bring" appears in Strong's list of the "great variety of applications, literally and figuratively)", and a similar conjugation (present ... middle/passive) appears in Mark 4:21, which most of the versions render as "brought".

The Pharisees and Sadducees weren't coming to be baptized, they were being brought along to check out what John was up to, and John's invective directed at them borders on sarcasm, if not crossing the line altogether.

I believe the King James and Young's Literal versions are more clear.

But when he saw many of the Pharisees and Sadducees come to his baptism, he said unto them, O generation of vipers, who hath warned you to flee from the wrath to come?

So, the context supports Luke 7:30; they came but were not baptized.

No, the Pharisees and scribes were not baptized (immersed) by John.

"7 And having seen many of the Pharisees and Sadducees coming about his baptism, he said to them, `Brood of vipers! who did shew you to flee from the coming wrath?

9 and do not think to say in yourselves, A father we have -- Abraham, for I say to you, that God is able out of these stones to raise children to Abraham,

10 and now also, the axe unto the root of the trees is laid, every tree therefore not bearing good fruit is hewn down, and to fire is cast.

11 `I indeed do baptize you with water to reformation, but he who after me is coming is mightier than I, of whom I am not worthy to bear the sandals, he shall baptize you with the Holy Spirit and with fire,

12 whose fan [is] in his hand, and he will thoroughly cleanse his floor, and will gather his wheat to the storehouse, but the chaff he will burn with fire unquenchable.'"

There exists a great deal of confusion over these verses for a couple of reasons: the misunderstandings taught about Acts 2:38-39, and because of a lack of understanding of the judgment language surrounding the word "fire".

The "you" in verse 11 collectively addressed the crowd who were all standing before John, and witnessing the immersions (baptisms) he performed in the Jordan river. Vs. 7 explains that the Pharisees came to look at what John was doing. They wanted to see it for themselves.

In their world, during the second temple period, if any teacher went against the Torah as interpreted by the Sadducee elders and the Sanhedrin, the "false" teacher was usually / eventually brought before the "bench" or court for inquiry. If the Sanhedrin found the false teacher guilty of transgressing the teaching of the "Law", then they were put through a process which could first result in a short period of excommunication of a day or 30 days. If the transgressor did not make the proper sacrifice / payment of fine, or if the "sin" was grave enough then the sentence of excommunication would become "anathema" / accursed for a lifetime. See: here and here.

The anathematized were considered spiritually dead to the congregation. They were ostracized completely, put out of the synagogue and out of the market place. They could not make a living, sell anything, or buy anything from even their family. The full anathema could and often did result in physical death.

36 and the enemies of a man are those of his household." (YLT)

With this background, we can then see why the Pharisees and scribes were inspecting John. They were unbelievers, whom John called "vipers" in Matt. 3:7, and who put all of their trust in their lineage to Abraham (Matt. 3:9).

Whereas John could and would immerse them in the water (baptize) if they were believers, he was promising them the alternative of the judgment of Christ because they were unbelievers. Matt. 3:10-12 spelled out the consequences of their unbelief. As such, John was not speaking of water baptism (immersion) for their salvation, but of immersion into the fire of God's judgment which was promised to be poured out from the Holy Spirit and Christ upon those wicked of that generation (Matt. 12:41; 23:36; 24:34) of the 1st century AD, which judgment was fulfilled at the destruction of the temple in AD 70.

The baptism of that judgment would have been more evident if the Greek word "batizo" (Strong's Gr. 907) had been correctly translated as immersed, dipped under, submerged.

The transliteration of that word into the English translations causes much confusion. John was promising them immersion into God's destructive fire and judgment. He was using the figurative judgment language of OT prophesy. He was not promising them salvation.

For more discussion of the judgment language of the OT see my posts "It's Not The End of The World" Parts III & IV at my site: ShreddingTheVeil. See also Part VIII for more discussion from the scriptures on the pouring out of the Holy Spirit.

Bold emphasis is mine.

But the Pharisees and experts in the law refused to accept God's plan for themselves; they did not let John baptize them.

John came showing you the right way to live, and you did not believe him. But the tax collectors and prostitutes believed John. You saw that happening, but you would not change. You still refused to believe him.

Not the answer you're looking for? Browse other questions tagged matthew luke john-the-baptist or ask your own question.

9
Was John the Baptist confused or mistaken about the nature of Jesus' ministry?
6
What was the historical and cultural context of baptism in the time of Christ?
13
Why was Jesus baptized?
2
In Romans 11:28 to whom does Paul refer when he speaks of elect Jews who are enemies of the gospel?
2
Per Mark 1:4, Luke 3:3 why did John the Baptist preach the "baptism of repentance" and not "repent" for the forgivness of sin?
3
How did baptism by John help the people and the tax collectors recognize God's justice in Jesus' response to John's doubt about Jesus' identity?
2
Why did John the Baptist's Ephesian disciples (Acts 19:1-3), not listed as his disciples (Mat 3:5), say John never mentioned Holy Spirit (Mat 3:11)?
3
What does the image of burning up the chaff in Matthew 3:12 convey?