Isaiah 44:6 Thus said Jehovah, king of Israel, And his Redeemer, Jehovah of Hosts: `I [am] the first, and I the last, And besides Me there is no God. (Young's Literal Translation)

In this verse, the redeemer is called Jehovah. Who/what does the "his" refer to?

The Hebrew of the verse is as follows:

The word in question is וגאלו (w'galow) and is composed of the root verb גאל (gaal), meaning to redeem, with a beginning prefixed vav (ו), which is the standard conjunction meaning 'and,' but which functions various ways, including even 'but;' here, it functions appositionally (elaborating upon or defining the previously mentioned noun). Then the suffixed vav (ו) signifies 'of him.' So the one word means 'and [the] redeeming [i.e. redeemer] of him,' that is, 'and his redeemer,' or 'even his redeemer.' The object Israel is the referent of the possessive 'of him,' meaning The "Redemer" of Israel is a description of "the Lord" and "King" mentioned before.

Sometimes the literal translation can obscure the meaning by giving false impressions. We might translate this better to understand what the sense is, namely:

Thus says the Lord, King of Israel: his redeemer, the Lord of hosts: "I am the first and the last; apart from me there is no God."

As a Christian who believes that Jesus is the Lord God (YHVH) in the flesh, and the Redeemer, this passage is not attempting to identify a certain Redeemer as distinct from the Lord (the Lord and his friend the Lord of hosts), but that the Lord (of Hosts) is the Redeemer of Israel.

Thus says the LORD, the king of Israel (and his redeemer) -- the LORD of hosts, I am the first and I am the last, and no God is, besides. 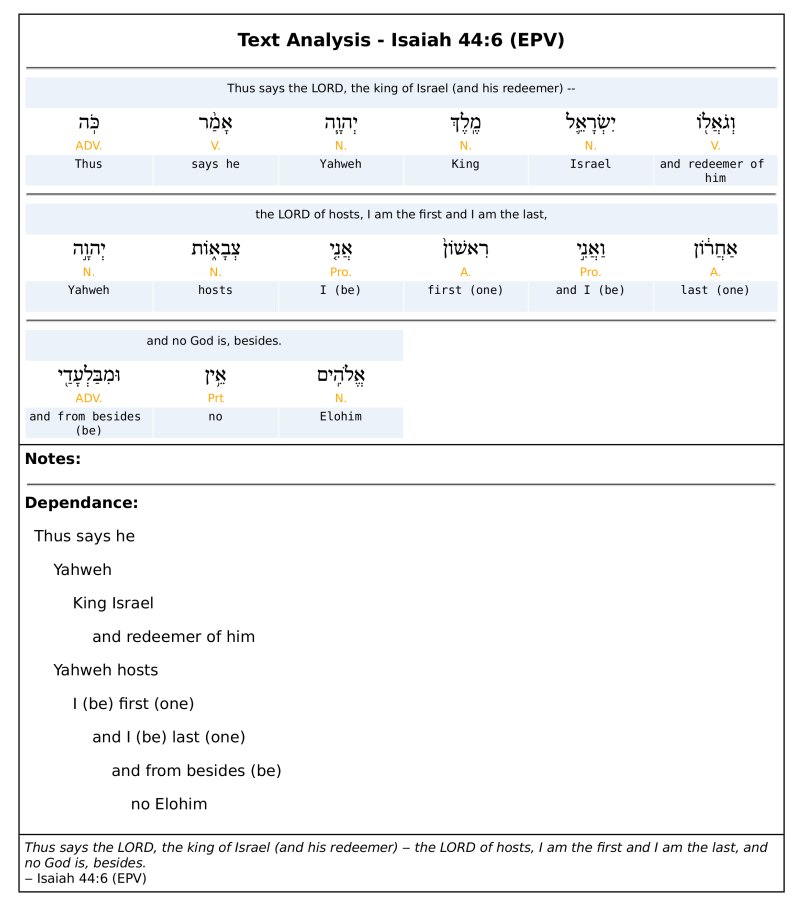 Just like verse 2, this could have been declared simply:

However, Jacob my servant and Israel whom I have chosen, it's not just the LORD speaking to you, it is the LORD of heaven's armies:

And no God exists, besides!

The LORD is referring only to himself in this verse.

15
What does "Jealous" mean in Exodus 34:14?
10
What did Isaiah intend with his unusual usage of "create" in Isaiah 45:7?
11
To whom does El-Gibbor refer in Isaiah 9?
3
Isaiah 7:15: to whom does this verse refer?
14
Does Isaiah 7:14 refer to a virgin?
3
In Isaiah 49 is the servant the messiah or is he Israel?
2
In Isaiah 44:6, to whom is the second usage of the word Lord referring?
3
Does the Sixth Seal in Revelation 6:12 refer to the Medo-Persian Empire?
2
Other Lords besides God? Does this contradict the first commandment?
5
Is the expression "I am the First and the Last" always about generations?