A use of the masculine pronoun (ὅς) would have been a reference back to "the Father" (τῷ πατρί) immediately preceding as the antecedent. But Jesus is not wanting to say the Samaritans worship the Father who they do not know.

Rather, he is trying to point out that they are caught up in worshiping something else entirely—a false idea, a concept of a god, not the true God. So they themselves do not really have a knowledge of what they are worshiping (which is true of all false religions), and hence the neuter relative pronoun.

Most likely Jesus continues using the neuter when describing what "we" (the Jews) worship for two reasons:

That some false conceptions are a focus can be found as well in some commentaries (though these do not necessarily mention the neuter):

Jesus did not leave the woman with a vague witness about God. He pushed her to think about the personal God who acts in history. First, he called her to an eschatological reality (the coming hour) that would affect all worship (4:21). Because God has acted primarily through people in the world, he is not basically building-oriented. The mention of “hour” here is a Johannine theme that encapsulates the decisive moment in history of the crucifixion and resurrection that transformed and continues to transform human reality. Second, Jesus reminded her that salvation is directly related to God’s working in history (4:22). The issue was not a matter of national or tribal pride. That was the woman’s perspective on God and religion. ... The issue, however, was understanding how God had chosen to reveal the divine purpose in history. (Gerald L. Borchert, John 1–11. Vol. 25A. The New American Commentary. Nashville: Broadman & Holman Publishers, 1996.)

Jesus now responded directly to the implied question in 4:20: You Samaritans worship what you do not know; we worship what we do know, for salvation is from the Jews. The plural forms used by Jesus (‘you Samaritans’ and ‘we [Jews]’) show that his remarks related to the Samaritan people and the Jewish people in the same way as the implied question of the woman did. Jesus insisted that Samaritan worship on Mount Gerizim was worship based upon ignorance. Jewish worship in Jerusalem was based on knowledge because it was in line with the revelation of God to his people. They worshipped at the place God himself had chosen. Jesus also insisted that God’s purposes for salvation were being worked out through the Jewish people, not the Samaritans. No matter how much grace Jesus was to show to the Samaritan woman, it would not be at the expense of truth. (Colin G. Kruse, John: An Introduction and Commentary. Vol. 4. Tyndale New Testament Commentaries. Downers Grove, IL: InterVarsity Press, 2003.)

One older commentary that does address the neuter more specifically, also giving a summary of various interpreters views (bolding and italics original to commentary):

Ye worship that which ye know not.—The question concerning the where of worship could be resolved only by the what, and this again by the how. The neuter instead of whom is significant. Just because God is not truly known to them, He is a ὅ rather than a ὅς, more impersonal than personal. Meyer supposes that the neuter denotes God in His essence and substance; Lücke, that it denotes τὰ τοῦ θεοῦ, which does not suit the term προσκυνεῖν. De Wette: “O refers to the act of προσκυνεῖν; ye worship, and therein do what ye know not. Brückner objects to the correctness of the sentence, that the Samaritans were monotheists. But there are different monotheisms. Tittmann and others explain: Pro vestra ignorantia. Tholuck (after Lücke): “The true knowledge is that which is shaped by the history of redemption; and the Samaritans who were limited to the Pentateuch for their sacred books, knew Jehovah, that is, the historical God of Israel, but partially.” As a whole, in a living growth of knowledge, they almost knew Him not. This accounts also for the ὅτι.
We worship that which we know.—Designating the Jewish fellowship in its living unity, as represented in fact by Himself. [The ἡμεὶς in the mouth of Christ in relation to God, is without example, but is easily explained by the fact that here He speaks as a Jew, defending the Jewish worship as the true one against the Samaritan. Otherwise He always calls God His Father, and puts Himself, as the only begotten Son, in a unique and exclusive relation to Him. In vers. 23, 24 He drops the ἡμεῖς and speaks of the Christian worshippers in the third person.—P. S.] (John Peter Lange and Philip Schaff, A Commentary on the Holy Scriptures: John, New York: Charles Scribner & Co., 1871; elec. edition, Bellingham, WA: Logos Bible Software, 2008.)

So the neuter pronoun is allowing for a reference to a false conception of God as one's focus of worship, not a reference to worshiping the true God with some lack of knowledge that a use of the masculine would have implied.

I think the neuter relative pronoun can be best understood as referring to an implicit demonstrative, along the lines of:

In saying ὑμεῖς προσκυνεῖτε ὃ οὐκ οἴδατε - "You worship [that] which you do not know" - Jesus is essentially saying that the Samaritans, being ignorant of the true God, worship Him in name only. Gregory of Nyssa (c 334-395) explained the passage:

Ye worship ye know not what, the Lord speaks to the Samaritan woman, prejudiced as she was by corporeal ideas in her opinions concerning God: and to her the phrase well applies, for the Samaritans, thinking that they worship God, and at the same time supposing the Deity to be corporeally settled in place, adore Him in name only, worshipping something else and not God ...1

But He rather quickly adds that even though the Jews may worship the true God at that particular moment, it has no bearing on the future (v.22-23):

We know what we worship ... but the hour cometh, and now is, when the true worshippers shall worship the Father in spirit and truth

The Lord did not address the question of who was right, the Samaritans or the Jews, with regard to the proper place of worship. On the contrary, as St. John Chrysostom2 points out: "... having taken away from both of the places priority in dignity, He rouses her soul by showing that neither Jews nor Samaritans possessed anything great in comparison with that which was to be given."3 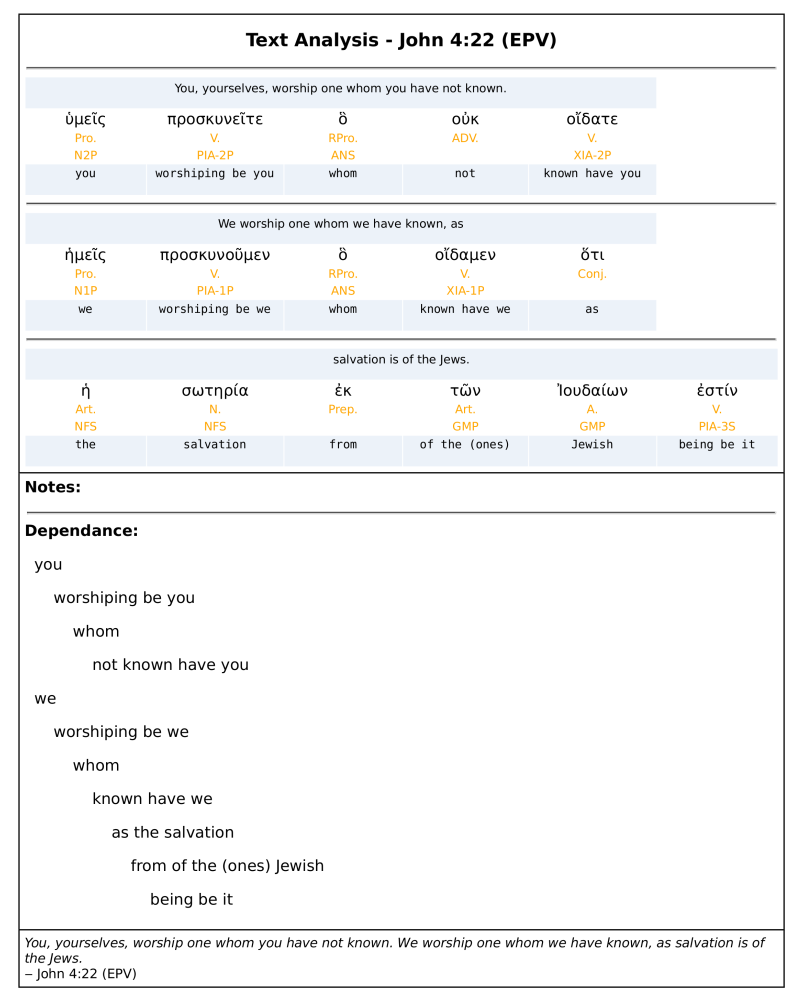 The relative pronouns are neuter because they are not referring to anything gender specific in the context.

Additional note:
The neuter gender is used in regard to persons (including God) when the gender of the person is immaterial to what is being said. Clearly, the intent of Jesus' use of the neuter gender here is because he knows full-well that the Samaritans believe they worship God, but they don't know/understand/recognise who it is they are worshiping. If they did, they would not be concerned upon which mountain they should worship. Of course, the Jews with whom Jesus had been contending (the leaders and elders and teachers of the people) had no deeper knowledge/recognition/understanding of this God than the Samaritans.

Here is an example of John making use of the neuter gender in regard to those who will be raised up on the last day:

Therefore this is the desire of him who sent me: that of each one he has given me I should lose none of them, but I should raise them up on the last day.
‒ John 6:39 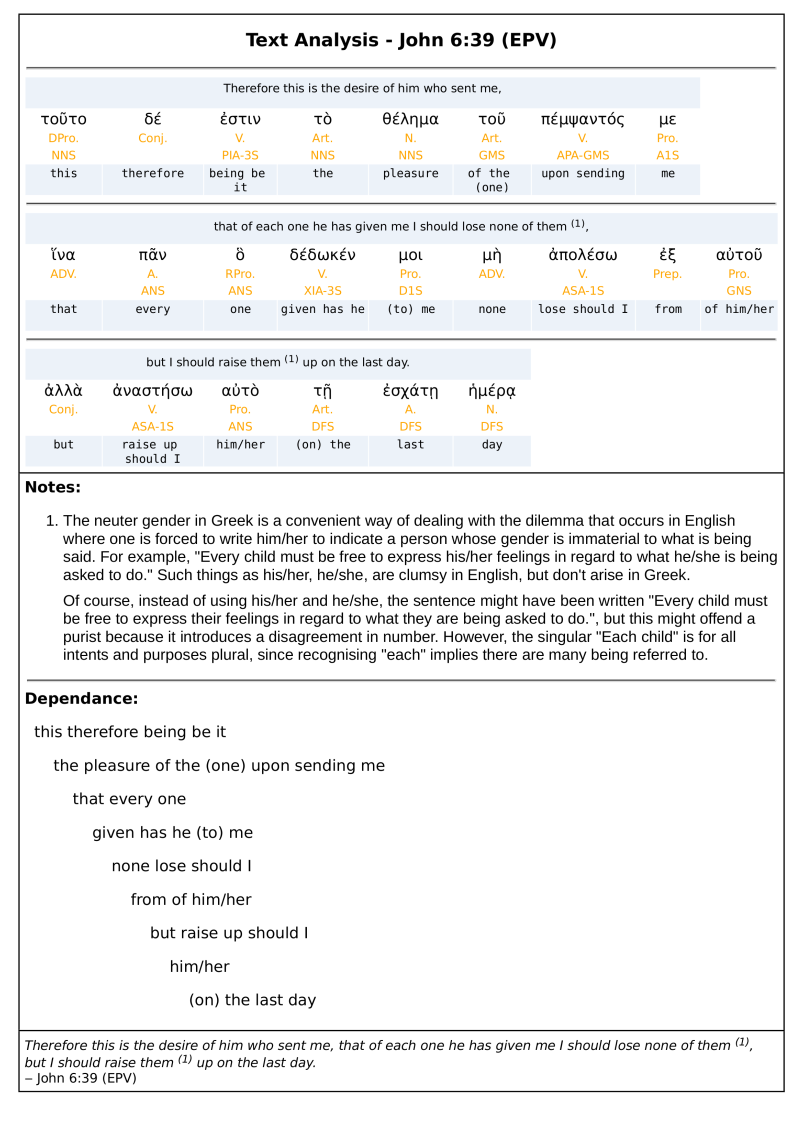 Without this understanding of the neuter gender, one could legitimately conclude that only men will be raised up on the last day.

The relative pronoun here is masculine because it refers to a man/husband in the context.

Skip forward some verses in John 4:32, Jesus says to his disciples:

... I, myself, have meat to eat which you have not known.

Here the relative pronoun is feminine because it refers to the "meat", which is feminine.

What I wonder about this verse is why almost all the versions have gone with "what" instead of "whom". Both are gender neutral, so either is appropriate in the context. Except that, the Jews worship a "who" not a "what" -- Jesus did, at least.

I believe this may have been the issue that gave rise to the OP's question. The NLT translators are on the same page, as they have given:

You Samaritans know very little about the one you worship, while we Jews know all about him, for salvation comes through the Jews.
-- John 4:22 (NLT)

4
What is "that day" in John 14:20?
1
Is the difference between τὸν μόνον ἀληθινὸν θεὸν in John and τὸν ἀληθινὸν θεὸν in 1 John based on the personal fellowship Jesus has with The Father?
11
The significance of “knowing all things” in the Johannine literature
5
What is the correct translation of ὑμεῖς ἐκ πατρὸς τοῦ διαβόλου ἐστὲ in John 8:44?
11
Why did Jesus say “we” in John 3:11?
6
What did John mean by “second sign” (δεύτερον σημεῖον) in John 4:54?
2
In John 11:16 did Thomas think Jesus was going to Lazarus by going to Jerusalem to die?
4
What is the significance of “you will not find me”in John 7:34 (ESV) when it is left out in John 13:33?
2
John 11, Repetition with Mary and Martha
2
In John 5:42 was Jesus' statement particularly offensive because it claimed they were not truthful when reciting the Shema?