12 At the hands of the apostles many signs and wonders were taking place among the people; and they were all with one accord in Solomon’s portico. 13 But none of the rest dared to associate with them; however, the people held them in high esteem. 14 And all the more believers in the Lord, multitudes of men and women, were constantly added to their number. (NASB)

There are at least three explanations of what the rest refers to.

The Greek phrase here is τῶν δὲ λοιπῶν (and of the rest) οὐδεὶς ἐτόλμα (none dared) κολλᾶσθαι αὐτοῖς (to join [with] them).

It has been conjectured that λοιπῶν is a misprint and what was originally in the text at one time was Λευειτῶν, yielding the reading:

and of the Levites (Λευειτῶν) none dared to join with them

Another conjecture is that in some Aramaic text of Acts, the word ‮שֵׂביוּתָא‬ - meaning "elders" - was misread as שֵׁירִיתָא - meaning "the rest" - and was so translated in Greek. This seems rather far-fetched to me, since Luke was a Gentile.

Both of the above conjectures are described in Metzger's A Textual Commentary on the Greek New Testament (2nd ed.).

John Chrysostom's (c 349-407) Homily XII on Acts understands the them (αὐτοῖς) to mean the Apostles, so that the sense of Acts v.12-14 is that while many did, in fact, join themselves with the believers (πιστεύοντες), they did not dare to associate closely with the Apostles - out of fear of what had just happened to Ananias and Sapphira (v.1ff):

After this fear had come upon them, he wrought more miracles; both Peter and the rest; “And by the hands of the Apostles were many signs and wonders wrought among the people; and they were all with one accord in Solomon’s porch. And of the rest durst no man join himself to them,” i.e. to the Apostles.

Bede's comment here is, "The punishment of the two who had fraudulently tried to be joined with them gave an example to the rest."

I get this from the Greek:

Furthermore, by the hands of the Apostles many signs and wonders occurred among the people, and all those in the Porch of Solomon were of one accord. Of those who remained though, not one dared to be joined with them. Nevertheless, the people extolled them.
-- Acts 5:12-13 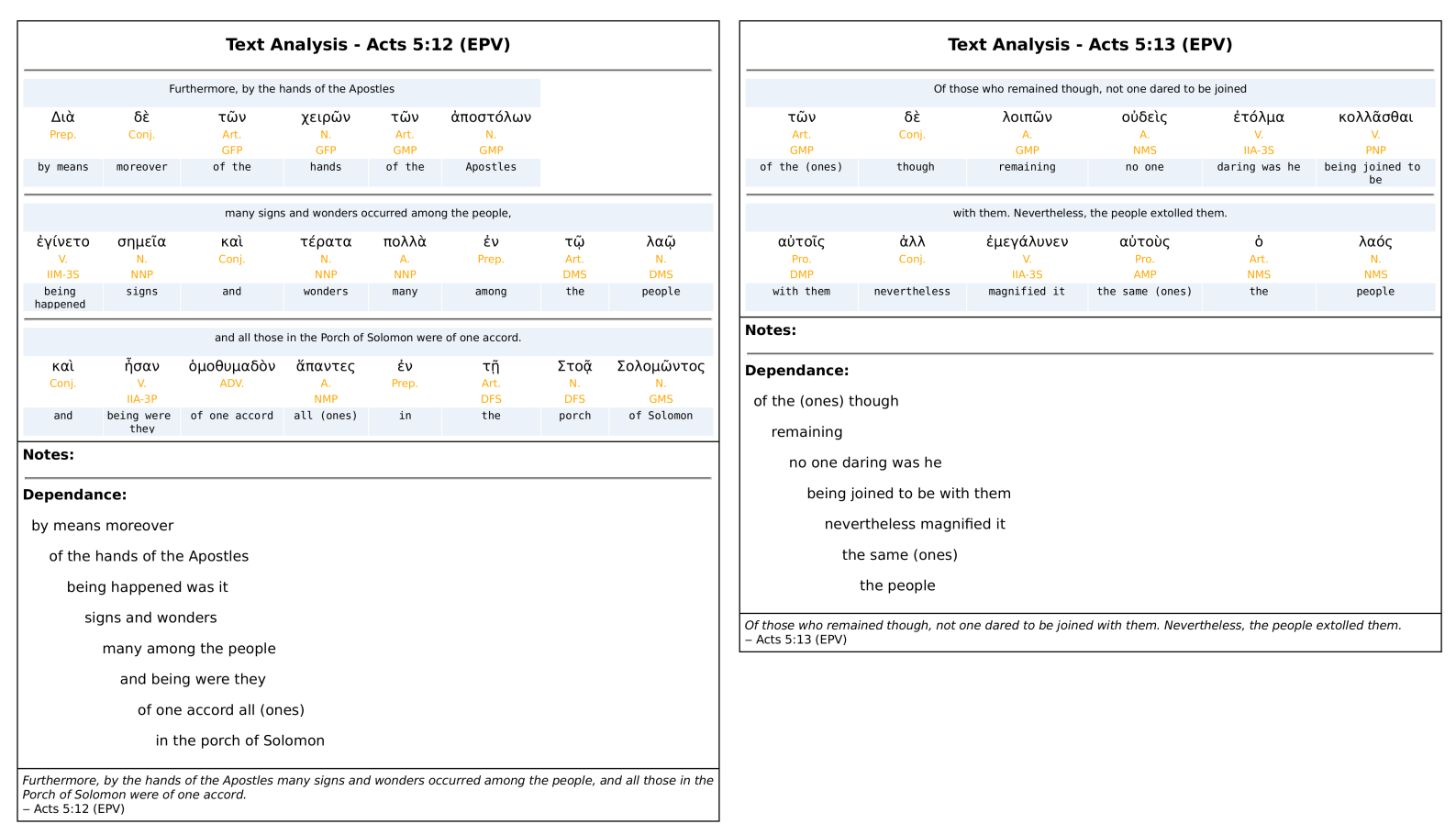 The Greek word λοιπῶν (from λοιπός, Strong's G3062 - loipos) represents "a remainder", like a value left over when one number does not nicely divide another.

The division taking place in this passage was happening among the people, those who were drawn to the Apostles and gathered in Solomon's Porch, and those who weren't/didn't. There were those of one accord, gathered together in Solomon's Porch to extol the Apostles for the signs and wonders they had performed among the people, and then there was the remainder -- "the rest", those who weren't of the same accord because they had concerns about what they had just witnessed with Ananias and Sapphira, or who were disturbed by the power of the influence of the Apostles -- like the high priest and the Sadducees, a couple of verses down (v. 17).

"The rest" in this context, then, is a reference to anyone who was not gathered in Solomon's Porch extolling the Apostles for their many signs and wonders among the people.

I have read multiple answers to this and the fact is that NO ONE really knows the answer. I don't either. The NIV renders this "No one else dared join them, even though they were highly regarded by the people." Now, this could mean that the 'no one else's' were those that were 'highly regarded by the people.' So - the intelligentsia, the elders of the Jews, Pharisees, Sadducees, etc, who might have been like Nicodemus who we remember came at night so that no one knew - these, who were listening and dabbling in believing but were not there yet. Could these have been so terrified of knowing that one of the 120 (who we assume might have been Ananias) was just struck down dead in the presence of the Apostles? They heard the story of how he pretentiously gave a magnanimous gift yet he was presenting the gift as the full amount he received but was really holding back a part of what he actually received? The thought of how they might be similarly struck dead since they knew they had already done similar deeds probably was enough to dissuade them from joining the believers on Solomon's Colonnade.

Not the answer you're looking for? Browse other questions tagged acts referent-identification or ask your own question.

20
Is Paul's visit to Jerusalem detailed in Galatians 2 the Jerusalem Council?
4
In Acts 4:4, did 5000 additional men believe, or was that the total number of men believers?
2
Why were Peter and John needed to lay hands on Samaritans when Philip was there?
0
In Acts 15:12-19 what in Amos convinces James about the gentiles not needing Torah?
2
Did Jesus first appear to the 11 disciples in Jerusalem or Galilee?
9
Do Christians receive the Holy Spirit upon conversion or not (Ephesians 1:13 vs. Acts 8:14-17; 19:1-7)?
1
Was the gift of the Holy Spirit promised only for the first-century Church, according to Acts 2:38-39?
1
What kind of magic did Simon practice? Acts 8:9-24
6
How could they have been baptized and not have received the Spirit?
3
The Whole Church?