Note : My question relates to the TR text (I am quoting Stephens 1550) and I am aware that there is a variant (Scrivener 1881 notes it in italic) which includes εκ σου and which further complicates the issue. I wish to remain with the TR and to examine the translations from that text only.

My question is - where does 'thing' come from ?

'Born' is not a good translation of the verb γενναο, since 'born' in English may refer to the whole conception to delivery process or it may refer to delivery only. And in any case γεννωμενον is a present participle and there is nothing future about it.

Mounce's Grammar tells me that γεννωμενον is the present participle in the middle/passive voice. And tells me that it is either the neuter singular nominative or the masculine singular accusative.

I suspect that translators are getting 'thing' from assuming that γεννωμενον is neuter singular nominative.

and shall be called Son of the Highest [KJV]

This passive statement can be rearranged :

and Son of the Highest shall be called (he)

where Son is nominative and the invisible (he) would be an accusative.

and 'Son of God' shall the being-begotten holy be called

(My rendering here agrees more with Young's Literal than with either KJV or EGNT.)

This shows that the nominative subject of the sentence is 'Son of God' and the predicate is 'the being-begotten holy be called' wherefore it is an accusative expression.

Therefore there is no 'thing'.

Γεννωμενον is masculine singular accusative (not neuter singular nominative) and αγιον is an adjective. There is no 'thing'.

The implications of the translation are considerable. If 'the being-begotten' refers to Deity and if it refers to a Divine begetting (the Father and the Son) then the meaning is not as traditionally has been accepted.

And if 'the holy' refers only to that which came from Mary - something separated in holiness from her - then 'thou shalt conceive', Luke 1:31 (συλληφη, from sullambano 'bring together') refers to a bringing together of that which is Divinely begotten (a present matter indicating an eternal begetting) and that which is separated, in holiness, from the virgin.

Am I correct in my assumption that 'thing' comes from a mistaken translation of a supposed nominative neuter (when it should be a masculine accusative) or is there somewhere else that translators are finding 'thing' ?

The fact that the neuter is employed τὸ γεννώμενον ἅγιον indicates that the phrase is referring to the quality of being born holy and not the individual that is being born that way (see, e.g., Blass et al., A Greek Grammar of the New Testament and Other Early Christian Literature, §138(1)). A couple of similar examples:

This helps explain, I think, why the word thing is inserted in English here. In my opinion, Holy One would have been a more pleasing translation.

I don't know whether any of the above relieves your concerns about γεννάω possibly meaning "begotten" rather than "born". The verb appears 97 times in the New Testament and with the exception of the genealogy in Matthew 1, the King James translates it as "born" in all but a few places - and in these places, the verb is in some past tense, not the present or future.

The verse you cite also contains a somewhat unusual usage of καλέω. One might be tempted, as you point out, to take τὸ γεννώμενον ἅγιον as the direct object of κληθησεται (shall be called), with υιος θεου as the subject. On this and other occasions, though, καλέω serves as an equivalent for the verb "to be", taking no direct object. Another instance of this is Matthew 2:23: Ναζωραῖος κληθήσεται - [He] shall be called a Nazarene, with Ναζωραῖος in the nominative instead of accusative. (This is all described in the Gingrich and Danker edition of Bauer's Greek English Lexicon of the New Testament and Other Early Christian Literature).

Then the angel answered and said to her 1, "The Holy Spirit will come upon you and the power of the Highest will overshadow you. Consequently, the holy one who is born will be called the Son of God."
‒ Luke 1:35 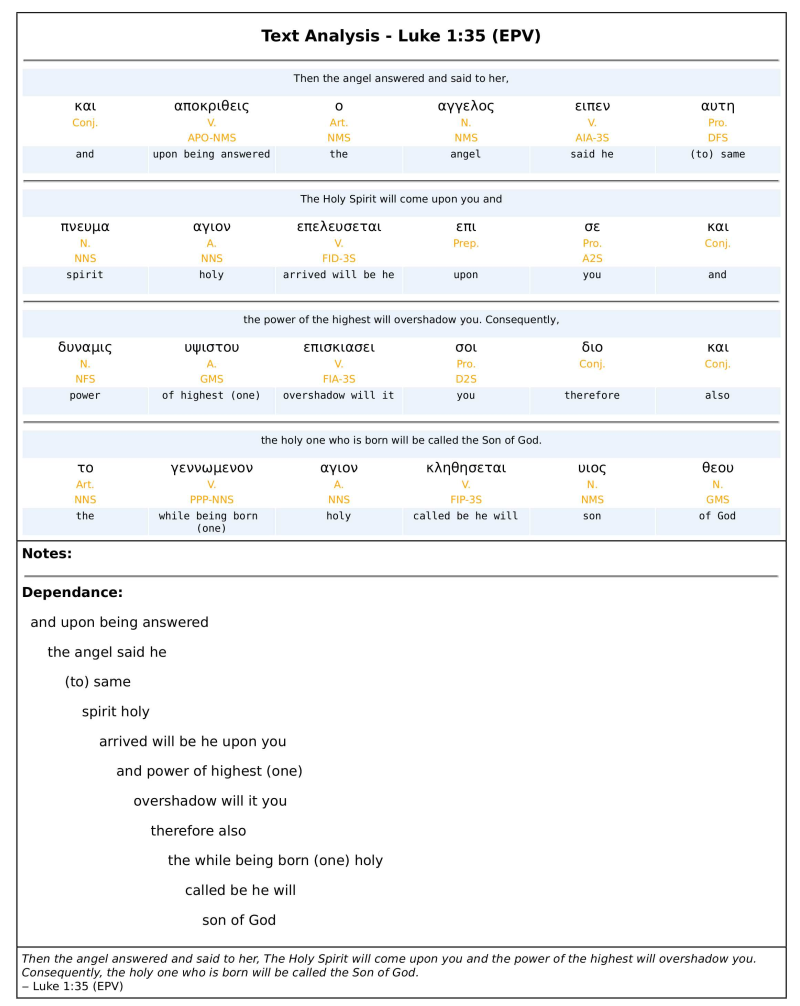 The verb γεννωμενον (parsed PPP-NNS) is being deployed as a noun. It has an article, το (NNS), so the options are: "the (one) while being born" or "the while being born (one)". Either makes sense to me as the author's means of referring to the child that would soon begin to develop in the womb of its mother, i.e. the process "while being born".

What to do with the adjective here, αγιον? Surely since it is the same case, gender and number as the proximate noun (NNS), then it's simply modifying that noun, i.e. the "holy" while being born (one) ==> the holy one who is born.

My experience with Greek indicates that if an adjective stands alone (i.e. it does not agree in case and/or number and/or gender with a proximate noun), then it modifies a generic noun -- a person, place, or thing, etc. Such is the case with υψιστου in the details above. In these cases I add a bracketed generic word to the gloss to indicate noun-type. For example, I have given "of highest (one)" or more simply "the Highest" for υψιστου, since a "person" of power is clearly what is intended in the context.

Now, for the Greek το γεννωμενον αγιον the KJV has that holy thing which shall be born of thee, that is:

Besides the translators' unusual treatment here of αγιον as a noun and not an adjective, they have also injected a 2nd person possessive "of thee" into the text that is nowhere found in the Greek.

I think I have a handle on what the KJV translators have done, but no clue as to why they have done it. I believe they were mistaken to have rendered the text as they did.

Note:
1. Strictly, και αποκριθεις ο αγγελος ειπεν αυτη should read something like "and after being answered, the angel said to the answerer".
Share
Improve this answer
edited Mar 1 '18 at 11:30
answered Mar 1 '18 at 9:16

"And the angel answered and said unto her, The Holy Ghost shall come upon thee, and the power of the Highest shall overshadow thee: therefore also that holy thing which shall be born of thee shall be called the Son of God" (Luke 1:35). Today we see a very interesting way to describe Jesus, who has no beginning or ending, as "that Holy Thing." I took my study to the 1828 Noah Webster Dictionary. In doing so, I found that the word thing, in this sense, refers to, "Any Substance;" "any particular article or commodity." Jesus Christ, God the Son became flesh for one simple purpose—to save all mankind of their sin. The Holy Ghost provided the holy human seed that produced the living Son of God. This is not a mistranslation, but a very accurate way to inform us that Jesus, the image of the invisible God, came in the human form to be tempted as we are, suffer as we should and rise so we can life forever with Him. A human being easily falls into the category of a substance or a thing. It does not degrade Him in any fashion for He was described as "Holy," neither does it imply that He was created. You will find it a beneficial practice never to question the authority of the King James Bible, but accepted it as God’s Living, Holy Word. Easter is the season when we celebrate the Risen Saviour! Jesus, the "Holy Thing", the Son of God, and Redeemer is alive and well. He has bound His hands with every word written in the King James Bible. With this said, "How then shall they call on him in whom they have not believed? and how shall they believe in him of whom they have not heard? and how shall they hear without a preacher" (Romans 10:14)? It is up to us to either tell or send someone who will spread the Word, "And how shall they preach, except they be sent? as it is written, How beautiful are the feet of them that preach the gospel of peace, and bring glad tidings of good things" (Romans 10:15)! Let’s all do our part to reach the world with the Good News of the Resurrected Saviour! Have a blessed day!

Not the answer you're looking for? Browse other questions tagged jesus angels mary or ask your own question.

4
Is Jesus Christ the name of the Father, Son and Holy Spirit?
3
What did Joseph suspect Mary of in Matthew 1:18-19?
5
What does “the government shall be upon His shoulder” mean in Isaiah 9:6?
4
Where did Jesus family find the money to enable them to travel to Egypt? (Matthew 2:13-15)
2
From what tribe did Jesus come?
5
What is the emphasis of προς in 1 John 2:1 ('with' the Father)?
5
Is Jesus from the line of David?
10
John 1:9 - has one Person been the 'light of the world' since the world's inception?
2
Did Jesus’ family move up the economic social ladder?