Where is Cana of Galilee in John 2:1?

On the third day there was a wedding at Cana in Galilee, and the mother of Jesus was there.  Jesus also was invited to the wedding with his disciples.

What evidence do we have to decide where Cana was?

Cana is also mentioned in John 4:46. John 2:12 seems to give some indication of the location.

Below is a map of the two possible sites and their proximity to a verified Roman road of the time: 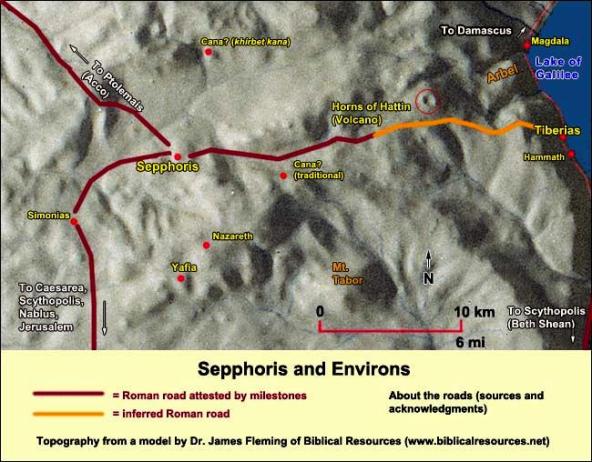 Here is Nathaniel's1 contribution to a discussion with Philip regarding Jesus' birthplace:

And Nathanael said unto him, Can there any good thing come out of Nazareth? Philip saith unto him, Come and see.
-- John 1:46 (KJV)

The map shows where Nazareth is situated in relation to the road. It is roughly the same distance south as Khirbet Kana is north. According to Nathaniel's comment, Nazareth was clearly looked upon as an inferior place to live -- by the residents of Cana at least.

Life in towns like Nazareth and Khirbet Kana would have been much more traditional than places like Cana, since very few travellers passing though the region would have taken the trouble to pay them a visit. Not so Cana, though. Being only a fifteen minute diversion they would have had many visitors, bringing with them money and news and different ways of life. It follows that residents of Cana would view themselves as better-off and more "progressive" than those in towns like Nazareth and Khirbet Kana, who would have been thought of as backward and unsophisticated.

Based on Nathaniel's comment (and its implications), the traditional site of Kafr Kanna still remains the most likely candidate for first century "Cana of Galilee".

Robert Young states the following in his Analytical Concordance 1879 :

All we can make out is that Cana was not far from Capernaum, and on a more elevated situation. The traditional site is at Kefr Kenna a small village 4.5 miles N.E. of Nazareth.

Of the other contender, Young states :

A rival site is further north, a village about 5 miles north of Sepphoris and 9 from Nazareth near the present Jefat, the 'Jetayata' of the Jewish wars. This village still bears the name of Kana-el-jelil which is the exact representative of the Hebrew original (as is Kenna widely different from it) and it is in this fact that the superiority of the northern Kana seems to rest.

Not the answer you're looking for? Browse other questions tagged john new-testament geography or ask your own question.

5
Where was the dinner in John 12?
8
What/where is Topheth?
3
Where is Karkor?
8
Where is Dalmanutha?
5
How did John the Baptist question whether he should baptize Jesus (Matt. 3:13-15), if he did not know before Jesus' baptism (John 1:31-34)?
2
Were the two disciples heading to Emmaus heading back to Galilee?
2
Where was Jesus before he went to Galilee in John 1:43?
3
John 2:9 & 10 Does Jesus condone drunkenness at the Cana wedding?