Fulfillment of Jacob's request regarding the inheritance of the land (Genesis 48)?

In Genesis 48:5-6 Jacob transfers the firstborn right from Reuben to Joseph (see 1 chronicles 5:1), and adopts his sons Ephraim and Menasseh as his own, and gives them prioritized standing in inheritance (NIV):

Now then, your two sons born to you in Egypt before I came to you here will be reckoned as mine; Ephraim and Manasseh will be mine, just as Reuben and Simeon are mine. Any children born to you after them will be yours; in the territory they inherit they will be reckoned under the names of their brothers

It would seem like Jacob is giving Joseph a double portion in the land of Canaan due to the firstborn rights that has been transferred to him, and gives each of his two sons a portion in the land (that is the reason why the OT [see for example beginning of Numbers] always counts them as two distinct tribes though they were both children of Joseph). That Joseph is getting a double portion is clearly expressed a few verses later (verse 22 KJV),

Moreover I have given to thee one portion above thy brethren, which I took out of the hand of the Amorite with my sword and with my bow.

But when we take a look in the book of Joshua 17:14 it doesn't seem like the children of Joseph were initially given a double portion in the land, but one allotment was given to the Joseph and divided between the tribes of Menasseh and Ephraim (NIV),

The people of Joseph said to Joshua, “Why have you given us only one allotment and one portion for an inheritance? We are a numerous people, and the Lord has blessed us abundantly.

Only after they complained about their population did Joshua give them a bigger allotment (and even this was not related to Jacob's promise, it was more like an afterthought!). Assuming that these words were indeed said by Jacob and were known to the Israelites, what happened to Jacob's request that they be given a double portion in the land, and why was it disregarded by Joshua?

There is also a problem with the text itself, for it is unclear what Jacob meant when he assigned Joseph a double portion in the land through the adoption of his sons. Since we know from Numbers 26:54 that the portions of land are to be allotted according to the size of its population, the tribe of Joseph would've gotten the same amount of land even if Menasseh and Ephraim weren't adopted by Jacob! So what exactly was Jacob trying to do here?

So what should we make of the ambiguous verses in Genesis 48. My questions can be summarized as follows:

Note: This question is based on the assumption that Jacob made a promise to Joseph about his inheritance in the future, and that his words are not meant to be a prophecy! While anyone is invited to question the assumption (though the first question would still need to addressed), disregarding it is quite pointless as the answer will be useless.

I am aware of the Jewish commentators (Rashi and others) who argue that Jacob didn't give Joseph a double portion in the land, but only requested that they be counted as separate tribes. But this position is a very difficult to defend and wholly unsatisfactory as the verses are quite clear that they are to inherit more land than the others!

I am unsure as to why you feel that they did not receive their increased allotment. In the verse you referenced (Joshua 17), it makes it clear that they will receive additional land.

14 And the children of Joseph spake unto Joshua, saying, Why hast thou given me but one lot and one portion to inherit, seeing I am a great people, forasmuch as the Lord hath blessed me hitherto? 15 And Joshua answered them, If thou be a great people, then get thee up to the wood country, and cut down for thyself there in the land of the Perizzites and of the giants, if mount Ephraim be too narrow for thee. 16 And the children of Joseph said, The hill is not enough for us: and all the Canaanites that dwell in the land of the valley have chariots of iron, both they who are of Bethshean and her towns, and they who are of the valley of Jezreel. 17 And Joshua spake unto the house of Joseph, even to Ephraim and to Manasseh, saying, Thou art a great people, and hast great power: thou shalt not have one lot only: 18 But the mountain shall be thine; for it is a wood, and thou shalt cut it down: and the outgoings of it shall be thine: for thou shalt drive out the Canaanites, though they have iron chariots, and though they be strong

Additionally It is clear that Ephraim by the numbers is much larger than Manasseh.

16 And for the precious things of the earth and fullness thereof, and for the good will of him that dwelt in the bush: let the blessing come upon the head of Joseph, and upon the top of the head of him that was separated from his brethren. 17 His glory is like the firstling of his bullock, and his horns are like the horns of unicorns: with them he shall push the people together to the ends of the earth: and they are the ten thousands of Ephraim, and they are the thousands of Manasseh.

Additionally, if you read about the allotment in the land, you will see that Manasseh and Ephraim together have well over 2 times the amount of land of any other tribe, sometimes 3-4 times more. 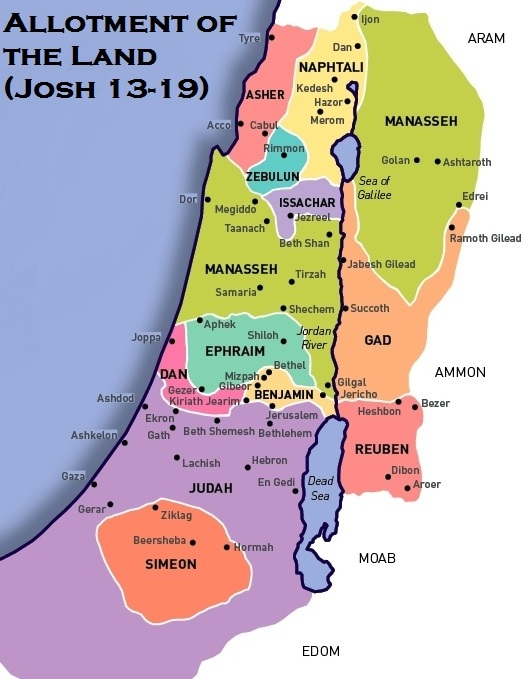 Hope this clears it up for you.

Jacob's blessing on Joseph (and sons) was not an intended prophecy but a pre-recognition of the law for the two-fold compensation regarding theft. When Joseph was captured by his brothers and eventually sold into slavery in Egypt, he had his heritage (and presumably his life) stolen from him. Joseph's sons were merely the namesakes of that two-fold restitution.

There are 3 possible ways to understand these verses and the later settlement of the land. But first we need to examine one more difficulty in the text. Genesis 48:22 states:

And I am giving you shechem one on your brothers, that I took from the hands of the Amorites with my sword and my bow.

We will deal with the meaning of the word שְׁכֶ֥ם below. But a simple reading of the verse indicates that whatever Jacob was giving Joseph was something that Jacob had taken--in the past-- from Amorites by force. If this verse is a reference to the double portion Joseph would receive in the land in the future, why is it implied that Jacob had already conquered this land?

Not the answer you're looking for? Browse other questions tagged genesis hermeneutical-approaches or ask your own question.

12
How big were the nomadic clans of the patriarchs?
6
What is the name of Joseph's Tribe
3
What is the significance of locations in hermeneutics? Amos 5:4-6 as case passage
6
What was the "one portion" given to Joseph above his brothers in Genesis 48:21-22?
1
In Genesis 49:1-27 is Jacob describing the general future, final days or demise of each of the tribes of his sons/Israel?
4
Why are there 12 tribes of Israel and not 13?
2
Genesis 48:12 - Is having someone on your knees the same as having them sitting on your lap?
6
Why are the verbs in Jacob's vow (Genesis 28:20) translated so differently?
4
Who are the archers in Genesis 49:23?
2
Did Joseph have other children?