Why did angels speak a sentence of eleven words without a verb?

and upon earth peace

Why did the angels speak eleven words - seven nouns, three prepositions and a conjunction - yet not one, single, solitary verb ?

The short answer is because they chose to. This "quip" answer reveals the challenge of answering most "why" questions, as "why" normally requires inference of motive, rather than actually interpreting anything directly from the text (unless the text gives insight into motive, in which case the "why" question would likely not even be a question, as it would already be answered in the text).

Nevertheless, some logical inference can be made to produce a longer, inferred, speculative answer.

The Hebrew people often use verbless clauses in speech and writing, when the verb omitted is a state of being verb. This is so common that whole books have been written on the topic.

So the angels may be communicating as the Hebrew shepherds might expect via verbless statements, and the idea would then be that an implied being verb pairs with each nominative as the subject:

The clauses may be presently (to that time) factual statements: God has glory for what He is doing this night of Christ's birth, and God establishes/expresses His peace toward the earth and goodwill in humanity by this.

The clauses may be implied commands: The shepherds (and all people) ought to glorify God, be at peace, and have goodwill toward one another because of God's work this night.

The clauses may be prophetic statements: This child born tonight, when He takes final control of the earth, He will bring God glory, peace to all the earth, and a lasting goodwill among men.

All three ideas may be implied.

Speech, words, are symbolic. The nominative case (as these statements all are centered on, with an associated prepositional phrase for each) is the most basic of that symbolism as it "names" objects and concepts, putting them out there for "consideration." Children generally learn to speak by first declaring nominative statements as they see (concrete) things: Mama! Bird! Puppy! Often pointing to it with great delight.

This does not go away when one grows up. As Daniel Wallace in Greek Grammar Beyond the Basics (Grand Rapids, MI: Zondervan, 1996)

The nominative is the case of specific designation. (p.37)

And as such, there are a variety of "grammatically independent uses of the nominative" (p.49) in Greek (or most langauges). One such use is that of "exclamation":

It is a primitive use of the language where emotion overrides syntax: The emotional topic is exclaimed without any verb stated.

An exclamation is indeed a "primitive use" in bringing words and emotion together to focus attention on the content of the exclamatory remark.

The keys to identifying a nominative of exclamation are: (1) the lack of a verb (though one may be implied), (2) the obvious emotion of the author, and (3) the necessity of an exclamation point in translation. (p.60)

So it may be the angels intended to convey an emotive contemplation of what it means that the Christ has been born.

Wallace also notes on pages 54-55 of Greek Grammar Beyond the Basics the use of the "nominative in proverbial expressions":

A substantive in the nominative is used in proverbial expressions that have no finite verb [emphasis his].... The reason for the unusual syntax is that the proverbial saying, even if fragmentary, has become a fixed part of the literary [we could add verbal as well] heritage. Since it is well known in that particularly pithy form, to round out the syntax would be to spoil the effect.

So this is another case of a verbless clause. I am not aware of (nor have I really looked for) any literary evidence to indicate for certain that any of these three phrases are distinctly proverbial; and whether they were proverbial in speech or not would be unknown without some literary record of that.

Certainly one can imagine the possibility that the three phrases may have been used proverbially. I can imagine Hebrew believers calling out "Glory [be] in [the] highest God" for any number of reasons of praise (but along the lines of Ps 57:5, 148:13), and offering prayers for God to bring peace on earth in the Messianic expectation of the "Prince of Peace" (Isa 9:6; see also Ps 37:11), and good things in humanity (similar to Ps 107:8, et al.).

There may be one or a combination of grammatical, linguistic, and cultural reasons why the angels chose to make the announcement this way. We cannot know for sure other than, if one believes God is in control of the announcement and of the inspired recording of it (as I do), that He wanted it done that way for His record of the events.

Angels have an understanding about God and the physical world which transcends the human experience.

If an angel were to use a verb, they would need to choose one and then decide on a tense. Especially in the Greek, verbs will indicate, past, present, or future actions as well as nuances such as in the past and completed, in the past and continuing, and so forth.

What tense should an angel choose to deliver this message:

“Glory to God in the highest, and on earth peace among those with whom he is pleased!”
(Luke 2:14 ESV)

From the point of an angel, there is no tense which will correctly place or describe this action in time. Obviously it is being done (and should be done) in the present. However, for the angel it was being done in the past and will be done in the future and will also be a continuing action from the past to the present and into the future.

The reason the angels deliver this message of praise and peace without using a verb is the Greek language lacks a tense which would accurately place these actions in time.

The reason there is no verb is: that's simply the nature of such official proclamations.

For example, at any official event where the Queen of England makes an entry, it would be typical to hear the proclamation of it as, "Queen Elizabeth the Second, by the Grace of God Queen of this Realm and of Her other Realms and Territories, Head of the Commonwealth, Defender of the Faith".

The angels in the context of Luke 2 where doing a similar thing, i.e. making an official proclamation concerning the extraordinary event that had just taken place in Bethlehem.

The Greek of Luke 2:14 is interesting, though: 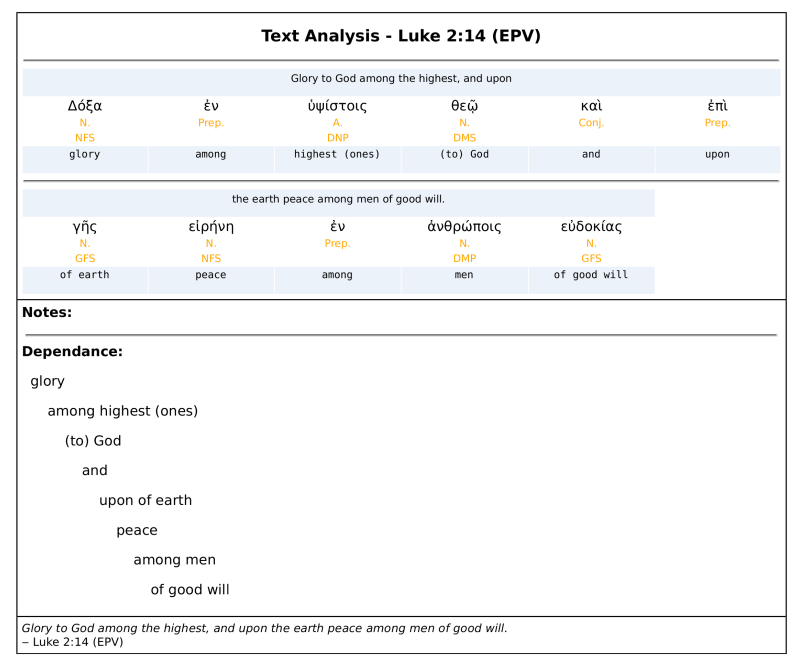 The second thing to notice is: there is no qualification concerning "glory" among the highest (ones), but there is concerning "peace" among men. There is δοξα (glory/honour/praise/dignity/worship) given to God among the entire host of heaven for the event that has just been proclaimed, but among men there will be peace for only those "of good will".

The third thing to notice is: εὐδοκίας, the Greek word given in English as "good will", expresses pleasure/delight/satisfaction. In other words, "men of good will" are all those who are pleased/delighted/satisfied by the event that has just taken place. Men like the Magi and the shepherds, whom we are told were pleased/delighted/satisfied to go themselves and proclaim to others what had happened:

18And all they that heard it wondered at those things which were told them by the shepherds. ... 20And the shepherds returned, glorifying and praising God for all the things that they had heard and seen, as it was told unto them.
-- Luke 2:18,20 (KJV)

Not the answer you're looking for? Browse other questions tagged greek luke grammar or ask your own question.

4
Numbers 12:2 - Translation Discrepancy - Did the Lord speak only through Moses?
3
Why does Luke 9 speak of Jesus “setting his face” to go to Jerusalem?
2
Why is this future verb translated as a perfect? (John 2:17)
4
Why is this verb “לַעֲשׂוֹת” infinitive? (Gn 2:3)
2
Which is the main verb of the sentence in 2 Peter 1,3-4?
2
Why does the Apostle Paul use the verb παρακαλέω twice in Philippians 4:2?
1
Why does the Greek use different words for “like” in Revelation 13:11?
1
In Deuteronomy 8:3 why is “live” a future verb?
3
Did Jesus speak pidgin or ungrammatically at John 8:58?