In Acts 19:14, Is "Seven Sons of Skeva" a valid translation? Are there any other plausible interpretations?

1.) What is the significance that the sentence phrasing is different - in several Greek manuscripts?

The mGNT Greek of Acts 19:14 is somewhat different to the TR, and for the purpose of exploring "alternatives", here are my thoughts (whatever they might be worth).

I could get this from the mGNT:

Furthermore, they were seven sons of a certain questionable Jewish chief priest who were doing this. 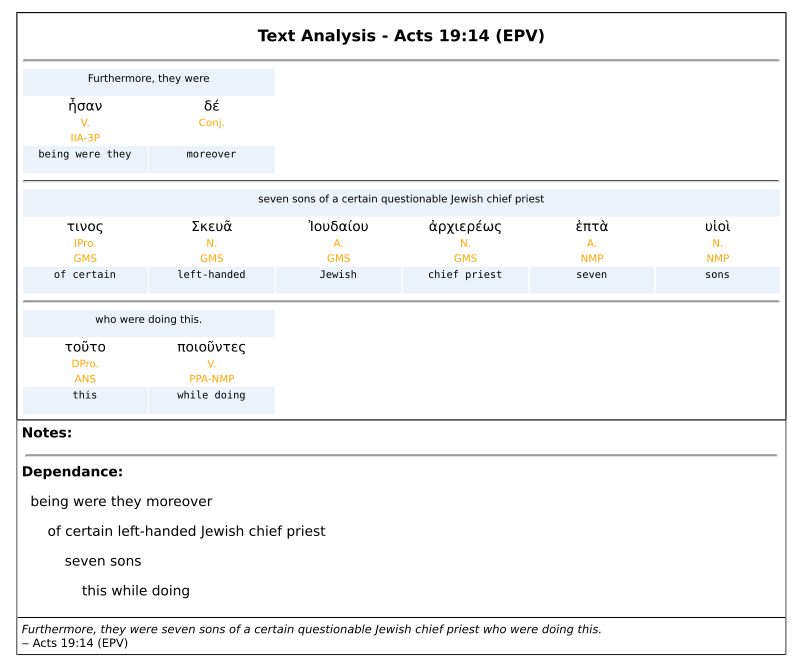 And from the TR I could get this:

Furthermore, they were certain sons of Skeva (a Jewish chief priest) - seven who were doing so. 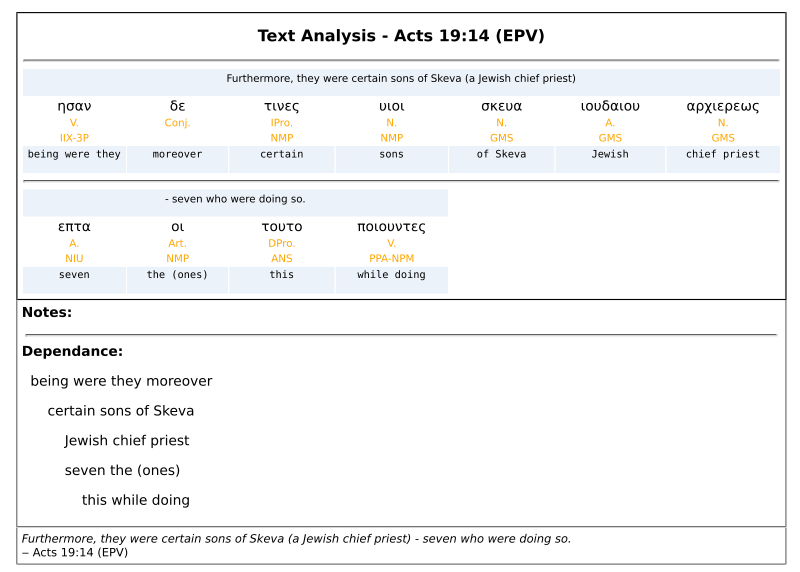 Since the OP is looking for "alternatives", then I consider that a license to think outside the box. So, I have chosen in the mGNT rendering to go with Strong's suggestion of "left-handed" as a possibility for Σκευᾶς. Left-handed, of course, being someone who is "not right".

Okay, what does one now do with something like τινος Σκευᾶ Ἰουδαίου ἀρχιερέως, a sequence of four genitives? For my mGNT rendering I have taken ἀρχιερέως as the principal noun and the other genitives standing as adjectives, giving "of a certain questionable Jewish chief priest ...". That, of course, is not the only possibility, I could have taken Ἰουδαίου as the principal noun, i.e. a Jewish (one), or a Jew, which would have given "of a certain questionable Jew - of a chief priest - ...".

With regard to "sons", the word υἱοὶ appears in both versions of the Greek, but in different places. In the mGNT, we have τινος Σκευᾶ ... ἑπτὰ υἱοὶ, i.e. "of a certain left-hander ... seven sons", but in the TR we have τινες υιοι σκευα ... επτα, i.e. "certain sons of Skeva ... seven". In regard to these sons, they could be Skeva's/the-questionable-chief-priest's progeny or his adherents - something akin to the OT "son's of the prophets.", i.e. members/students of an order or school.

Moved by the OP's comment, I have done some searching to try to discover what might have inspired Strong to suggest "left-handed" as a possibility for σκευα. I found an article by Taylor Marshall that is very enlightening. He says:

Acts 19:14 tell us about the seven sons of a “Jewish High Priest” by the name of “Sceva”. If one looks down the list of high priests, there is not a high priest in Jerusalem named “Sceva”. Biblical commentators resolve this discrepancy by stating that Sceva must have been a Jewish man who became a pagan “high priest”. I’m not ruling that out, but I find it very unlikely.

The reason for this is that the name “Sceva” is a Hellenized version of the Latin word scaeva meaning “left-handed” and by extension, “sinister” and “untrustworthy”. Lewis & Short’s Latin Dictionary also attests to a classical meaning of “perverse” or “ominous”.

Marshall goes on to suggest that this "left-handed" Jewish high priest might indeed have been Caiaphas.

Jerome claims that the Hebrew name Skeva means something like "yelping little fox."1 I don't have access to Jerome's actual text, so I don't know how he arrived at this conclusion; perhaps it is a paraphrase. He seems to be relating "Skeva" to the Hebrew שועל, as it appears, for example, in Songs 2:15, with the letters "shin-vav-lamed". When vocalized (using Masoretic notation) as שׁוּעָל (šû·ʿāl), the word means fox or jackal. With a change of a single letter, the word can become שַׁוְעָה (šǎw·ʿā), which means "cry for help". Perhaps there is a better explanation, but that is the only path I can see that would somewhat justify Jerome's claim.

Bede follows Jerome's interpretation of the name in his commentary on this Acts 19:14:

This animal, which is very shrewd with respect to deceit and craftiness, represents one, whether Jew, Gentile or heretic, who is always plotting against the church of God, and, as it were, continuously making a racket with their babbling voices. Concerning them the command is given to the guardians of the church, Catch for us the tiny foxes that are wrecking the vineyards[Songs 2:15].2

Not the answer you're looking for? Browse other questions tagged word-study acts textual-criticism historical-interpretation onomastics or ask your own question.

7
How should Sirach 3:17 be translated?
7
How can we understand differences between NWT and Latin/Greek on Acts 20:28?
7
Why do some translations say “translated Dorcas” in Acts 9:36?
8
In Acts 20:7, why is the phrase τῇ μιᾷ τῶν σαββάτων translated “the first day of the week” when it could mean “the first Sabbath”?
0
How should Mark 3:14 be translated?
4
How could a diaspora Jew be considered a “high priest” at Acts 19:14?
1
Why has μετανοήσατε been translated as “repent” in Acts 2:38?
2
In Acts 24:15, how should μέλλειν ἔσεσθαι be rendered?