Why was Reuben described as being “unstable as water” Gen 49:4?

Unstable as water thou shalt not excel; because thou wentest up to thy father's bed then defiledst thou it: he went up to my couch (Gen 49:4)

Throughout Jacobs prophecy in Gen 49, he describes his sons using animals and in the case of Joseph he used a plant.

But why is Reuben described using an inanimate entity like water?

Volatile like water, you will leave no remnant. When you went up to the bed chamber of your father, then you profaned the increase of my bed. 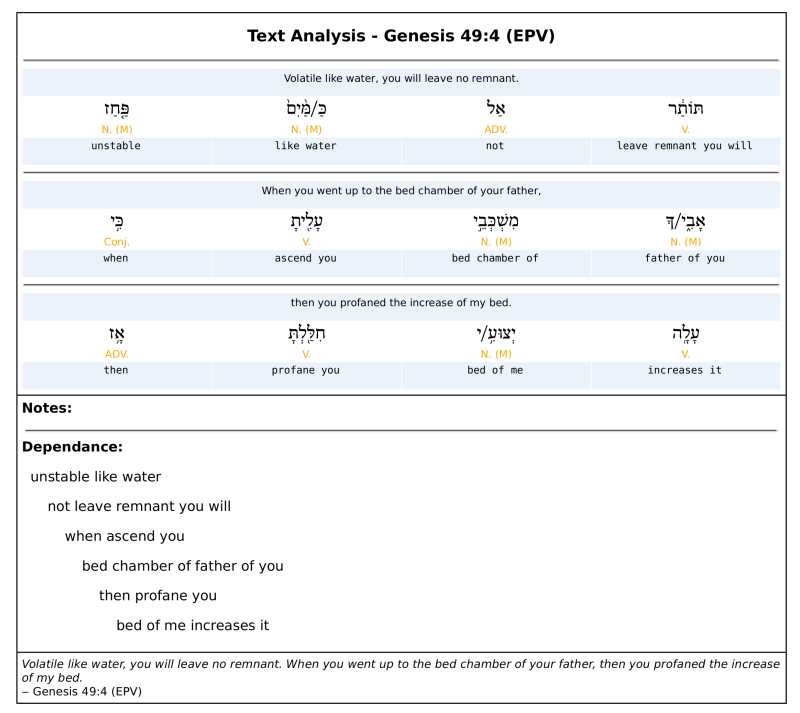 The Hebrew word פַּ֤חַז is understood by Strong as meaning "ebullition, i.e. froth (figuratively, lust): unstable.", an idea also having the support of Gesenius:

Water is unstable - volitile - because it will boil away and leave nothing behind. This is why Jacob then chooses the word תּוֹתַ֔ר, which is clearly related to something that is left over or remains.

The fulfillment of Jacob's words concerning his son Reuben can be found unmistakably declared in 1 Chronicles:

Now the sons of Reuben the firstborn of Israel, (for he was the firstborn; but, forasmuch as he defiled his father's bed, his birthright was given unto the sons of Joseph the son of Israel: and the genealogy is not to be reckoned after the birthright.
-- 1 Chronicles 5:1 (KJV)

Jacob, with heavenly insight, could see that Reuben's lack of reverence for the sanctity of the bedroom of his father would have long term consequences for his (Reuben's) progeny.

First of all, on 12 sons of Jacob, only a half of them were represented by animals, or, in one case (Joseph) by a plant (tree?). Five of them (Simeon and Levi, Zabulon, Gad, and Asher) had no animal/botanical comparisons applied to them. So, I don't find it strange that Reuben was described with 'water/s'.

The purpose of Jacob, in this cases, was to find something in the creation that would serve as 'elements of comparison' to correspond with some prevalent characteristics of some of his sons (like we do until today when we say to a son of us, e.g. 'you are as stubborn as a mule').

A final point. Two related terms in Akkadian language support the connexion of this Hebrew term with the concept of 'insolence', 'arrogance'. In fact, PAHAZU (in neo-Assyrian) means 'to be arrogant, high-handed'; and PAHHUZU (in neo-Babylonian) means 'cad', 'scoundrel' (Chicago Assyrian Dictionary, XII:32-33).

I hope this will be useful for you.

Water is the first natural substance mentioned in Scripture:

The creation of the earth begin from water:

Beginning the prophecy of Reuben, the firstborn, with water parallels creation. In other words, Jacob begins by using water with his firstborn just as God begin using water in the creation of the earth. The use of animals in the prophecies of the sons who came after Reuben also follows the sequence of creation.

Water maybe "lifeless" yet besides being essential for life, it was the physical location for the first type of animal life:

So God created the great sea creatures and every living creature that moves, with which the waters swarm... (Genesis 1:21)

Again there is a parallel with the firstborn son who is supposed to be the person who preserves and continues the family name. However, Reuben defiled his father's bed. There is a prophetic parallel in Revelation:

Then I saw a new heaven and a new earth, for the first heaven and the first earth had passed away, and the sea was no more. (Revelation 21:1)

And he said to me, “It is done! I am the Alpha and the Omega, the beginning and the end. To the thirsty I will give from the spring of the water of life without payment. (Revelation 22:6)

The "sea" named on the third day of creation is no more (it was "unstable") and is replaced by the spring of the water of life.

Also, water is used symbolically in prophecy to represent people:

therefore, behold, the LORD is bringing up against them the waters of the River, mighty and many, the king of Assyria and all his glory. And it will rise over all its channels and go over all its banks (Isaiah 8:7)

And the angel said to me, “The waters that you saw, where the prostitute is seated, are peoples and multitudes and nations and languages. (Revelation 17:15)

Finally, water may be lifeless, but it is associated with eternal life:

Then the angel showed me the river of the water of life, bright as crystal, flowing from the throne of God and of the Lamb (Revelation 22:1)

One could say the first prophecy which is about the unstable waters of Reuben is replaced by the living waters of eternal life offered by Jesus.

The simplest answer to your question of "why is Reuben described using an inanimate entity like water?" is that unlike his brothers who are blessed and likened to various fierce and kingly animals, Reuben is rebuked and criticized for acting impetuously, there is no point in likening him to any animal, since the object is to degrade him for his foolish acts.

However there is something else you need to know (which might change your perspective). I noticed that you accepted the translation of פחז as unstable to be the proper one. Indeed most English translations choose this translation to be the correct one. However, the Jewish translators chose to translate this word as "rushing" or "hastiness" which in this case (פחז כמים) will read something like: "water-like rushing/hastiness". In other words because Reuben rushed like water to lay with his fathers concubine Bilhah he lost his firstborn rights; his rash imprudent decision is what caused him to lose out. The Stone edition (a Jewish translation) translates similarly, "water-like impetuosity", which is basically the same thing.

The truth his that the word פחז (which is pronounced "pachaz") is not found anywhere else in the bible. The word appears once more in Judges 9:4 (אנשים רקים ופוחזים), but it does not shed any light on its true meaning. Since there are no other words to juxtapose פחז with, the translators translate according to their own understanding based on the context of the verse coupled with common sense. However, Nachmanides a famous Jewish commentator suggests that the closest word to פחז is the Hebrew word חפזון (which is pronounced "chipazon") which sounds very much like it, only the order of the letters "peh" and "chet" are reversed (in English it would be like the similarity between "rebel" and "barrel", though their meaning are wholly different). The word חפזון is found numerous times in the bible and is translated by most as "hasty" or "in haste" (see for example Exodus 12:11). Similarly the word פחז would be translated as "hastiness". Jewish literature (Talmud and Midrash) is also full of references to פחז and they're all found in such a setting. The word פוחזים found in Judges (ibid) can also be translated "impetuous" accordingly; indeed this flows very well with the preceding word "רקים" which means empty, thus rendering: "empty and impetuous people", a euphemism for "bums".

I think that the evidence strongly points to the Jewish translation of פחז as "rushing", "hasty" or "impetuous". This fits very nicely with the context of Reuben acting impetuously to lay with his fathers concubine and thus losing out his birthright.

Reuben was unstable as water. He had no standard of his own. Water expands when boiled and when cooled. A metal expands when heated and contracts when cooled but no so with brother Reuben. Water has no self control and can cause damage where ever it finds a path of least resistance.

Water of course can be easily moved and can take on various shapes and forms. I think this therefore represents the unstable nature of Rueben...My question would be about the defiling of his fathers bed and what that entails. The answer to this question may be contained in scripture already but I personally am not aware of the information.

He said he would offer his own sons as sacrifice, in the end it was Judah who offered himself.

He said he wanted to save Joseph but in the end he didn’t.

He slept with his fathers wife.

Not the answer you're looking for? Browse other questions tagged prophecy jacob layers-of-meaning narrative-analysis or ask your own question.

8
Why does Jacob say “because I saw God face to face”? (Gen 32:30)
3
Exo 32:20: Was it part of a Mosaic atonement ritual to drink water mixed with the ashes of the golden calf?
1
In Genesis 49:1-27 is Jacob describing the general future, final days or demise of each of the tribes of his sons/Israel?
0
In 1 Cor 14:3-5 what was the nature of the prophecies being given in Corinth?
8
Who was preventing Jesus's statement from being understood? Luke 9:45
1
Why did God change Saul's mind immediately after Samuel spoke to him which was prior to the events mentioned in 1 Samuel 10?