Jude:1.4 For certain men have crept in unnoticed, who long ago were marked out for this condemnation, ungodly men, who turn the grace of our God into lewdness and deny the only Lord God and our Lord Jesus... Jude 1:13 Christ. raging waves of the sea, foaming up their own shame; wandering stars for whom is reserved the blackness of darkness forever.

Since Stars shine, I want to understand why Jude refers to these men who turned grace into lewdness as "wandering stars".

The Greek word behind the English 'wandering star' is planetes which is the word, both ancient and modern, for the heavenly bodies which behave other than the stars, their course being very perplexing until it becomes evident that they are circling the sun.

Their orientation is not fixed in the heavens, nor fixed according to the earth. They wander and they circle a ball of fire. The allusion is inescapable. And this is the description that Jude applies to certain people. He thus comments upon their unearthly behaviour and their inescapable destiny.

The opposite description is given to Moses, who is described as asteios - in Acts 7:20, by Stephen, and also by the writer to the Hebrews, in 11:23 - aster being the Greek term for a star that is fixed in relation to the earth and whose course is predictable.

'Fair' and 'proper' are the translations applied by the KJV to Moses when asteios is used, indicating the opposite condition to the persons commented upon by Jude.

[Note regarding comment : There is dispute as to the derivation of asteios from aster. I take my reference from 1) the link here (though obscure, I personally favour it) and 2) the fact that holy scripture never uses 'astu' for city, always using 'polis'.

Scripture has a very organised vocabulary and never expects us to go outside of it to determine meaning, I find. I know of no instance where it is necessary to refer to profane Greek literature (in order to make connections of the kind I have made here, regarding aster and asteios).

Had Stephen, or Luke, or the writer to the Hebrews wished to liken the infant Moses to that which is of the city, they would have chosen the word 'polites' - a citizen - or a close derivative. I do not accept that they would have referred to a very obscure word, never otherwise used by writers of scripture.

So, I stand by what I have written.] 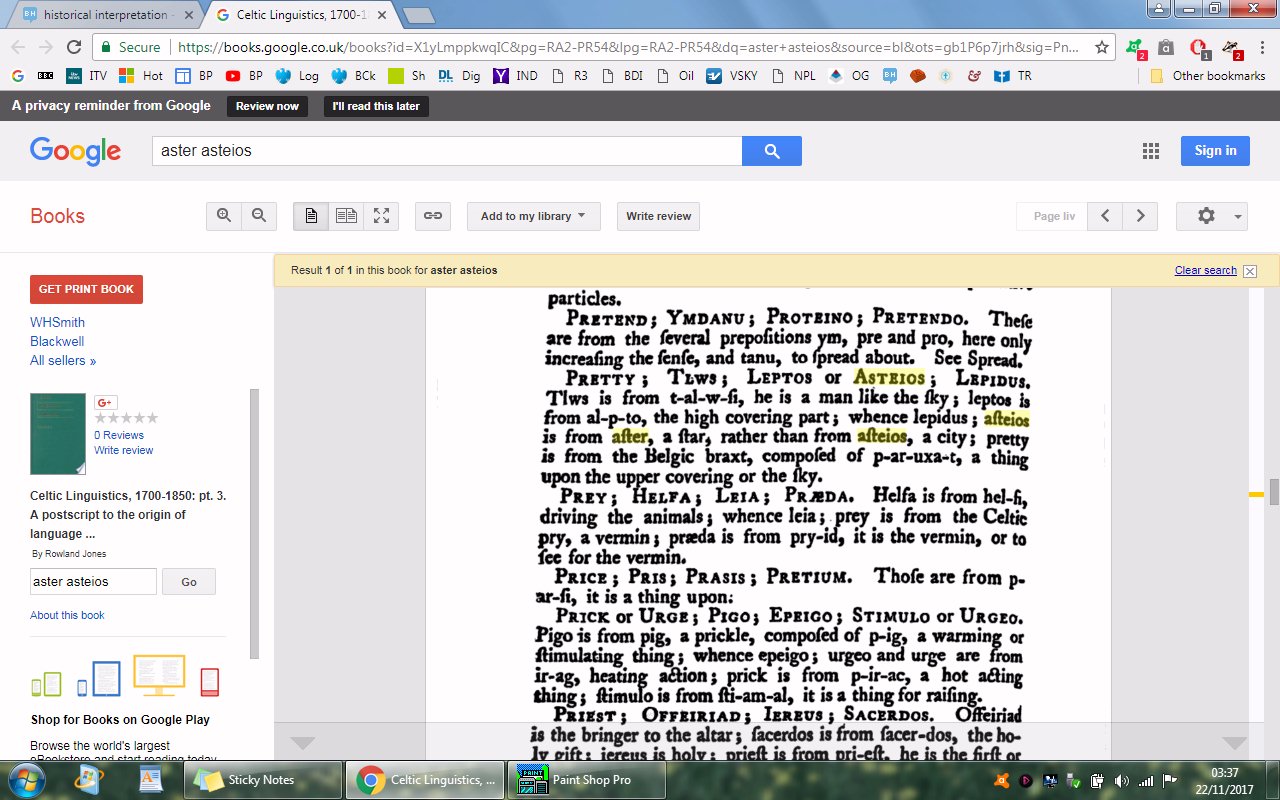 "Wandering stars" were understood to be the planets (Gr. planetes - the word used here), whose transit in the sky appeared quite chaotic in antiquity compared to the paths of the other bodies.

The wandering stars, which are seven1 never rise or set in the same place as they did on the previous day but are seen now low on the horizon at the winter solstice, now high at the summer solstice, and now in an intermediate position at the two equinoxes. So, undoubtedly, so are the heretics, who promise the light of truth and never persevere in the stance they assume in their teaching, but now presenting their teaching in this way, now in that, they themselves certainly indicate how the manifestation of light they promise is to be rejected.2

1. In antiquity, there were thought to be seven such bodies, including the sun and the moon
2. Commentary on the Seven Catholic Epistles (tr. from Latin), p.248

These are all quite interesting and diverse answers. Just like some people enjoy nuts in their fudge, and some don't, we are all so unique and we interpret things just a little different from each other due to individual perception. Here is my take.

There is also the idea that God set them apart for condemnation'long ago'. I think we all understand that we do not understand God's time. But long ago would make me think it was before their conception. Before the heartbeat. Before their life. Did God see this behavior in advance and decide to withhold grace and mercy? I have no idea. But there could be an entire discussion on that point right there.

Then we have the accusation of turning grace into lewdness. Sounds to me like a preacher who is having marital relations outside of the marriage. Be it opposite or same sex relationships.

So if I am even close (I make no assumptions) wandering stars are people who have unpredictable behavior, possibly in ministry and perverting the scriptures to lead others into lewd or debauched behavior, and were condemned before the spark of life entered their little fetus.

And their reward? Blackness of darkness forever.

If we are the sheep, I would give a metaphorical tug on the pastor's hair to make sure they aren't a wolf in costume.

For me, I am looking forward to the void mentioned some day. I have no wish to see *loved ones or my creator. And if the hippies are right , I never want to come back to this world. Ugh. Sounds miserable.

Ungodly men : This is the title given to the Epistle of Jude by the NASB, this is so because ungodly men have slipped into the congregation (verse 4 ) with the purpose of bringing moral defilement. Jude compares these ungodly men to wondering stars and calls them "wild waves of the sea, casting up their own shame like foam; wandering stars," (verse 13)

These ungodly men or wondering stars go from house to house and from one congregation to another [while they feast with you- verse 12 - it was the custom in those days] throwing thrash and dirt and being reckless with regards to God's laws , cast up their own shame like foam.

Below is excerpt from Gill's Exposition on Jude 1:13 on Bible hub.

Wandering stars; they are called "stars", because they have the appearance of such, and blaze for a while, in seeming light, zeal, and warmth, and in fame and reputation; and "wandering" ones, not comparable to the planets, which go their regular course, but to fiery exhalations, gliding and running stars; because they wander about from house to house, as well as from one nation to another, and being never settled in their principles, nor at a point in religion; and wander also after their own carnal lusts, and cause others to wander likewise,

I just enjoyed doing a word study on stars in the Bible and conclude that the wandering stars are angels which fell with Lucifer "who turn the grace of our God into lewdness and deny the only Lord God and our Lord Jesus" (Jude 1:13). Planets dont do that, it makes no sense does it?

Recommend you read the passages which use stars symbollically side-by-side. Find all the ones which appear in a symbolic way and not just talking about the stars in the sky…. [https://www.biblegateway.com/quicksearch/?search=star&version=NIV&searchtype=all]

CONSIDER HOW THEY MAY BE RELATED, WHAT DO ALL THE PASSAGES HAVE IN COMMON? They have authority, (a ruler). Could it be that the star symbolizes a ruler in the Bible? We have seen in some of these contexts, that the star in view is a different type of being....in Revelation 22 the star is Jesus Himself – So symbolizes deity – in another passage, (Job 38) the star was a created being. IN Rev 1 – it is best considered a human being. The species or type of being is not a key part of the symbolism – what they all share is the fact that they are rulers… beings with authority…angels have authority, Jesus has authority, Satan has authority if we take him as a reference in one of those… they are authority figures.

What does a star have in common with a ruler? Both exercise authority Ps 136:9 “the moon and stars to govern the night; His love endures forever. ” they rule at night….

The wandering Stars are God's former heavens, the Fallen creation.

Isaiah 14:12 " how you have fallen from Heaven O star of the morning, son of the Dawn! You have been cut down to the Earth, you have weakened the nation's! NASB

They would be cast down to the Earth and judged.

Then another sign appeared in heaven and behold, a great red dragon having seven heads and ten horns, and on his heads 7 diadem's. And his tail Swept Away a third of the stars of heaven and threw them to the Earth. And the dragon stood before the woman who was about to give birth, so that when she gave birth he might devour her child. NASB

God would make a new Heaven

Revelation 12:1 A great sign appeared in heaven a woman clothed with the sun, and the moon under her feet, and on her head a crown of twelve Stars; and she was with child; and she cried out, being in labor and in pain to give birth. NASB

And these are God's new heavens of which we were all born from, God's New Creation.

Jerusalem which is above is free and she is a mother of us all..." New Creation"

Not the answer you're looking for? Browse other questions tagged greek word-study historical-interpretation jude or ask your own question.

2
What does Jude mean by “mercy mixed with fear”?
12
Jude 7 - What Does “Strange Flesh” Mean?
1
Why are false teachers referred to as “late autumn trees” in Jude 1:12
2
Why did Jude use the word “common” to describe salvation in Jude 1:3?
4
What is the meaning of the Greek words translated as “blackest darkness” in Jude verse 13
4
Jude vs 24: who has the joy?
5
What is the accurate translation of Jude 1:4?
2
What does “dreaming” mean in Jude 8?