In Reveation 8:3-4 the words ταῖς προσευχαῖς are translated in KJV as "with the prayers". Where does "with" come from? Is it translator's extrapolation?

Can the places in question be translated simply "the prayers", so that the verses read:

"...and there was given unto him much incense, that he should offer the prayers of all saints..."

"And the smoke of the incense (the prayers of the saints) ascended up before God out of the angel's hand."

This would mean that incense is actual prayers, not something that is mixed together with the prayers as KJV rendering implies.

Where does "with" come from? Is it translator's extrapolation?

Not so much. The dative can rarely go unsupplemented by a proposition (usually in, with, by etc). At least without doing violence to its function in the sentence in relation to the other parts (imagine replacing 'I am going the house,' instead of 'I am going to the house'—yet if English had a dative form of 'house,' you could perhaps omit a preposition).

That is, it's more intrinsic to the translation than what we would call an extrapolation or 'interpetative license.'

And another angel came and stood at the altar, having a golden censer, and there as given him much incense, that he should thus offer the prayers of all the saints at the golden altar before the throne of God.

The Vulgate has for ἵνα δώσει ταῖς προσευχαῖς "ut daret de oratiónibus" ("that he should offer of/from the prayers...")

However, given that the meaning with the preposition is precisely "the prayers of the saints is symbolized by the incense, then in this case omitting it is actually a better translation.

Revelation 5:8—an explicit answer to the question

"This would mean that incense is actual prayers, not something that is mixed together with the prayers as KJV rendering implies"

And when he had opened the book, the four living creatures, and the four and twenty ancients fell down before the Lamb, each having a harp, and golden bowls of incense, which are the prayers of saints.

St. John might have drawn from/seen the same thing happening (depending on your view of inspiration) as described in the book of Tobit. If so, this further confirms that the angels are offering the prayers of the saints before God whatever way you look at it.

Consider the doctrinal alignment between the two:

When thou didst pray...I offered thy prayer to the Lord. ... For I am Raphael, one of the seven angels who stand [παρεστήκασιν] before [ἐνώπιον] the glory of the Lord.

And I saw seven angels standing [ἑστήκασιν] in the presence of God; and there were given to them seven trumpets. And another angel came, and stood before the altar, having a golden censer; and there was given to him much incense, that he should offer of the prayers of all saints upon the golden altar, which is before [ἐνώπιον] the throne of God.

ταις προσευχαις is dative plural and cannot possibly be the direct object of the verb δωσει. It has to be a dative of accompaniment "with the prayers".

I would translate Revelation 8:3-4 this way:

3Then another angel came and stood over the altar, having a golden censer. And he was given much incense that he might offer for the prayers of all the saints upon the altar ‒ the golden altar before the throne. 4And so it rose up ‒ the smoke of the incense for the prayers of the saints, from the hand of the angel in the presence of God. 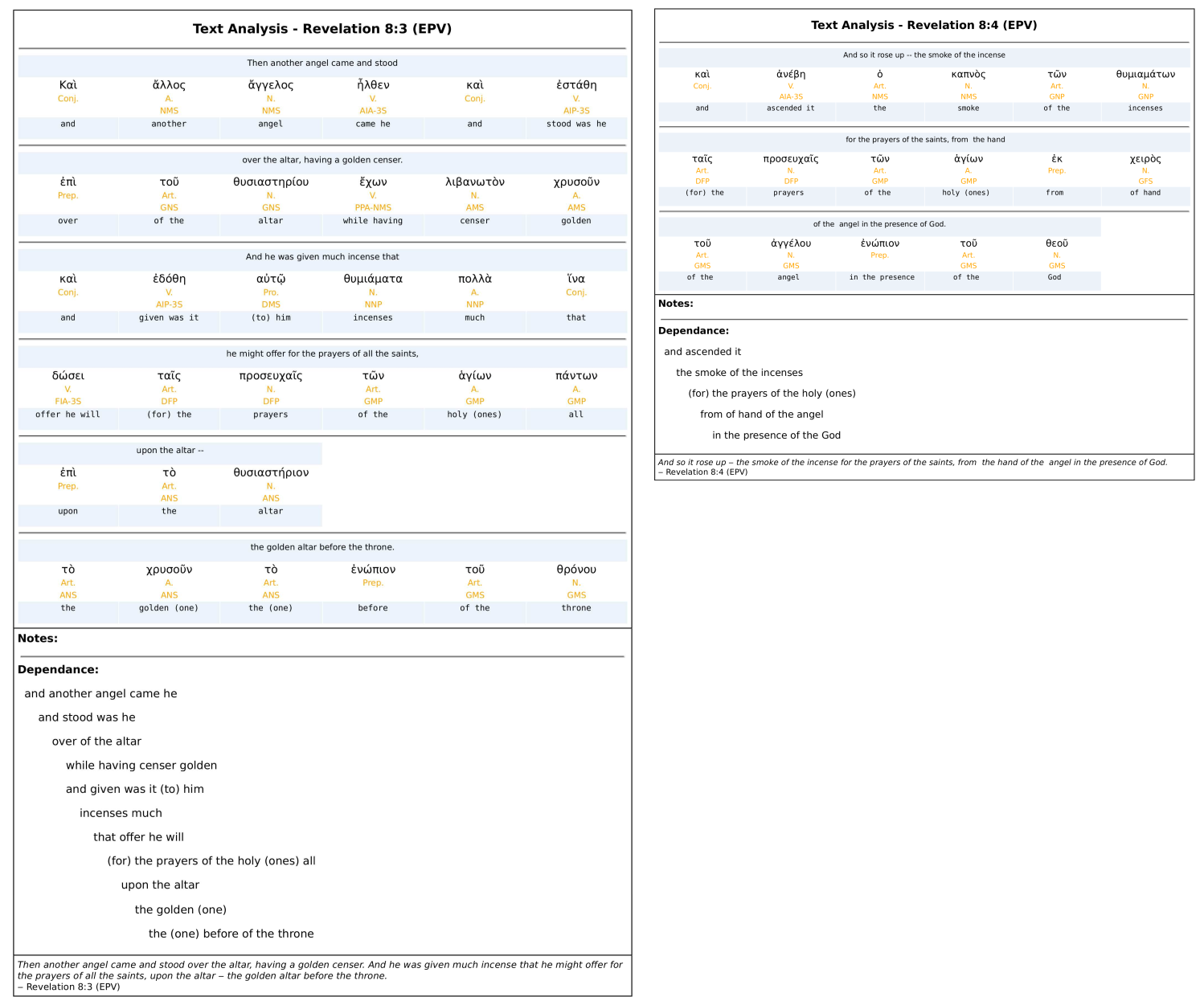 Unless one has a mental image of the Creator with an olfactory system (made of atoms as is the creature's), then the words of John are symbolic of the pleasure the LORD receives from those whose hearts are set on doing what pleases Him.

Not the answer you're looking for? Browse other questions tagged greek or ask your own question.

13
What is the difference between πιστεύων ἐν αὐτῷ and πιστεύων εἰς αὐτὸν?
10
Which idea for εἶδος is intended in 1 Thess 5:22?
5
To what does "assembling of ourselves together" refer in Hebrews 10:25?
6
Sabbath, Sabbaths or week? Matthew 28:1
5
"made Him sin for us" alternative translation
0
"Hitherto asked nothing" alternative punctuation
1
In Ephesians 2:2 is Paul speaking of "mighty works" by "Satan"?
2
What is the difference in the manner of face wrappings?